In retirement, Burlington native returned to Vermont and maintained trails at Bolton Mountain 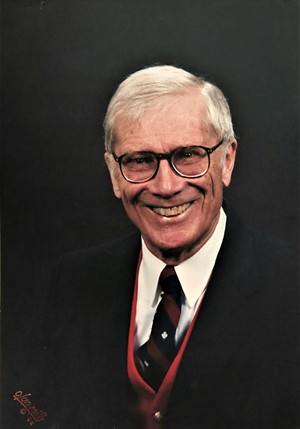 A. Clement Holden, 97, of Burlington, Vt., formerly of Ottawa and Montréal, has died after a long and happy life. Clem was born June 3, 1923, in Burlington, the fourth of eight children of Harry and Charlotte (Clement) Holden.

Clem graduated from the University of Vermont in 1945 after military service in World War II. He had a 43-year career in human resources, beginning in aviation in the New York City area and completing his career as a negotiator with the Treasury Board of Canada in Ottawa, dealing with many collective agreements and unions.

In 1954, he settled in Montréal with his bride, Sylvia Heininger, of Burlington. Clem was employment manager at Canadair (now Bombardier) in Montréal before moving to Ottawa to join Parks Canada as personnel adviser.

Clem and Sylvia raised two sons: Jeffrey, a forester, and Alfred, a journalist. The family traveled to Vermont frequently to visit the senior Holdens, relatives and friends and to enjoy the Heininger summer camp at Coates Island, Lake Champlain.

In retirement, Clem and Sylvia returned to Vermont to be with his mother-in-law, Erna Heininger, and enjoy sailing, skiing, hiking and canoeing.

Clem patrolled trails at the Ottawa Ski Club and was later a charter “old goat” — seniors who maintain cross-country trails at Bolton Mountain in Vermont.

He liked to travel with Sylvia to Western Canada to see in-laws Erika and Alan Sawyer in Vancouver, sail on schooners or do backcountry skiing. They flew to Japan to attend son Jeff’s wedding to Kaori Yamada in Sapporo.

Clem remained a taciturn Yankee. Though not religious, he said, “God bless our dishwasher.” He maintained that “Butter is the secret to long life,” also crediting ice cream, bacon, Swiss Army knives, maple syrup, doughnuts from Dick Mazza’s store and reading newspapers. In the 2010s, hearing a friend tell of the ceremonial burning in 1929 of Burlington’s last streetcar, Clem added, “I was there.”

At home, Clem spent liberally on copper and slate roofs and a concrete driveway. He pushed hand mowers. The family drove cheap cars.

About his work in management, Holden joked, “I don’t get ulcers; I give them.” He said, more seriously, “Anyone who doesn’t like unions shouldn’t be working in labor relations.”

At Treasury Board, he got settlements with Canada's sometimes cantankerous postal unions. Once, he was delivering the Glebe Report, a community newspaper, to a National Capital Commission official. The union negotiators, commiserating in a restaurant off Rideau Street, spotted Clem on the sidewalk. One of them popped his head out and invited Clem to join them at their booth, and they hammered out a deal.

At Chase Aircraft in Trenton, N.J., early in his career, Clem hired many of the engineers who developed the C-123 Provider, a long-lived military transport with an unusual glider variant. When he was a “cub” at Pan American Airways in New York, Clem sat at the meeting table with the iconic founder, Juan Trippe.

Lately he was seen on his hands and knees, pulling dandelions in front of the homestead.

On August 22, Clem walked into the emergency room at the University of Vermont Medical Center with back pain and was told, "This [ruptured aneurysm, in his aorta] is a fatal event." He replied, in vintage Clem, "At my age, I have no problem with that." With family, in a room with a view of Lake Champlain, Clem died that afternoon.

He is survived by his wife of 66 years, Sylvia Heininger; brother-in-law Oskar Heininger of Framingham, Mass.; son Jeffrey and his wife, Kaori, and their children Amy, 18, and Thoma, 13, of Federal Way., Wash.; son Alfred and his spouse, Michel Laverdiere, of Toronto; and nieces and nephews. Few contemporaries remain, and Clem was the last survivor among siblings Katherine, Elizabeth, Harry, William, John, Thomas and Richard.