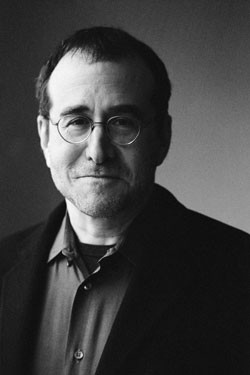 Mark Crispin Miller has a theory about why John McCain picked Sarah Palin to be his vice-presidential running mate.

It’s grounded in two bits of conventional wisdom. First, that George W. Bush was re-elected in 2004 thanks to a huge turnout of Christian “values voters”; second, that should McCain win the White House, it will be because Palin was able to mobilize that same constituency.

From there, Miller, an author and professor of media studies at New York University, ventures off the beaten path into darker territory. He says the Republican Party is intent on “stealing” this year’s election and, if successful, will point to Palin’s spot on the ticket to argue that values voters once again put a Republican in the White House.

“Whenever there is an unexpected victory,” Miller said, “you need a story to tell to justify it.”

Miller is the author of Fooled Again: How the Right Stole the 2004 Election, which documents the methods used by the GOP to alter the outcome of the last presidential campaign. Miller said there was not “a shred of evidence” to support claims that values voters helped re-elect Bush. Rather, research has shown that the number of those voters decreased, and that Bush did less well with them, in 2004.

Miller’s new anthology, Loser Take All: Election Fraud and the Subversion of Democracy, 2000-2008, is a collection of essays that contains “overwhelming evidence” of rigged races, from the Florida fiasco in 2000 to a computerized “man in the middle” scheme that gave Ohio to Bush in 2004.

Miller is in Vermont this week to talk about the recent history of election fraud and voter suppression, and how those tactics are already being used to affect the outcome of the upcoming presidential contest.

Miller, who spoke with Seven Days by phone from New York last week, will also discuss how Americans can ensure that future elections are fair and honest. The first step, he said, is to get rid of electronic voting systems and go back to hand-counted paper ballots.

“That’s the only rational way to conduct an election, and that’s what computer experts overwhelmingly say,” Miller said. “You should certainly not use a highly complicated, overly expensive, totally insecure and absolutely opaque system to count votes. It’s madness, it’s insane.”

SEVEN DAYS: You’ve said that stealing elections is a bipartisan activity, but that Bush and Cheney have used it in an unprecedented way to maintain power.

MARK CRISPIN MILLER: I would put it even more bluntly and say as a way to subvert the will of the electorate. Their agenda is so extreme that I don’t think they could really prevail without illegitimate victories, to be honest . . . That’s not so much of a stretch, you know, considering what else they’ve done. Why is that so hard to believe? I think that’s the first thing they did — that’s why they’re there.

MCM: Election theft involves two sets of activity. One is vote suppression, which can be legal or illegal, but that involves any effort to shrink the size of the electorate before the fact. You can do that by putting restrictions on registration drives, or by passing laws that require certain documentation at the polls, or by what’s known as voter caging — sending people registered letters with forms that if they aren’t filled out the voter is wiped from the rolls.

Step two is where you manipulate the numbers electronically. Not just the voting machines themselves or the optical scanners that count ballots, but also the central vote tabulators, which are computerized, and the voter rolls, which are now computerized. The whole system is computerized, which means you can basically do pretty much what you want with them . . . and the companies that make them are without exception closely tied to the GOP.

SD: Why has this been allowed to happen?

MCM: Because Democrats are sitting there with their thumbs in their eyes, whistling like a bunch of idiots, if I may be blunt, while this stuff is going down. I’ve never been able to get over their passivity, their blindness. I think they just don’t want to go there because it’s too big, it’s too devastating. They don’t have the moxie to face it.

Very few of them — Dennis Kucinich, John Conyers, Robert Wexler, a handful of them — are vocal about this. But the rest of them are acting like it’s not happening.

SD: What about the media’s reluctance to seriously investigate the 2000 and 2004 elections?

MCM: I think a lot of journalists are just too worried about their careers to take a position that might define them as way, way out there, like with the 9/11 truth movement. Let me be perfectly honest: If I were a journalist, if I had to support my family that way, I’d be careful about this, too. I wouldn’t be out here screaming about it. I’m a tenured professor, I have a certain amount of job security, last I looked. I appreciate the problem, but when you’re dealing with a scandal of this magnitude, this affects everything.

SD: Do you think it’ll get their attention if McCain wins in November?

MCM: I do. I think at this point, enough people on the ground will press the point. This stuff is in the air. You’d have to be amazingly obtuse to completely repress the possibility of shenanigans. I’m not saying there won’t be journalists that obtuse, because there will be. I can see Bill Schneider on CNN now, explaining how a candidate with a 14-point lead lost by 3 points. He’ll say it’s because we’re all racists.

SD: Yet you believe this election is at risk?

MCM: These guys have got a lot to lose, and they are in big trouble at the moment. They have taken their best shots at Obama so far, and it’s only hurting them . . .

There’s the possibility that they may be gearing up to nullify the election results. The Republicans have already attacked the early voting in Ohio and, legally speaking, they will have an opportunity, after Bush v. Gore, to declare the Ohio vote invalid. If they do that, they could then argue the entire election is invalid and has to be nullified. We’ll have to have a lot of debate and dithering on when or whether to have a second election. Meanwhile, who’s president? Bush. Bush will just stay there.

SD: How can we prevent something like that from happening?

MCM: A huge turnout is vital. The bigger the turnout, the harder the theft. People will have to double, even triple check their registrations, because in many cases they will be disenfranchised without knowing it. This race has to be the most carefully monitored, and there is every sign that it will be, because there are tons of groups out there. There are hotlines, and help is definitely on the way in that regard . . .

People should not vote the straight party option on electronic machines, because in many cases those votes will disappear. People should not wear campaign hats, buttons or T-shirts to the polls, because whether it’s legal or not, partisan poll watchers will prevent you from voting.

The final step is a psychological one, and that’s not simply to fold up if there is a surprise result, not just to slink home and feel defeated . . . We’ve had an extremist and a lawless government forced down our throats for eight years, and we really won’t deserve to call ourselves the citizens of a free country if we continue to let it go. So this will mean insisting that the press face it. It will mean that the Democrats fight it. But, most importantly, it will mean the people themselves remain well involved and vigilant and not inclined simply to cave in.