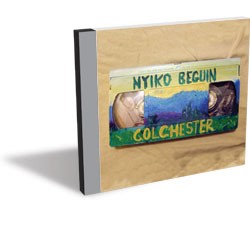 Nyiko Beguin might be local indie music’s answer to famed pop zoologist Jack Hanna. As one half of local duo Whales and Wolves, last year he delivered a promising, if flawed, exposition of indie folk on that band’s debut record, Green and Grey. But it seems the Burlington-based songwriter also has an affinity for chameleons: He fluidly changes colors to suit both his mood and sonic surroundings. His debut solo effort, Colchester, finds Beguin shifting shapes from rootsy chamber-folk singer to gloomy, glo-fi pop impresario. The results suggest an instinctually gifted young artist slowly but surely becoming comfortable in his own skin.

“Blankets and Sheets” opens the album with a flush of trebly synth cascading over blooming, low-end sustains, propelled by light but explosive percussion. In contrast to the snazzy audiotechnics behind him, Beguin croons in a melancholy baritone, with just the slightest trace of a faux British lilt. Smiths-ian vocal styling aside, the song itself is a shades-drawn, bedroom-pop charmer. And honestly, if we’re subtracting points for aping Morrissey, nearly all of modern indie-pop would suffer.

“Off the Ground” is next and exudes a similar retro-hip synth aesthetic. Here, Beguin’s electro machinations are slightly ragged, just a hair out of sync. The effect, seemingly intentional, is initially jarring but ultimately pleasant and humanizing — there is a man in this machine after all.

“Sparks of Spring” is an album standout, balancing confessional lyrical heft with the finer compositional elements teased on Green and Grey.

Following a rather dull instrumental interlude, the album closes on three hit-or-miss tracks. “White Lilies” imparts a vaguely African rhythm as airy, contrapuntal vocals flit breezily through the speakers. “I Could Sleep For Days” is an ambitious, if Dirty Projectors-derivative, head bobber. The awkward “We Can Disappear” closes the album on a low note, as Beguin falls victim to overly crude writing. However, even that song’s flaws do little to detract from an otherwise fine and tantalizing effort.

A cynic might accuse Beguin of jumping on the resurgent popularity of new-wave-influenced synth-pop in more-hipster-than-thou indie circles. And that might even be true. But strip away the Casiotone bells and MIDI whistles, and Colchester presents an often-striking little collection of material that is simply built upon solid, occasionally excellent songwriting. Keep an eye on this kid.

Catch Nyiko Beguin solo this Friday at Radio Bean, and with Whales and Wolves on Tuesday, opening for worldly indie-pop phenoms Fool’s Gold at the Higher Ground Showcase Lounge. Colchester is available for free download at www.nyiko.com.