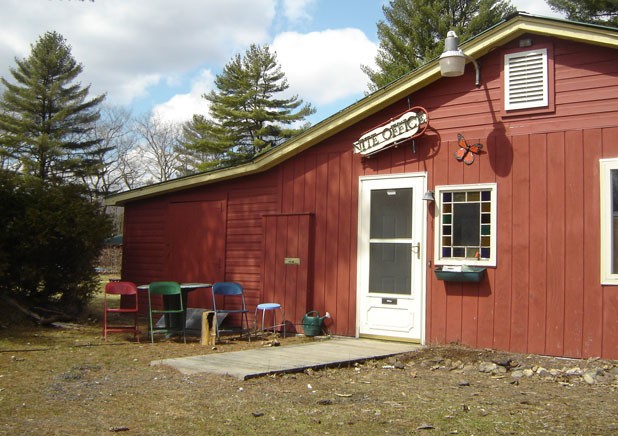 Jaquelyn Rieke doesn’t make art per se, but she considers herself a creative entrepreneur. Six years ago, the 29-year-old Illinois native began manufacturing “Nutty Steph’s” granola at a Montpelier diner “sans any knowledge of commercial food production.” Her granola biz has since grown by 10 to 20 percent annually. Last fall, Rieke opened an 800-square-foot commercial kitchen at Camp Meade in Middlesex, where she makes chocolate products for her onsite Nutty Steph’s Chocolate Shop.

Now Rieke — Jaquelyn is her middle name — wants to rent cheap housing to creative types. At Camp Meade, she lives in the office of a motel that closed in 2007. This May, Rieke will lease 17 adjacent cabins from her landlords, Don and Lise Wexler, in hopes of subletting the unheated red structures to interested artists. Rieke reports that Cabin 1 was recently claimed by a Vermont woman who writes about sustainable agriculture.

Cabins at Camp Meade Artists’ Community, as Rieke has named it, cost $245 per month, or $1200 for six months, if you put down $800 by May 1. She says tenants can paint the cabins, wander Camp Meade’s seven acres of forest and meadows, plant a communal garden, run a breakfast grill in her commercial kitchen, and convert the camp’s former World War II “Victory Museum” into a temporary workspace or gallery.

According to the Barre-Montpelier Times Argus, Camp Meade was built in 1933 for employees of the Civilian Conservation Corps and later became a summer hangout for a motorcycle club. Nutty Steph’s Chocolate Shop currently shares the property with Ann’s Weavery, Grandfield Masonry, Woodchuck Massage and Reiki, and the Red Hen Baking Company.

Rieke suggests that Camp Meade’s history offers a perfect backdrop for the community she wants to create. “Opportunities around communal living and working are ripe right now,” she says of the economic crisis. “This started as a socialist work camp, and that’s kind of along the lines of what it might come back around to.”

As for the empty swimming pool, Rieke notes, “If somebody wanted to start a carp farm, that would be badass!”