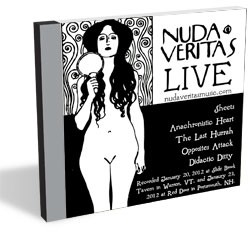 Burlington’s Nuda Veritas has long been a study in contrasts. Her 2009 debut, Songs for Doing Dishes/Still Lives, was a double album that clearly delineated the Burlington-based songwriter’s competing interests. Dishes offered pretty, conventional-ish songwriting that was likely the most accessible music from local experimental label Aether Everywhere. Meanwhile, Still Lives was a challenging exercise in musical abstraction more in line with the rest of AE’s provocative catalog. Veritas’ 2011 record, Verses of Versus, corraled those two disciplines into a single work of remarkable thematic and sonic symbiosis. The album was notable both for the visceral power of her songwriting and its forward-thinking musical dynamism.

Now Nuda Veritas is back with a live EP titled simply LIVE. Pulling largely from Verses of Versus, it’s a chilling work that showcases her songwriting in a stripped-down setting, and sacrifices some of that record’s head-spinning experimentation in favor of stark intimacy. The opening track, “Sheets,” was an emotionally crushing and musically adventurous highlight on Verses; here, with little more than guitar and voice, it intensifies. That sparseness conveys vulnerability as Veritas coos the song’s emotional apex: “I washed you right out of my sheets / so I could be alone when I sleep. / I don’t need you, / Most, most, most of the time. / When I need you you’re not there, / Most, most, most of the time.” That’s not to say Veritas has abandoned her sonic calling cards. On “Anachronistic Heart,” a chorus of looped voices swaddles her meandering musings. “Opposites Attack” is a prime example of her looping prowess, as light handclaps and vocal percussion anchor a pulsing acoustic-guitar theme and prerecorded backing vocals.

But LIVE is perhaps most notable for those moments in which we hear Nuda Veritas, well, nude, musically speaking. “The Last Hurrah” from Songs for Doing Dishes is a gripping guitar-and-voice gem. And EP closer “Didactic Ditty” is a restless ballad fueled entirely by her startling vocal performance and lyrical profundity. LIVE presents Nuda Veritas as more than a merchant of ear candy. She is a uniquely gifted songwriter.