NU Chocolat to Open in Burlington This Month 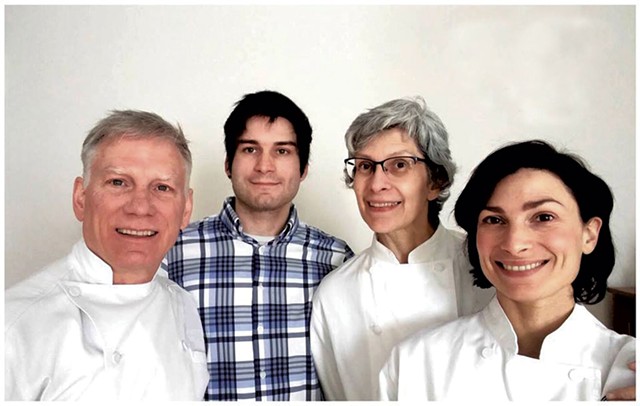 Local sweets connoisseurs may remember Toohey, along with his wife, Laura, and their adult children, Virginia and Rowan Toohey, as the makers of Shelburne's Bijou Fine Chocolate, which closed unexpectedly at Shelburne's food-focused Vermont Artisan Village in October 2017. All four family members are NU co-owners.

When NU's 12-seat retail café goes live, visitors will be able to indulge in handcrafted chocolates, European-style pastries and an array of warm "sipping chocolates," Kevin Toohey said. Retail cases will hold truffles and bonbons, along with candied fruits and caramelized chocolate-covered almonds, all available by the piece or in boxed gift sets.

The shop will also serve tea and espresso beverages, Toohey said, but food service won't be the focus. "First and foremost, we're chocolatiers," he said. "But people want to come in at 10 a.m. and have a cappuccino and something to nibble on." Non-cacao confections will include almond-laced financier cakes in the French style, cookies and other delicate continental treats.

While the Tooheys were the public face of Bijou, they didn't own the business, which fell victim to a conflict between the company's owners and its landlord, Toohey said. The family learned of the chocolate shop's demise upon arriving for work one Monday morning. "Even the light switches were gone," Toohey said, recalling the shock of finding his workplace gutted of everything from production equipment to display cases to personal belongings such as chef's knives.

But great loss can bring great opportunity, and Toohey said he's been astounded by the outpouring of community support. After Bijou closed, he said, "the phone just rang and rang and rang" with supporters wanting to know when they'd be able to get his chocolate again. A subsequent GoFundMe campaign for the new shop yielded more than $12,000. And, since moving to the Queen City, Toohey added, he's felt welcomed by the local food and beverage scene: "All the myths about Burlington's community are true."

The original print version of this article was headlined "Truffle Fix"