NRG Systems Art Collection Takes on a Life of Its Own 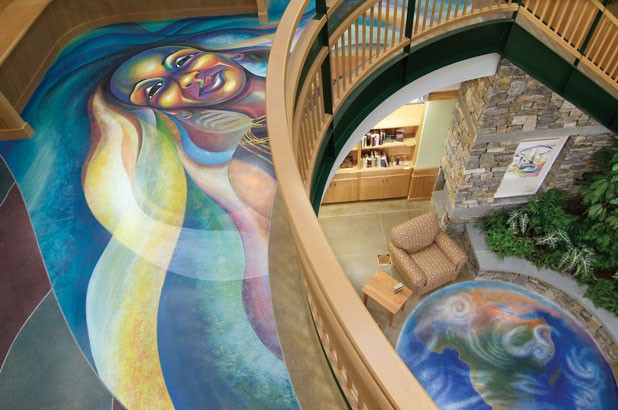 The employees at NRG Systems, an international producer of wind-measurement technology, have it made. Their Hinesburg offices off Route 116 offer loads of places to hang out with coworkers or get cozy with a book. In their ski-lodge-inspired dining hall, lunch is catered four times a week — and smells delicious on a recent visit. Employees pick up their mail from beautiful salvaged bronze post office boxes, each with its own little antique key. And they’re surrounded by a thoughtfully curated art collection that’s expanding every year.

We’re not talking corporate art bolted to the walls; rather, this is unusual work, mostly by Vermont artists, in places you might not expect it. A miniature clay circus procession by Montpelier artist Delia Robinson, for example, separates one workspace from an internal thoroughfare. The focal point is a big-top stage hosting various acts, each with its own sign: “A very small husband!” “Two women wearing the same dress!” “Snakes!” Each clay piece — the tightrope walkers, acrobats, elephant-cow hybrids — is a functioning whistle.

The eclectic collection belongs to CEO and president Jan Blittersdorf, and for the past seven years it’s been curated — and some of it created — by Blittersdorf’s art consultant, Sarah-Lee Terrat. The Waterbury artist and proprietor of YeloDog Design is best known for her murals, which adorn the Vermont Children’s Hospital and the outside wall of the Daily Planet, among many other places.

In 2003, when Blittersdorf and Waitsfield architect William Maclay were brainstorming plans for the first of the two LEED-certified buildings the company now occupies, they knew the place had to offer more than sleek environmental design. “Let’s make sure it’s a nice place to work, too,” Blittersdorf recalls saying.

So they put out a call to artists through the Vermont Arts Council. They weren’t sure exactly what they wanted, but they liked the idea of incorporating some arty and wind-themed design into the polished-concrete floors.

“A lot of corporate art to me is just not very inspiring,” says Blittersdorf. “I had no interest in the silly motivational posters you see. I wanted something different.” And she knew that, though the collection would live in the NRG buildings, she would buy it all herself. “It felt to me cleaner and crisper to just do it on my own, rather than to figure out how to justify it as a business expense somehow,” she says.

When Terrat came in for an interview, Blittersdorf says, “It was clear to me that she was the one. I liked her approach. She was very open to having it open ended.” And Terrat ran with the assignment. Not only did she create 11 concrete discs for the floor, each depicting a different scene from the long history of humans harnessing wind power, but she also adorned other floor areas throughout the building with images of the sun, Earth and more. On the floor of an upstairs “library,” Terrat painted a benevolent wind goddess, cheekily referred to as “Marge” by NRG employees.

Next came the walls. Blittersdorf had planned on curating them herself. “I was gradually going around to art shows and picking stuff out,” she says. “But at the rate I was going, these walls were going to be empty for a long time.”

So she passed that responsibility to Terrat as well. Now, thanks to devoted gallery scouring, the two buildings hold 100-plus pieces by more than 60 artists, including Mad River Valley photographer Amalia Veralli, GRACE artists Merrill Densmore and Larry Bissonnette — the latter was recently featured in the film Wretches & Jabberers — Montpelier painter Frank Woods and many others.

When NRG constructed its second building in 2008, Blittersdorf called on Terrat once again to enhance the floors. The builders left 70 cube-shaped holes in the concrete surfaces that she was asked to fill. This time, Terrat enlisted the help of Montpelier artist Carolyn Shapiro to create cubes of resin, into which the two submerged various found objects arranged with provocative quotations.

Why Shapiro? “I knew she wasn’t afraid of power tools or explosive chemicals,” says Terrat with a smile. Neither of them had worked with resins before. “We nearly set my basement on fire,” says Terrat. But it was well worth the risk.

The resulting “Chiclets,” as Terrat calls them, dot the floors throughout the West Building like mysterious time capsules. In one, a piece of white fabric, a black sweatband and a pair of sleek sunglasses are arranged to look like the face of an Arab man in a headdress. A quotation from the former prime minister of the United Arab Emirates appears where the man’s mouth would be: “My grandfather rode a camel, my father rode a camel, I drive a Mercedes, my son drives a Land Rover, his son will drive a Land Rover, but his son will ride a camel.”

In Chiclets near the downstairs bathroom, you’ll find Shakespearean verse beside Rage Against the Machine lyrics. Another one features a quotation from Terrat’s son, Henry Woodard, when he was 6. Beside a tiny worry doll standing against a swirling background of shiny blue paper, the inscription reads, “I thought I was big … until I saw the universe.”

Most of what goes on in a research-and-development office upstairs is top secret — but not the work of art placed above eye level on a nearby wall. It’s an installation by central Vermont artist Janet Van Fleet called “Music of the Spheres,” composed of assorted discs, including buttons and 45s, arranged on wire fencing. In Van Fleet’s wildest dreams, Terrat explains, a constantly shifting light would illuminate the discs, sending shadows subtly rotating around the wall. An NRG engineer is working on making that happen.

The next big project in the works? In the second-floor walkway that connects the two buildings, Terrat, Shapiro and Anne Lika are creating an educational installation on migratory birds inspired by Blittersdorf’s involvement with the American Wind Wildlife Institute, an organization that works to facilitate wind-energy development while protecting the surrounding wildlife.

Not everyone appreciates all the art — and that’s the point, says Terrat. “Art is supposed to provoke,” she suggests. A Hal Mayforth painting of a flaming skull in the West Café, for example, reportedly freaks out NRG’s chef. Some people are spooked by an elongated figure by David Adix made of keys, paper clips, forks and other junk. Others love it.

For Blittersdorf, collecting art isn’t just about creating a nice environment for her employees; it’s about sustaining local artists. In Vermont, she says, “people come out and look at art, but they very rarely open their wallets and buy the art … if [artists] are going to keep creating this important work, they need to support themselves. That’s what inspired me to start collecting and start actually paying for it.”