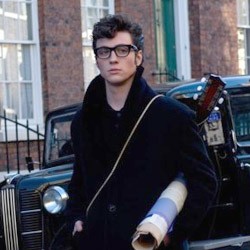 Behind every great man, they say, there’s a great woman. Behind the teenager who would grow up to achieve greatness as the leader of the biggest rock band in history, there were two. One was his mother. The other was the aunt who actually raised him. Nowhere Boy offers a portrait of the artist as an angry, mystified and profoundly wounded young man.

It is not exactly a spoiler to note that John Lennon was abandoned by his biological mother, Julia (Anne-Marie Duff), at an early age and taken in by her sister, Mimi (Kristin Scott Thomas), and Mimi’s husband, George (David Threlfall). This is a matter of lore and well known to much of humankind. It’s also the subject of several Lennon compositions — among them the tenderly yearning “Julia” and the primal scream “Mother” (“Mother, you had me but I never had you”).

Nonetheless, artist-turned-first-time-filmmaker Sam (as in Samantha) Taylor-Wood succeeds in breathing vivid life into these somewhat hoary footnotes (the ex-Beatle would have turned 70 this past October) with a little help from friends who were there. Matt Greenhalgh’s script is based on a memoir by Julia Baird, Lennon’s half-sister. As Baird shared with the audience at last January’s Sundance premiere, the director answered her cell a number of times during production to find Paul McCartney on the other end, calling to offer “some little tidbit, something he remembered about John or about Mimi.”

Aaron Johnson looks and sounds almost nothing like the subject of this biopic yet does a commendable job of nailing his essence. A born rebel who senses he possesses genius of an as-yet-unshaped sort, the young Lennon is something of a caged animal. Aunt Mimi is the definition of prim, a middle-class Liverpool homemaker preoccupied with maintaining an air of propriety. Her husband, by contrast, is a kindred spirit for the boy, a playful and witty soul. He dies early in the film, his death Lennon’s second abandonment.

It is at his uncle’s funeral that the 17-year-old meets his real mother, a music-loving free spirit who, to his astonishment, lives just around the corner with her new husband and their two daughters. The film does a highly credible job of suggesting the conflicting emotions aroused by the discovery. On the one hand, Lennon had to feel rejection and resentment. On the other, he found himself drawn passionately to his mother.

In the course of Nowhere Boy, Lennon also bumps into a couple of local lads named Paul (Thomas Brodie Sangster) and George (Sam Bell) — talk about planets aligning; what are the odds? — but Taylor-Wood knows we know how those relationships turn out. So she wisely focuses on the women in his life.

Scott Thomas does some of the finest work of her career as the buttoned-up, no-nonsense Mimi. Duff is wonderful as her total opposite, and the film makes the persuasive argument that these two very different mother figures were, in fact, required to produce the complex, contradictory personality who would one day become the most famous artist in the world.

Consider the life Lennon lived. Each of its distinct chapters could no doubt serve as the basis for its own movie — the various Beatle phases, the love story of John and Yoko, the long-lost weekend with Harry Nilsson, his years as a house husband, the second coming in his final days. And, who knows, in the course of time they may very well be put on film. With Nowhere Boy, at any rate, Lennon’s tragedy-stricken adolescence and creative awakening receive screen treatment worthy of the man who would leave his mark everywhere.