Nothing to Pass Over | Agriculture | Seven Days | Vermont's Independent Voice

Nothing to Pass Over 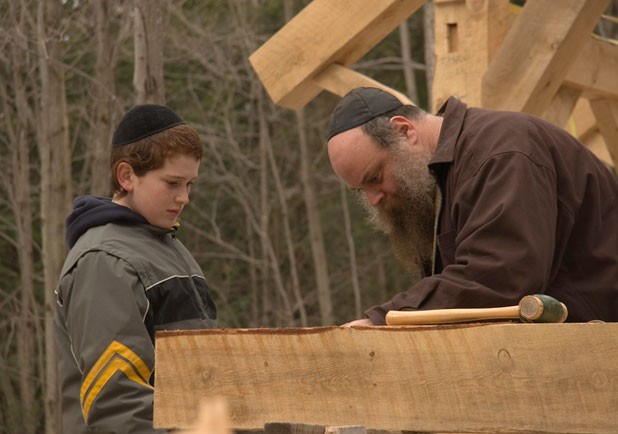 A few years ago, Passover nearly ruined Rabbi Shmuel Simenowitz’s maple syrup business. That spring, the Jewish holiday celebrating the ancient Israelites’ liberation from slavery coincided with the year’s biggest sap run. The day of the holiday, the sap in Simenowitz’s Readsboro sugar bush rose like the Red Sea in the Book of Exodus. So, the Hasidic rabbi and owner of Sweet Whisper Farms, Vermont’s only organic and kosher-certified sugarhouse, called everyone he knew to help him gather as much sap as possible before nightfall.

“At the end of the day, when it’s time to make Passover, everybody stops working — us, the horses, even the non-Jews,” Simenowitz explains. “Nobody can collect on Passover. Nobody.”

When Passover was over, Simenowitz’s friends and neighbors were all eager to know how much syrup he’d produced that year. None, he told them dejectedly. Over the three-day holiday, during which Jewish law prohibits any type of labor, the entire batch had spoiled. “I was dying inside,” Simenowitz remembers. “It was a catastrophic loss.”

At the time, someone asked the rabbi how God could allow such a disaster to occur. Simenowitz still remembers his reply: “You never get hurt doing the right thing.”

To this day, he holds true to that belief, and cites the following story as evidence: Shortly after his sap went bad, Simenowitz got a phone call from Bruce Martell at the Vermont Agency of Agriculture. Martell had been contacted by Oprah Winfrey’s staff at O magazine. They were interested in running a story about a Vermont maple syrup maker, and Martell gave them Simenowitz’s number.

A few months later, the magazine ran a short article about Simenowitz, a New York intellectual property lawyer who’d given up his high-powered legal career to pursue a more bucolic existence as a Vermont rabbi and sugar maker. The article also mentioned Sweet Whisper Farms’ “rent-a-tree” program. For months, Simenowitz’s phone rang off the hook with rent-a-tree orders from all over the country, and his business was saved. As he puts it, “It was nothing short of a miracle.”

Simenowitz says the tale serves him well in his rabbinical teachings. Among other things, it’s one reminder of the many reasons why his maple syrup business is certified kosher, meaning that it adheres to Orthodox Judaism’s strict dietary laws: According to the Jewish laws of kashrut, there’s a right way and a wrong way of producing food.

Other Vermont businesses have reached the same conclusion. It’s difficult to measure the trend precisely — the Vermont Agency of Agriculture doesn’t keep track of kosher-certified businesses, and getting an accurate count would mean contacting all of the 250-plus kosher-certifying agencies worldwide to inquire about Vermont clients — but anecdotal evidence suggests a growing number of Vermont food producers see money to be made in “keeping kosher.”

Moreover, the market for kosher goods isn’t just for devout Jews anymore. According to several Vermont businesses that have been certified as kosher in recent years, an increasing number of consumers want products with a kosher seal. That demand comes from vegans, lactose-intolerants or other conscientious eaters concerned about industrial food production. In the eyes of many people, a kosher seal, like a certified organic seal, is one more guarantee of quality. To paraphrase an old Hebrew National advertisement, it reassures the customer: This business answers to a higher authority than the U.S. government.

Gary Rinkus is owner of Vermints, a small, Vermont-based company that makes breath mints in unique flavors. Several years after the company was founded, in 2002, Rinkus determined that it was worth the extra expense of getting certified kosher. Although Rinkus is not Jewish, he says many Jewish and non-Jewish consumers are “pushing for kosher,” and it’s one more way he can distinguish his product from others on store shelves. “People buy kosher products,” he reasons, “because they know someone is watching the process.”

Many people mistakenly assume that a kosher seal means the food is blessed by a rabbi or, in the case of kosher meats, that the animal is ritually slaughtered. Although the latter is somewhat correct, it doesn’t tell the whole story.

In fact, the complex laws of kashrut address the entire food-production process, and address restrictions on base-ingredient sources, how often the equipment is cleaned, what other products are processed using the same devices and how much time must elapse between those processes. Ultimately, the goal is to prevent the unintentional cross-contamination of meat and dairy products, or the mixing of kosher and nonkosher ingredients.

So, in the case of maple syrup, which appears to be neither meat nor dairy, Sweet Whisper Farms uses a kosher-certified defoaming agent, unlike some traditional sugar makers, who use defoamers derived from pork or other animal fat. What can potentially make a breath mint treif, or nonkosher? As Rinkus points out, about 90 percent of candy products on the market contain gelatin, another nonkosher animal byproduct.

Getting a kosher seal isn’t easy or cheap. For example, Rinkus produces his mints 70 miles north of Burlington, in a Québec plant that only makes sugar-based candies and doesn’t allow the use of nuts. (It’s not that nuts aren’t kosher; Vermints is also certified as nut-free.) Before each production run — and there are four annually — Rinkus pays for a rabbi to visit and inspect the plant, observe the entire manufacturing process, and then sign off on the final, packaged goods — at a cost of $300 per day. Plus, there’s an annual charge of $4500 to maintain the kosher certification. That’s not chump change for a product that retails for $2.99 to $3.49 per tin.

Lake Champlain Chocolates in Burlington is another Vermont business that’s long been certified kosher. David Bolton, who oversees the company’s research and product development, says he inherited the “kosher thing” when he was hired 12 years ago.

“It was a marketing decision,” Bolton explains. “New York City has always been one of our biggest wholesale markets. And to this day, [kosher] is still viewed as a guarantee of quality.”

Since Vermont has no kosher-certifying body of its own, Lake Champlain Chocolates hired a New Jersey firm, Star K, to oversee its production. To get certified, the company had to provide Star K with a list of all its ingredients, processes and products. Star K has a fleet of traveling rabbis who, according to their contract, are allowed to conduct unannounced inspections of Lake Champlain Chocolates’ plant at any time to ensure that the laws of kashrut are being observed. Initially, those inspections were done once per month, Bolton says, but since the company has never had any violations, it’s now down to one every three months.

Bolton wouldn’t reveal exactly how much the kosher certification costs, except to say that it’s “some thousands of dollars.” It’s a delicate matter, because kosher-certifying bodies compete on price. Bluntly put, some are stricter than others and, as a result, cost more. As another Vermont businessman noted privately, “There are different degrees of kosher, and as far as I can tell, a lot of it has to do with the amount of money you’re willing to pay.”

Moreover, a kosher seal does not mean that a product is “kosher for Passover,” which this year begins on Wednesday at sundown. As Rabbi Simenowitz explains, the kashrut laws are much stricter during Passover and allow for fewer exceptions. This year, even his own maple syrup won’t measure up to “kosher for Pesach.” During other times of the year, if one breadcrumb fell into a 1000-gallon vat of syrup, that bread crumb could be religiously nullified. “But on Passover,” he says, “you don’t get any breaks like that.”

One Vermont business that is considering kosher certification is Naga Bakehouse in Middletown Springs. This year, Naga is test-marketing “Vermatzah,” a round, handmade version of the traditional unleavened Passover bread. According to Naga co-owner Julie Sperling, Vermatzah isn’t certified kosher — “This year, it was simply a matter of time” — it’s “eco-kosher.”

Sperling likens the “eco-kosher” brand to the process of transitioning from conventional to organic farming, wherein businesses adhere to organic practices but may not go to the added expense of getting the “certified organic” seal. In fact, her own business uses all organic products and avoids pesticides, herbicides and other farming practices that are potentially harmful to the land. Eco-kosher, she says, “is a way of getting the sentiment of what we’re doing, without necessarily the legal blessing.”

Interestingly, the term eco-kosher has become a hot topic of debate within the world of kosher food production — and one that may soon attract more adherents among Vermont’s socially conscious foodies. The term is often used to indicate an adherence not only to the traditional Jewish dietary laws, but also to more modern ethics concerning industrial agriculture, the humane treatment of farm animals, fair-labor practices and other environmental and social justice issues.

According to Rabbi Arthur Waskow, author of the 1995 book, Down-to-Earth Judaism: Food, Money, Sex and the Rest of Life, eco-kosher asks whether foods that are made according to the strictures of kashrut should still be considered kosher if they’re produced with the use of toxic pesticides, inhumane factory farming or electricity generated with nuclear power.

During his own farm’s operations, Rabbi Simenowitz also adheres to ecologically sustainable and organic practices. In fact, Sweet Whisper Farms primarily serves as a teaching facility that promotes such values.

That said, however, Simenowitz, who claims to be very much on the forefront of this debate, says he’s skeptical of eco-kosher’s “slippery slope,” whereby the agendas of the animal-rights movement, the labor movement and environmentalists are “grafted” onto the ancient Talmudic rules.

For instance, in his sugarhouse, which is a wooden replica of an 18th-century Eastern European synogogue, men and women pray separately, as is the custom among Hasidic Jews. People who are more egalitarian about their religious worship may find such a practice offensive, Simenowitz says. Nevertheless, that shouldn’t nullify the sacredness of his syrup.

“As we get spiritually more mature, we elevate the debate from what we can and can’t do to what we should and shouldn’t do, and then it takes on a deeper sense of meaning,” he adds. “But don’t tell me my syrup isn’t kosher.”