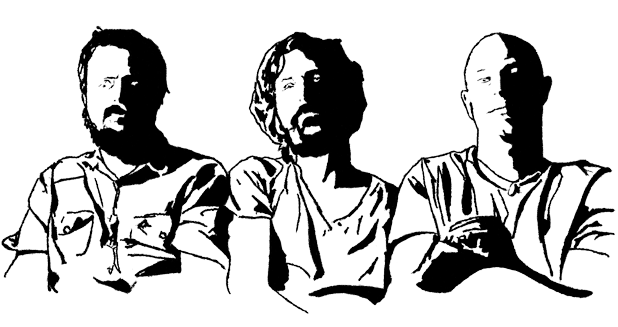 Since releasing their debut album in 2006 — under the short-lived name House Horse — experimental folk trio Farm have ascended as a uniquely artistic local entity. Their follow-up efforts, Grey Birds (2007) and The Cave (2008), were among the finest local releases, in any genre. Their latest attempt, Sat., Cloudy, Calm, 36°F, 10:44 p.m., may even outstrip those brilliant records.

On a recent Saturday afternoon, while the rest of Vermont basked in the glory of summer’s last gasp, Seven Days holed up with Farm’s Ben Maddox, Jedd Kettler and Joshua Givens in the Cave of Legends, the dingy, dimly lit practice space the band shares in the basement of Enosburg Falls record store the Flying Disc. Over warm beers and cigarettes, and in advance of the band’s album release party this Saturday at The Monkey House, we went through the album track by track to discover how one of the year’s best local records came to be. And also, whether the late Jay Bennett was a genius or just a drug-addled asshole.

The album’s opening track introduces a new approach for Farm, both literally and figuratively. Much of the disc was recorded in independent home sessions, with band members emailing each other pieces of songs they had recorded solo.

“The first time we played this song live together was in rehearsal for the release show,” says Givens. “But this is the first fully developed song we recorded piecemeal.”

Sonically, the song suggests a new mindset, as well, at least for this album. Where previous Farm records featured unwieldy freak-out jams and an almost overwhelming amount of music, 10:44 is comparatively trim, checking in at a digestible 11 tracks and 42 minutes. Part of that is a relative shift toward more straightforward song structures, as on this one.

“I wrote this never expecting it to be a Farm song,” he says. “But the cool thing about recording separately is that you find yourself surprised by what everyone else comes up with. Like Ben’s piano part, which, to me, is totally unexpected.”

On cue, Maddox’s rippling keystrokes emerge through the speakers above a mangled guitar line.

“That raises the IQ of the song quite a bit,” says Kettler.

“River to the Ocean”

Unlike the preceding tracks, the chaotic “River to the Ocean” was tracked live, evolving out of the band’s early jam sessions. It also features Kettler’s favorite bass sound.

Givens wrote “Getting Cold” six years ago, not expecting it to become a Farm song.

“This is an old-ass song,” he says. He originally recorded the tune as a home demo, and though it has been completely rerecorded, the idea was to mimic the cold, lo-fi intimacy of that first attempt. Subtle, brooding and subversive, the song does just that.

“Sometimes we’ll bring demos to the band and they’re really good, and it’s, like, ‘Why the fuck don’t we just use that?’” adds Maddox.

“I would be interested to know if you can listen to this and figure out who played what,” Maddox says, chuckling.

A musical-chairs approach has long been a hallmark of the band, with members switching instruments on nearly every song. “Anticipating Snow” is a blustery, cacophonous gem that fully embodies that habit.

“This song is just an evil mood,” says Kettler, who penned it in a fit of anger. The song features “irritating fiddle sounds” that, as Givens points out, serve as a “major character” in the arrangement.

“We’ve never really done a song like this,” adds Kettler. “It was therapeutic.”

“On this song, we made a concerted effort to let a pretty song just be a pretty song,” says Kettler of the album’s, well, prettiest song. “We decided, for once, to use our powers for good.”

“But the idea is that this is homemade music,” says Givens, interjecting. “And is it wrong to think that just because we made it here, it’s as beautiful as something more people have heard?”

“The story behind this song is … well, Ben got a loop pedal,” says Kettler of the electronica-tinged “Hotel Manners.”

“This song broke all of our hearts,” says Kettler. “It really is a beautiful song.”

It really is. Over trembling Wurlitzer, a strange, familiar sound cuts through a hazy melody — Givens coaxing tones rubbing the rims of wineglasses.

“That kinda says it all, right?” says Kettler.

“Dented Nails” is another tune that didn’t begin life necessarily as a “Farm song.” It’s part of a batch of music Kettler has written that may or may not one day appear as a solo release. But, among the new album’s tunes, it’s the most clearly representative of one person’s personality, as opposed to being subsumed by the group’s collaborative aesthetic.

“The thing I love about this song is that it feels as though you’re just having a conversation with Jedd,” says Maddox.

“Blueprints” is easily the album’s most overtly pop-styled number. But it didn’t begin that way.

“There is a bombastic version of this song, too,” says Givens. “I hated it. I found it very obnoxious.” Unbeknownst to his bandmates, Givens recorded a new, leaner version of the song, which is essentially what appears on the album — though not without some inital resistance.

“It doesn’t sound like a hard part, but it is,” says Kettler of Hadeka’s work. Givens notes that few Farm songs have traditional drum parts.

“But that’s exactly what we wanted here. It’s a simple pop song,” he says.

The album’s benediction is a chilling instrumental elegy to the late Jay Bennett, best known as the fantastically talented, if mercurial, foil to Wilco’s Jeff Tweedy. But Maddox suggests the multi-instrumentalist may not have been quite the petulant diva he was portrayed as in I Am Trying to Break Your Heart. The documentary film chronicled the bizarre story behind the Wilco album Yankee Hotel Foxtrot, and painted Bennett as a belligerent malcontent who complained his way out of the band.

“I hate that people watch that film and think Bennett is just a drunken idiot,” says Maddox.” “On their seminal albums, Bennett was a creative force. I wish people would remember him as a great musician and not just a coked-up dickhead.”

As the song’s shimmering, final notes fade away, the question arises: Would Bennett approve? After a moment, Kettler speaks.

“Nah,” he says, exhaling a plume of cigarette smoke. “He’d probably just be a coked-up dickhead about it.”