Book review: Promise Not to Tell by Jennifer McMahon 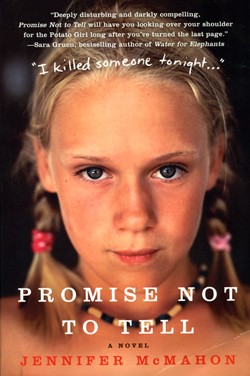 Probably any adult who remembers middle school also remembers someone like Del Griswold, a central figure in Promise Not to Tell, the debut novel of Barre resident Jennifer McMahon. In the rural Vermont town of New Canaan, Del is known as the "Potato Girl" because she smells of "moist earth, forgotten vegetables." Held back two grades, this youngest child of an impoverished farm family wears hand-me-downs and exhibits major attitude. Until she's brutally murdered in 1971, at the age of 12, Del is simply "the kid all the others loved to hate." After her death, she becomes a local legend, rising from her grave to haunt new generations of kids who imagine her stalking the woods, stinking of rotten potatoes.

But is it just a legend?

The cruelty of adolescence is fertile ground for horror fiction - nobody will ever forget how a high school pariah struck back in Stephen King's Carrie. Promise Not to Tell recalls that novel, but it also aspires to be something more "literary" - a tale of female friendship and betrayal in a bleak rural setting, with echoes of authors such as Alice Munro. It doesn't succeed, but its intriguing setup makes it worth a look.

The novel's protagonist and main narrator is Kate Cypher, a 41-year-old nurse whose past links her to Del. In 1971, preteen Kate was an outcast of a different kind: She and her mom came to Vermont to join an off-the-grid commune called New Hope, just up the hill from the Griswold farm. The novel is split between flashbacks to this period and a narrative set in 2002, when Kate returns from her home in Seattle to care for her mother, who has Alzheimer's.

On Kate's first night back in town, a local girl is slain in a manner identical to Del's unsolved murder. Opal, a child of the commune where Kate's mom still resides, thinks she saw a white-robed phantom fleeing the scene of the crime. Nicky, Del's older brother and Kate's childhood crush, is also inclined to believe in ghosts.

Kate is skeptical. But when she finds a relic of Del tucked in her purse - a toy sheriff's star that hasn't been seen since the original murder - she begins to wonder whether someone is haunting her, or simply trying to frame her for the new crime. Perhaps someone knows the secret Kate never told for fear of social ostracism - that she and the Potato Girl were "blood sisters."

From its first chapters, Promise Not to Tell promises to be the sort of thriller that gets under your skin. Not only does this Gothic little town have two unsolved killings and a possible potato-reeking specter, but the idealistic New Hope community turns out to have hosted a soap opera's worth of sexual entanglements. Finally, Kate faces a more mundane threat: Her mother, in the throes of dementia, wreacks havoc when she's not locked in her room at night. Good suspense novels play on real-life fears, and McMahon gives herself many opportunities to do just that.

Her technique lets her down, however. The novel's greatest flaw is that the narrator, whose name asks us to see her as a cipher, insists on spelling everything out. She has a bland, chatty voice and a penchant for clichés, as when she explains the reasons for her divorce: "My ex-husband, the successful cardiologist, broke nearly as many hearts as he fixed." Time after time, a passage that could have been intensely creepy if it were narrated straight goes flat because Kate has to tell us how to read it. "It was in that moment that my subconscious fears came crashing forward into my conscious mind," she announces portentously at one point.

Part of the novel's suspense comes from the possibility that Kate's voice isn't reliable. But McMahon doesn't show that she has the skill needed to maintain such ambiguity. The Alzheimer's subplot, which raises the disturbing possibility that Kate is poised to discard her mother the way she disowned Del, is too easily resolved. There's nothing surprising about the novel's final twist, and some climactic scenes have a hokey, B-movie quality.

That's too bad, because the obdurately real character of Del will stick with the reader after the plot has gone through its paces. McMahon is devastating when she paraphrases the town's view of the murdered girl: "What fate could you expect for a girl like Del - dirty, mouthy, running wild all the time, probably half-retarded?" With her "desperation masquerading as charisma," the Potato Girl defines "scapegoat" - in myth and legend, a ritual sacrifice that brings communities together. Kate's narrative gives her back her humanity.

From Promise Not to Tell:

"Just listen, will you?" [Nicky] eyed me impatiently. Satisfied by my silence, he leaned forward and continued, his voice low and secretive.

"There were no potatoes in the house. Not a single one. Artie hated them. Wouldn't let his wife buy 'em. But when the coroner did the autopsy, he found a chunk of raw potato lodged in Artie's windpipe."

I laughed again. "And I suppose you saw the coroner's report? Or better yet, you talked to him yourself?"

"Nicky, he probably had a heart attack. But that doesn't make for good storytelling, so little by little, the tale of his death got embellished. That's the way it is in this town. Even the craziest rumor becomes fact by the time it gets to the third set of ears."

"No, it wasn't a heart attack," Nicky affirmed. "He choked to death. His wife even said so. They ruled it an accident, but a lot of folks know better. I know better. The son of a bitch was murdered."

"Murdered by whom exactly?" I asked.

"Oh, come on, Kate. Do I have to spell it out? First Artie and the potato, now Ellie's daughter in the woods, killed the exact same way Del was. It's her, Kate. It's got to be her."

I wasn't following. Or maybe I didn't want to follow. Not going down that road, no sir. Not me.

"What are you talking about, Nicky? Her who?"

I paused a moment before saying anything. I thought about the stories I'd grown up hearing, how they got more tangled every year. Through her murder, Del took on mythic status. Three decades of kids had grown up not being able to say when New Canaan had been incorporated, or the name of the tribe of Native Americans who called the whole valley home first, but they all knew the Potato Girl stories. The jump rope rhymes. The jokes. Kids at slumber parties would sit in front of a mirror in a darkened room, chanting Potato Girl, Potato Girl until she appeared, sending them screaming for the light of day.

Del would have loved it, of course. Relished her power to inspire fear. But to propose that these stories were real? That there really was a Potato Girl - Del back from the grave - who haunted the woods, seeking revenge, actually killing people. Did they believe in the Headless Horseman, too?

Jennifer McMahon reads from Promise Not to Tell at Borders, Burlington, April 15 at 2 p.m. and at Bear Pond Books, Montpelier, April 24 at 7 p.m.