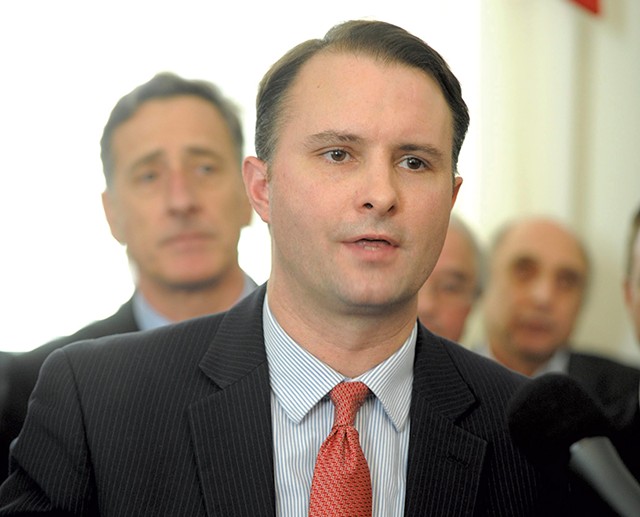 Gov. Peter Shumlin's 2014 State of the State address about Vermont's opiate "crisis" got plenty of national media attention. The legislature followed up with Act 195, a 21-page law that includes initiatives designed to fight drug addiction. It established tougher penalties for out-of-state heroin dealers, expanded and reorganized the state's drug-treatment system for inmates, and set new regulations for prescribing and monitoring prescription medication.

It also sought to encourage prosecutors to create programs to get drug addicts out of the courts and into treatment. The model to attack addiction and related crimes was Chittenden County's Rapid Intervention Community Court, which offers repeat offenders with addiction problems or mental health issues the chance to have their criminal charges dropped in exchange for completing counseling and treatment. A 2013 Vermont Center for Justice Research study found that defendants who went through the program were three times less likely to commit new crimes than those who went through the traditional court system.

At Shumlin's urging, officials hoped to replicate the RICC program in every Vermont county.

But more than two years and $1 million later, experts say the efforts to establish "pre-charge" programs — so called because they prevent charges from being filed in court — have resulted in little progress across Vermont.

"It's very well-intentioned, but as of right now it really has had no effect at all on the justice system," Defender General Matt Valerio said.

Even Senate Judiciary Committee chair Dick Sears (D-Bennington) said the program has been "somewhat of a disappointment." The chief architect of Act 195 said, "It hasn't got up and running as we anticipated."

Aside from Chittenden, only Lamoille, Windsor and Rutland counties have launched significant pre-charge programs since the law was passed. Other counties have experimented with the programs, but have yet to commit to the idea.

An estimated 14,000 Vermonters could be eligible for pre-charge programs, according to Annie Ramniceanu, who until recently oversaw a team of state-hired monitors charged with identifying defendants accused of lower-level crimes — outside of Chittenden County. They have only interviewed 1,000 of them. And only 22 people have completed a pre-charge program, according to Robin Weber, director of research for the Montpelier-based Crime Research Group, which monitors some state programs.

"The numbers are very small," Ramniceanu acknowledged in an interview. "It hasn't been robust. We're reaching a subset of a subset."

Last week the Shumlin administration quietly transferred responsibility for the pre-charge program from the Department of Corrections to the Attorney General's Office. The move was widely interpreted in legal circles as a sign that administration officials are unhappy with the pace of progress, and hope to hand the initiative over to Chittenden County State's Attorney T.J. Donovan. The Democrat is considered the front-runner in the race to replace outgoing AG Bill Sorrell and launched the rapid-intervention court.

"The governor ... recognizes that these are complex changes that involve 14 independent state's attorneys, defense attorneys, judges, police departments and sheriffs, as well as treatment providers," Shumlin's office said in a prepared statement to Seven Days in response to questions about the transfer. "He recognizes that buy-in in each county is a process that may take longer in some places."

What happened? The original idea was to hire 11 "pre-trial monitors" who would fan out to every state criminal court. They were to work with prosecutors and judges by interviewing defendants to see if they would benefit from being taken out of the court system and placed in a rapid-intervention program.

With a $1.1 million contract, the DOC contracted with the Lamoille Restorative Center, a Hyde Park nonprofit that has provided services to criminals and victims. The DOC employed Ramniceanu to spearhead the project.

Ramniceanu told Seven Days that bureaucratic delays and resistance to change slowed her progress. For example, she said she struggled for months with what seemed like a simple task: establishing a system to notify monitors when a person is arrested, so they can quickly arrange interviews to see if a defendant warrants placement in treatment programs.

Ramniceanu said the Department of Public Safety was nervous about disseminating arrest information, and there were problems syncing the data-management systems that track arrests. It took five months to establish a system.

Even then, it lacked crucial information: phone numbers for defendants. Resolving that issue took a few more months.

A bigger obstacle, observers say, is the structure of Vermont's criminal justice system: State's attorneys are elected county by county to four-year terms and have almost total control over how cases are prosecuted.

Legislators did not mandate the creation of pre-charge programs in Act 195. So the state's attorneys were free to ignore the programs, even as state-hired monitors started working in their jurisdictions.

"If a state's attorney says, 'I don't want to do pre-charge,' then there's not a lot that the monitor can do," said Robert Sand, a Vermont Law School professor and former Shumlin administration official. "They can [perform] risk-and-needs screening, but they can't force anyone to do anything with the information that they provide."

He added: "Either there needs to be significant prosecutorial leadership ... or the legislature has to require pre-charge programs. Because we've seen all too frequently, in a variety of issues, that if you just wait for things to roll out on an ad hoc basis, it can take a very long time."

David Cahill, the Windsor County state's attorney and former head of the Department of State's Attorneys and Sheriffs, said prosecutors understand the value of pre-charge programs. But they have been reluctant to implement them without the certainty of available drug-addiction treatment. More often than not, there are waiting lists for rehab in Vermont.

"It was mostly talk and not a whole lot of substance to back up that talk," Cahill said of Act 195, which provides funding for monitors but not training for state's attorneys on how to administer the pre-charge programs.

The monitors, who are paid around $35,000 annually, are conducting screenings of defendants before their initial court appearance, acting as de facto social workers. The information they gather about the defendants' needs is passed on to prosecutors, defense attorneys and judges.

But the numbers suggest that in the past year, each monitor has interviewed between one and two defendants a week.

"It's of little or no value at all," Valerio said dismissively. "By and large, nothing is going on."

Sears said he intends to hold hearings during the upcoming legislative session to better understand the slow rollout. But he's no less optimistic about the long-term future of pre-charge programs. The influential senator compared its halting progress to Vermont's effort to establish child sex-crime investigators in every county. That initiative, which came from a 2009 law, took years longer than planned to carry out but now is considered a success, he said.

"There are always growing pains, and that's part of this whole process," Sears said. "When it comes to criminal justice, there are no silver bullets."

Donovan said that if he is elected attorney general, he will cajole state's attorneys to launch pre-charge programs.

"It's got to be driven by the prosecutors, because we're the gatekeepers; we have the discretion on whether to charge or not," Donovan said. "I'm not a believer in mandates. What I'm a believer in is demonstrating that these programs are effective."

A few other state's attorneys are sold. In January, Shumlin appointed Cahill as Windsor County state's attorney to fill a vacancy. Though Cahill has voiced frustration about how the initiative started, he quickly created a pre-charge program in the county.

It started in May and has already admitted 70 people, he said.

"We're going all in on this," Cahill said, adding that it's the right thing to do. "We know that positive reinforcement, incentives and support are the best way to get people suffering from substance abuse and mental health issues back into society and out of corrections."