Opinion: Not Getting It 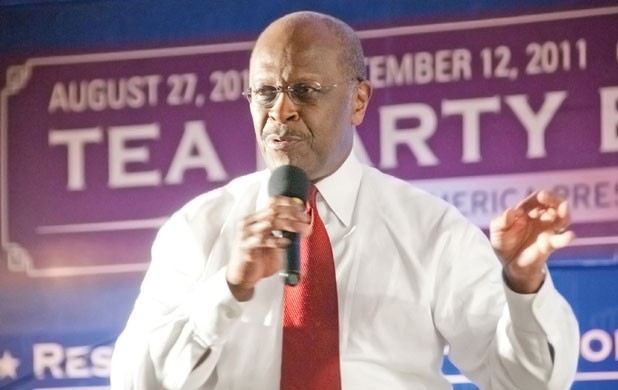 That’s what women were saying almost exactly 20 years ago, when the U.S. Senate endorsed Clarence Thomas’ nomination to the Supreme Court. Law professor Anita Hill had come forward with precise and sickening details of the nominee’s campaign of sexual harassment 10 years before that. Hill told how her boss bragged to her about his penis size and his prowess at oral sex, discussed pornographic movies and picked up a Coke can and asked who had left a pubic hair on top of it.

You couldn’t make this stuff up. Yet Thomas’ champions interrogated Hill as if she had. After his famously smarmy performance, Republican Pennsylvania Sen. Arlen Specter emerged from the hearing room to announce: “Her credibility is demolished.”

First time tragedy, second time farce? It may have seemed that way recently, when one and then — at this writing — two more women revealed they had been sexually harassed by Tea Party darling Herman Cain, and the presidential hopeful responded that he, too, was the victim of a high-tech lynching.

As in 1991, Cain’s conservative white pals rose up against an imagined left-wing conspiracy incensed by the idea of a black conservative (that was before it became a Rick Perry campaign conspiracy). The only difference this time around is that the leggy blond blowhard on the team is Ann Coulter, not Laura Ingraham.

Cain is a jester to Thomas’ seething villain. But in the context of current politics, this rerun of history is worse than farce, worse than tragedy. It’s a horror story.

For one thing, 1991 was the beginning of what felt like a rebirth of the women’s movement. During the hearings, Americans expressed more sympathy for Thomas than for Hill. But feminists changed the conversation. “They just don’t get it” became a national rallying cry, not only about elected officials but about men in general. George H.W. Bush felt enough pressure to sign the Civil Rights Act of 1991, which strengthened the enforcement of workplace-discrimination laws, giving plaintiffs the right to trial by jury and damages for emotional distress. Then, in 1992, national elections swept an unprecedented number of female congressional candidates — many of them openly feminist — into office, along with Bill Clinton, who campaigned with the tough, smart, egalitarian Hillary by his side.

Today? Sarah Palin and her grizzly sisterhood call themselves feminists (though — thanks for small blessings — Michele Bachmann renounces the label).

In response to Obama’s health care reform law and new federal rules requiring insurers to cover contraception and other reproductive medicine without copays, congressional anti-choicers are pushing the Respect for Rights of Conscience Act. The regs already allow religious institutions to opt out, but that’s not enough for supporters of the RRCA, which would exempt any employer, insurer or health care provider from offering “specific items or services ... contrary to ... religious beliefs or moral convictions.” That, some Democrats have pointed out, could mean drug rehab or treatment for gay people with HIV/AIDS.

The Center for Reproductive Rights reports that in the first half of 2011, state legislatures passed more than 50 measures restricting abortion and undermining preventive care and family planning. In Mississippi, a state constitutional amendment defining a person as “every human being from the moment of fertilization, cloning, or the functional equivalent thereof” looks likely to win voters’ approval. Although the amendment doesn’t use the word “abortion,” it would equate the termination of a pregnancy with murder, with no exception for rape, incest or protection of the mother’s life. Doctors have said it would criminalize most contraception and even miscarriage. But opponents aren’t fighting the proposal on the grounds that women have a right to choose their reproductive destinies. They’re appealing to “pro-life” voters in hopes that they, too, will find the wording so vague that the amendment could, for instance, allow fetuses to be counted as persons in carpooling lanes.

According to Personhood USA, similar amendment campaigns are underway in 13 other states.

In case you think this is all just political fanaticism — which it is — and women’s sexual equality is alive and well ... it isn’t. In Egypt, Mubarak’s probable successor, Hazem Salah Abu Ismail, is clarifying his vow to bring reasonable Islamist law to the country by telling a TV interviewer that, under him, women wearing two-piece bathing suits on the beach would be arrested. Even the Occupy movement is keeping a safe distance from sexual politics (in spite of the whiff of feminism I described in the last column). We are the 99 Percent?

And this just in, from the September issue of the journal Sexologies: A new sexual dysfunction has been identified — “female premature orgasm,” defined as climax that occurs with “minimal stimulation” or “sometimes even before intercourse.” Nothing is safe, gals — not even the clitoral orgasm.

By the time this column runs, Herman Cain may have fallen on his own, or someone else’s, sword. Last week, Politico.com published more corroboration of the first accuser’s narrative of Cain’s advances at a National Restaurant Association group event: “The woman told one of the sources Cain made a suggestion that she felt was overtly sexual in nature and that ‘she perceived that her job was at risk if she didn’t do it.’” You could hardly ask for a clearer legal definition of sexual harassment.

But Cain’s supporters don’t seem to care. He is receiving ecstatic ovations and raising money like a house afire. A Washington Post-ABC poll released the day after those revelations found that 70 percent of Republicans said the accusations would make no difference in their votes. Fifty-five percent of the respondents viewed the reports of sexual harassment as “not a serious matter.”

Judging from everything he’s said and done, Cain feels the same. Beyond the potential political fallout, he seems to think that pressuring a woman to have sex (or electrocuting an immigrant) is a joke. Maybe Thomas felt the same way about Hill. Or maybe neither guy noticed what he was doing.

They, and a lot of Americans, still don’t get it.