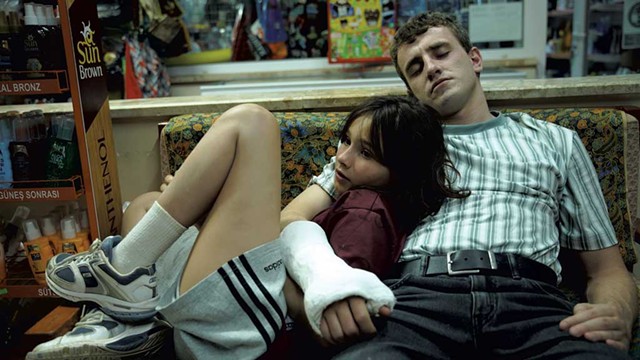 Every autumn brings a new crop of prestige films, some of which are shoo-ins for Oscar consideration while others lack the mainstream appeal to gain a voting majority. For moviegoers willing to gamble on something new, however, the latter group often contains the best surprises.

Case in point: this debut feature from Scottish director Charlotte Wells, which won a jury prize at the Cannes Film Festival, screened at the Vermont International Film Festival, and is currently playing at the Savoy Theater and Merrill's Roxy Cinemas.

In the era of the "Macarena" dance craze (i.e., the 1990s), young father Calum (Paul Mescal) and his 11-year-old daughter, Sophie (Frankie Corio), take a package vacation to Turkey to soak up the sunlight. The two don't live together, so it's a rare opportunity for father-daughter bonding, and Calum has brought a MiniDV camcorder to record their adventures.

Granted, nothing that we would normally consider an "adventure" happens on this vacation. There's sunning, swimming, sightseeing, awkward conversations — and, for Sophie, the chance to get a preview of puberty by closely observing some teenage vacationers.

For the adult Sophie looking back, however, the camcorder footage of this mundane holiday will be an object of troubled fascination, a piece of evidence to study for clues.

Many filmmakers try to mess with our heads on a subliminal level. A few succeed. Aftersun reminded me of my experience with the found-footage horror hit Paranormal Activity: I wasn't scared until after the movie, when I tried to sleep. Somehow I'd been conditioned to be agonizingly attentive to every nocturnal sound, alert for the signs of a demon on the prowl.

There are no supernatural monsters in Aftersun, yet it induces a similar level of attentiveness with a simple device: Periodically, the images we're watching pixelate into fast-forwarded DV footage, and we catch glimpses of a woman's reflection in a TV screen. Though the adult Sophie (Celia Rowlson-Hall) barely appears on-screen until late in the film, she's always present by implication as the person who's combing through the camcorder footage. When that footage gives way to sun-drenched scenes, we assume they are her memories.

Those memories are scripted so naturalistically that they might be documentary footage. Thanks to the superb performances of both lead actors under Wells' direction, we immediately get a sense of Calum and Sophie's relationship: the affectionate teasing and easy physical intimacy, but also the awkward conversational impasses and constant negotiation of boundaries.

Corio gave me flashbacks to young Anna Paquin in The Piano. She doesn't need to telegraph emotions to us in child actor style, because we read them on her face. She has the physical exuberance and imprecise speech of a real kid, tempered by a tween's dawning self-consciousness.

While Sophie is still a little wild, Calum seems trapped. Mescal, who starred in "Normal People," gives him glittering, watchful eyes and cagey body language. Only when Calum is doing tai chi or dancing (in classic goofy dad manner) does he seem to relax.

But what is troubling Calum? What is older Sophie seeking in the vacation footage? Why are the memory scenes framed so idiosyncratically — some intimate, others dreamily distant, others focused on objects rather than actors? We have the unsettling sense that all these banal events are pieces of a puzzle, even if we can't grasp the whole picture.

Some viewers may leave still feeling mystified — and frustrated. Aftersun is no mystery in any traditional sense; the "reveal," if it could be called that, is a blink-and-you-miss-it affair. Don't go looking for answers in interviews with Wells, either; while she acknowledges the film is autobiographical, she hasn't been forthcoming about precisely how.

Other viewers may find the film affecting them with a power they can't fully explain. Aftersun lulled me with its sunlight and its vérité quality, keeping me teetering on the edge of boredom — until, toward the end, a scene came along and cast all the preceding scenes into stark relief. Then, for no reason and all the reasons, the tears flowed. The emotional current that had been coursing beneath the film's surface surged into my consciousness, defying rational analysis. Nothing remotely tragic happens on-screen, yet the film's ending left me wrung out as the credits rolled.

Was I projecting my own feelings and experiences onto a movie that could be called maddeningly vague? Or has Wells found intuitive ways to show us what she chooses not to tell us? For some, Aftersun may simply not land. But those of us who love it will find ourselves in Sophie's situation, unable to dispel its final images from our memory.

Petite Maman (2021; Kanopy, Hulu, rentable): French director Céline Sciamma has a talent for drawing naturalistic performances from child actors. Short but indelible, this film explores the bond between an 8-year-old and her mother as they cope with a common loss.

The Last Days of Chez Nous (1992; Kanopy, rentable): Australian Gillian Armstrong helped pave the way for today's women filmmakers with her raw, intimate art-house dramas. She excelled at depicting familial relationships in movies such as this one and High Tide (1987; not streaming).

The Tale (2018; HBO Max, rentable): Laura Dern plays a middle-aged documentarian whose entire sense of self crumbles as she reassesses her childhood memories in this underrated #MeToo drama from Jennifer Fox.

The original print version of this article was headlined "Af"