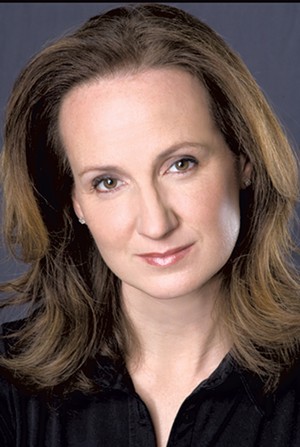 Arts funding in Vermont tends to come in modest amounts, so a $250,000 grant takes everyone by surprise. In this case, among the surprised was recipient Carol Dunne, producing artistic director of Northern Stage in White River Junction since 2013 and a senior lecturer in the theater department at Dartmouth College. Dunne was recently awarded the quarter-mil "genius grant" by the Pussycat Foundation, a New York-based nonprofit established "in the spirit of" Helen Gurley Brown. The prize is given to "individuals who dedicate their lives to transformative work with bold leadership and vision."

If her name doesn't ring a bell, Brown was the longtime editor of Cosmopolitan magazine and author of the 1962 best-seller Sex and the Single Girl. Best known for promoting women's sexual independence, Brown was an ardent advocate for women's issues of all kinds until her death in 2012. Pussycat — her pet name for people she liked — continues that mission with considerable money behind it.

Dunne's grant will be split between Northern Stage and the New London Barn Playhouse in New Hampshire, where she was director from 2008 to 2014. And the good news doesn't stop there. Just this week, Northern Stage announced the establishment of a new program, also funded by the Pussycat Foundation, that will support female artistic directors in professional theaters around the country. Dunne was tapped to lead the BOLD Theater Women's Leadership Circle, which will dispense a collective $1.25 million equally to Northern Stage and four other theaters.

Connecticut-born Dunne, 52, earned degrees at Princeton and the University of Wisconsin-Milwaukee. While in grad school, she says, she realized that "regional theater was my love." She and her husband, Peter Hackett, were at Cleveland Play House before coming east for theater-department positions at Dartmouth. The couple has two children, 13 and 16.

"It's been a thrilling experience, all the opportunities we've had here," Dunne remarks. "We just had our 23rd anniversary and were talking about how fertile this region is for theater. I can't imagine this kind of cohesion — for audience and performers — anywhere else."

We caught up with Dunne on the phone as she hustled from Northern Stage to mom duty.

SEVEN DAYS: First, congratulations are in order for your grant! Did that come out of the blue, or was it something you or the theater applied for?

CAROL DUNNE: It came out of the blue. One of the board members of the [Pussycat] foundation who lives in the area had seen work at the Barn and Northern Stage over the years. They invited [other board members] to come up and see a play [Godspell] I directed at the Barn in July. They took me out to dinner, and we talked. But I thought they were just up here for a retreat. Two days later I found out I'd gotten this grant.

SD: So, with Northern Stage, teaching and directing at Dartmouth and occasionally at the Barn, and having two kids — you are busy!

CD: I am a busy person. But I'm really grateful. All of the work I've been able to do is integrated: Dartmouth is integrated with Northern Stage. Same with the Barn. There's a strong triangle of support. So it's not as onerous as it sounds.

SD: I'm familiar with Helen Gurley Brown and Cosmopolitan magazine, but the Pussycat Foundation was new to me. I looked it up and read that it funds journalism education and libraries, as well as programs that teach girls to code. How does a theater artist figure in?

CD: Well, they've always wanted to have a theater lane. Helen Gurley Brown wanted to empower women. When I talked about my journey with [the foundation], they were excited that I'm a woman artistic director. Only 27 percent of [theater] artistic directors in the U.S. are female — and that includes managing directors. So that's how I fit in. [Pussycat Foundation] is really interested in helping to further women's ambitions, girls' education ... Brown really loved the theater; we're the first to receive [this award].

SD: I read that the $250K is to be split between Northern Stage and the New London Barn Playhouse. Does that mean you don't personally get any of the money?

CD: Correct. And that's absolutely the way it should be. I don't need money to go off on my own and produce work. The theater [companies] need it.

SD: How will Northern Stage use the funding?

CD: We haven't discussed anything so far. My hope is to use it to support what we do. We've never quite broken even yet ... I really want to make these decisions with my staff and board.

SD: You brought musical theater to the curriculum at Dartmouth. Do you lead student productions there, as well as at Northern Stage?

CD: Yes, I created Acting for Musical Theater I and II. ... It's really taken off. We had 60 kids sign up for Cabaret the other day ... I call it the "American Idol" effect, the "Glee" effect — it's created a new excitement for musical theater. It's something I particularly love and have a skill set for, and we're drawing really huge audiences for it. "Glee" makes people eventually see Ibsen. [A Doll's House by Henrik Ibsen is the first show of Northern Stage's 2017-18 season.]

SD: You're directing Only Yesterday at Northern Stage. How much do you generally direct per season? And what about acting?

CD: I keep it to two plays per year, on purpose ... That leaves four plays per year to hire other directors ... I barely get to act anymore. I started out that way, but, with two kids, I don't have the time. I'd love to act more at some point. I have loved being part of the theater. m