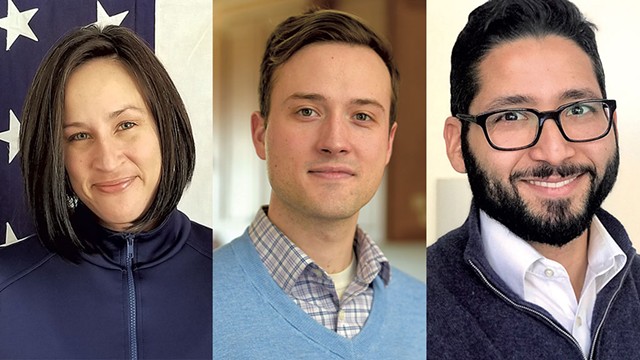 When she had finished, Christianson, a first-time city council candidate, chose his words carefully. He assured Niemiec that the problems she mentioned are "very solvable" and promised to stay in touch.

Christianson's measured response was representative of the campaign he's running in the once reliably Republican North District, also known as the New North End. An independent, Christianson has the backing of the Progressive Party, which sees an opportunity in a wide-open race for the seat vacated by longtime incumbent Dave Hartnett, a Democrat who isn't running for reelection.

After years of electing Burlington's most conservative city councilors, the neighborhood, which boasts the highest voter turnout in the city, is up for grabs. The future of the Queen City could be shaped by which political party takes hold there.

A win for Christianson would solidify a left-leaning voting bloc on the council. But first, the gay, 30-year-old attorney needs to make his case in a district that's never elected a pure Progressive candidate. That means defeating Democrat Franklin Paulino and Ericka Bundy Redic, an independent who describes herself as a libertarian.

Not surprisingly, Christianson hasn't played up the Prog nod as he's knocked on more than 500 doors, held house parties, and hosted fundraising events and voter registration efforts. Instead, the political novice is focused on hyper-local issues and listening to residents "from all walks of life," as he put it.

Perennial issues in the neighborhood include property taxes, transportation safety and the lack of city services. In 2016, residents turned out en masse at neighborhood and city council meetings to debate the merits of new bicycle lanes along North Avenue, the main thoroughfare that cuts through the neighborhood and connects it to downtown Burlington.

The district is primarily residential, characterized by modest single-family homes on quiet side streets. But its demographics are changing. The New North End has increasingly attracted young families looking for affordable housing; it has the lowest median home values of any neighborhood in the city, according to 2016 U.S. Census data.

The number of foreign-born residents increased by 33 percent between 2010 and 2016, to nearly 15 percent of the total population, the census data showed.

Wright is also the Burlington City Council president and represents Ward 4 within the North District. But he said he won't run for reelection in 2020, so another long-held New North End seat will soon be open.

"There's huge potential out there," said Shay Totten, the communications director for political advocacy organization Rights & Democracy. Dieng's election was "a harbinger" of the changes coming to the neighborhood, Totten added: "It's new organizing territory."

Wright, a moderate Republican, has promoted reason and practicality while representing the New North End as a city councilor and state legislator — often simultaneously — since 1995. He easily reaches across the aisle and has spent the last year as city council president trying to encourage civil dialogue during council meetings.

Hartnett, a Blue Dog Dem, prides himself on speaking up for working people and maintains strong relationships with his constituents. On the council, he's outspoken and unpredictable and has alienated his fellow city Dems who want greater consistency and party alignment.

Wright acknowledged that a win for Christianson would "be a major breakthrough" for the Progressive Party. "They have not done well in the New North End, ever," Wright said.

Rights & Democracy has endorsed Christianson, along with Progressive candidates running in three other races across the city. The group has encouraged its members to attend house parties and make phone calls on Christianson's behalf, according to Totten.

Progressive city councilors, including Max Tracy (P-Ward 2) and Dieng, have gone door-to-door with Christianson. "He has a great profile as a young lawyer in the queer community to represent the changing demographic of the New North End and the city," said Dieng, who is also serving as Christianson's campaign treasurer.

The Progressive Party's former city chair, Kelly Mangan, lives in the New North End and said she backs Christianson's campaign because of "his commitment to affordable housing and putting the interests of working people first." Emma Mulvaney-Stanak, former chair of the Vermont Progressive Party, is on his leadership team. She believes the candidate could increase transparency and help "slow down fast-tracked development."

Burlington's 12-member city council currently has three Progs as well as the Progressive-endorsed Sharon Bushor (I-Ward 1) and Dieng. There are five Democrats, one Republican and independent Adam Roof (I-Ward 8), who often votes with the Dems.

Prog Party leaders know that Christianson, who is not challenging an incumbent, might have the best chance of flipping a seat and shifting the council's balance of power. That would allow them to more effectively challenge Democratic Mayor Miro Weinberger's development decisions and prioritize policies to combat climate change and high housing costs.

The North District seat is "an opportunity for us, absolutely," said Josh Wronski, executive director of the Vermont Progressive Party, adding that electing Christianson is a "very high priority."

But it's unclear how closely Christianson would adhere to Progressive gospel. The party has adopted a citywide platform opposing the sale of public assets after Schurz Communications acquired Burlington Telecom in a 2017 deal. The party has also criticized the lack of public input in development of CityPlace Burlington, the redesign of City Hall Park and the basing of the F-35s at Burlington International Airport, among other issues.

Christianson said he supports the proposed redesign of City Hall Park but would have favored an advisory question on the ballot to allow residents to weigh in. He supports dense development and the CityPlace project. He also wants to implement a plastic bag ban, prioritize policies that help mitigate climate change, and incentivize development projects that include low-cost housing and environmentally friendly construction — stances that will please the Progs.

The son of two mechanical engineers who work on nuclear reactors, Christianson moved frequently while growing up in Kansas, Idaho, Connecticut and Washington State. He attended Western Washington University and got his law degree at New York Law School before moving to Vermont in 2014. He and his husband decided to settle in Burlington, in part, because of its progressive politics, including marriage equality.

Christianson was inspired to run for council after attending his neighborhood's weekly summer popsicle gatherings, at which residents would discuss the needs of the city. He said he enjoyed hearing about their permitting problems and other complaints. It's similar to his civil and family law work, advocating for the vulnerable, including survivors of domestic violence.

But Christianson has no experience in elected office and hasn't served on any local commissions or boards.

The same goes for his opponents. "I, like 98 percent of the population, don't know any of the candidates," said Council President Wright, who hasn't yet decided whether to publicly back anyone.

The Democrat-endorsed candidate is Franklin Paulino, who shares some similarities with Christianson. Born in the Dominican Republic, the 36-year-old father of three is a transplant who moved from Miami to Burlington six years ago.

Like Christianson, Paulino is an attorney, prosecuting cases for the Chittenden County State's Attorney's Office — first under T.J. Donovan and now under Sarah George. His work experience, too, lends itself to problem solving and building consensus in city politics, he said. He believes Burlington needs more sober houses and other outreach services for drug users and homeless people.

Paulino's campaign team includes family and friends, but no local party leaders have gotten involved. While fellow Democrats have endorsed him and hosted an event for all of their candidates last week, only Hartnett appears to be actively pushing for him publicly.

Councilor Chip Mason (D-Ward 5) acknowledged the discrepancy between Democratic and Progressive campaign efforts in the New North End and elsewhere. The Progs are "running hard; they're recruiting very good candidates," Mason said, noting they also have lots of volunteers going door-to-door in the cold to get them elected. "It's something I'd love to emulate. We have to ask the question: What are we doing as a Democratic Party" to recruit young, diverse candidates? At the same time, Mason had not gotten heavily involved in electing Paulino — a young, diverse candidate — though he said he'd consider donating to Paulino's campaign.

Burlington Dems are busy defending their seats in the South and East district races.

Paulino is making the most of Hartnett's stamp of approval. The retiring city councilor, who recently accompanied the candidate during an afternoon of door-knocking, told Seven Days: "I think Franklin would do a great job representing the New North End."

When he visited neighbors last week, Paulino quickly mentioned that Hartnett had endorsed him.

At two houses, the pitch worked.

"I support Dave, so I guess I can reaffirm you," said Bruce Venner, a resident of 23 Birchwood Lane for 55 years.

Christianson has been making the rounds, too. He said he's been starting work early — at 6 a.m. — to make time for after-hours campaigning. Last week, he knocked on doors four nights, attended a house party and registered young voters at Burlington High School with South End Progressive candidate Mohamed Jafar.

He's also raised more than $3,300, as of the February 3 filing deadline, compared to Paulino's $1,900. The third candidate, Redic, didn't file a campaign finance report. She said she doesn't have time to press the flesh but hopes to lay the groundwork for a future run.

Whoever wins in the New North End has to have ready response to: "How about fixing the potholes?" as Peter Bolm asked Christianson at one door last week. The candidate had a solution for him, too: something about a new kind of pothole-proof pavement.

Christianson's platform, he said, is "what I hear at the doors."