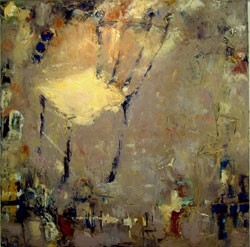 The 78-year-old Northern Vermont Artists Association proclaims in its mission statement that the guild strives “to encourage the study, improve the practice, elevate the standard, and advance the cause of creative art.” Among its founders and early members were many notable New England artists, including Ruth Mould, Elizabeth and Francis Colburn, Emile Gruppe, Georgia Balch and even, for a time, Maxfield Parrish. Contemporary participants include a wide range of painters, sculptors, photographers and printmakers, from established professionals to “Sunday painters.” The association is egalitarian — all members are allowed to show at most NVAA exhibitions. The exception to that rule is the group’s annual juried show in June.

This year’s exhibition is one of the strongest and most diverse in recent memory. Both those qualities are represented in a single painting: Dorothy Martinez’s oil entitled “Blue Chair.” The 36-by-35-inch hybrid merges abstraction and representational art. Yes, there is a chair in the painting, but it is only vaguely discernible among the slashed brushstrokes and bold palette-knife work with which Martinez built layers of beige, gray and small blotches of color around the piece.

Many of the show’s exhibiting artists, like Martinez, seem to understand what’s concrete about abstraction and abstract about realism.

A good example of the latter tendency is Carol Norton’s “Ursula.” The 36-by-36-inch canvas comes from her tornado series of 26 paintings. It presents a low horizon line with a road in one-point perspective running deep into the picture plane and flanked by cornfields. In the sky, a raging blue twister churns amid a broad range of darks and lights.

Fifteen prizes were bestowed on works in this nearly 100-piece exhibition. Norton’s “Ursula” won the Harold Knight Award for oils. Other top honors included Best in Show for Colette Paul’s “On the Lake at Dawn,” the Alden Bryan Award for Alan Morse’s “Pleasant Valley,” and the Mary Bryan Award for Hattie Saville’s “A Voyage Remembered.”

Robert Waldo Brunelle Jr.’s “Scenes From the Life of a House” earned the Kay Petrie Artist’s Choice Award. His gridlike mixed-media assemblage is an amusing piece portraying a Victorian house as it evolves through nine incarnations — from selling new for $1250 in 1889, to a roof fire in 1958, to retooling as a dentist’s office in 2008. Brunelle shows the house in successive pop-up illustrations and tells its story in fancy, 19th-century-inspired script.

The Horace Eldred Award for Photography went to Anne Throop for “Frog Pond Reflection.” The 12-by-18-inch color photo presents a reflection of trees over a silvery pond surface marked with dashes of detritus and ice.

Nancy Stone’s 24-by-30-inch watercolor “Patchwork” won the Ruth Bottomly Award, and it was well deserved. A “crazy-quilt” foreground morphs into a wooded winter field, while a screen of denuded trees runs along the high horizon line.

Among the few sculptures in the show is Longina Smolinski’s untitled pair of 24-inch-tall biomorphic abstractions. The undulating standing forms have wavy, feminine profiles, like figures in long dresses caressed by a gentle breeze. Though they’re fashioned from paper and clay, the smoothness and dark patina of their surfaces imitate bronze. Smolinski’s works received an NVAA Merit Award.

Some of Vermont’s most important artists were on the NVAA’s rolls in its early years, and that is still true today. In that respect the theme of this year’s exhibition, “Voyages in Time,” could describe the organization itself. The NVAA’s 78th annual show logs the ongoing creative voyage of northern Vermont artists.