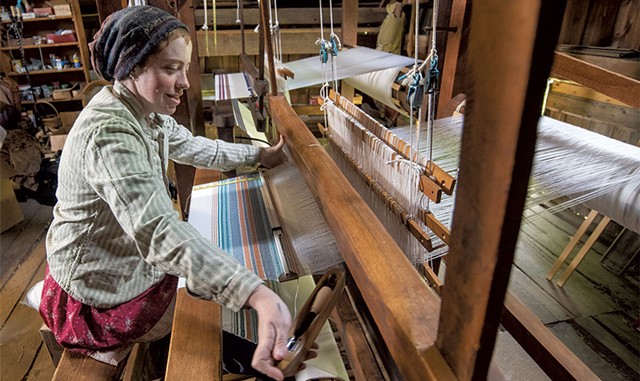 How did a Vermonter who grew up atheist come to weave Jewish prayer shawls sold to customers as far away as San Francisco, Denmark and Australia? The multifaceted answer includes falling in love with an observant Jew, said weaver Nelly Wolf, owner of Black Cat Judaica.

On a recent afternoon, Wolf, 29, chatted with Seven Days in the upper floor of a historic Peacham barn where she works on her two large 18th-century wooden looms. Each held a partially completed prayer shawl bearing stripes of different colors and varied widths woven from blended wool and silk into a white wool background. Bands in shades of ebony, sable and garnet revealed complex detail work forming tiny flowers and stars.

The handwoven fabric will become sacred garments that many Jews wear during worship. They're called tallitot (plural) or tallit (singular) in Hebrew. Each custom order takes Wolf two days to weave and another several hours to finish with hand-sewn corner and neckband pieces and four hand-spun, hand-tied corner fringes.

Since Wolf launched Black Cat Judaica in December 2020, she estimates she's sold about 75 tallitot for between $100 and $700. The sliding scale is based on the size and shape of the shawl, as well as the customer's means. Wolf has spread the word largely via her business Instagram account, generating orders from all over the U.S. and beyond.

Many tallitot are the first special prayer shawls given to youngsters for their bar or bat mitzvah, the traditional Jewish coming-of-age ceremony. Others, such as a pure snow-white tallit with intricate white-on-white twill patterning, are for weddings.

Nelly and Ira Wolf did not wear wedding tallitot at their marriage celebration in October 2021 because it's not the custom in his family's Jewish tradition.

In sharp contrast to Wolf's nonreligious upbringing in Guilford, her husband grew up in a Modern Orthodox family in Manhattan. At 17, Ira left city life for the countryside of Vermont and eventually attended the University of Vermont. He remains deeply connected to Judaism and his community, his wife said, though he no longer follows orthodox practices.

The pair met through folk dancing in 2018. Wolf had studied textile anthropology at Sterling College in Craftsbury Common and was working at the Marshfield School of Weaving.

"I taught Ira how to weave because, you know, we were flirting," Wolf said with a smile. "It was a way to spend time together."

When she asked what he'd like to make, he suggested a prayer shawl. The weaving school had recently hosted a tallitot class with a weaver from a local synagogue. Building from there, Wolf researched and experimented. "There's a lot of tradition, a lot of cultural expectations that people have for a prayer shawl, but there's not actually a lot of halakhah," she said, referring to Jewish religious law.

Among the basic requirements, the garment must have four corners, each anchored with specially tied fringes called tzitzit made from fiber crafted specifically for tallitot. Wolf hoped to meet the requirements while flexing her creativity to offer a wider range of colors and personalization than is customary.

The idea of creating and selling these culturally important garments intrigued Wolf for several reasons. She believes deeply in the value of traditionally crafted items, as well as making them affordable.

For her senior project at Sterling, Wolf made a Scottish arisaid, a historic woven garment also called a "woman's plaid." She did everything by hand: from carding and spinning the wool to growing plants to dye the weaving fibers.

In her final paper, subtitled "How to Weave the Hard Way, and Why You Should Try It Some Time," Wolf acknowledged, "Economically, it makes no sense to make an arisaid." But, she continued, engaging in such labor-intensive handcrafts can help people "gain more diverse perspectives, and consequently more open minds, about the communities, cultures and environments in which they might otherwise not be involved."

Sterling faculty member Carol Dickson said Wolf distinguished herself as a student — and continues to do so — not only for "her skills, passion, and love of weaving and traditional craft but also her level of thoughtfulness. She's learning, and she's teaching us through her weaving. She's maintaining and enhancing cultural traditions."

With Black Cat Judaica, "Nelly found a niche that needed filling," Dickson said. "She has connected to people all over the world."

Wolf's entwined spiritual and professional destiny was seeded long before she met Ira, she recalled. During childhood, she bonded with her family's neighbor and her mother's best friend, Carol Schnabel, a professional weaver who is Jewish. "She was my other mother [and] a mentor in a lot of ways," Wolf said.

Wolf spent a lot of time in Schnabel's weaving studio and remembers clearly when Schnabel visited her first-grade class. "She helped us make these little looms out of Popsicle sticks," Wolf said.

Schnabel also shared her cultural and religious background. "I always say I had this Jewish-adjacent upbringing," Wolf said with a chuckle. "I always wanted to know why different people thought different things," she recalled. "I would have little metaphysical conversations with Carol, like, 'Am I a bad person for doing this bad thing?' And she said, 'No, everybody does bad things. You just have to then make up for it.'"

When Wolf met her future husband, it became evident how much Jewish philosophy she had absorbed. "We bonded over this way of looking at the world," Wolf said. By the time the couple married, she had converted to Judaism.

Black Cat Judaica's sliding-price scale and flexible payment plans exemplify that worldview. Encouraging people to pay what they can afford, Wolf explained, is a form of tzedakah, a pillar of Judaism. The word is sometimes translated as "charity," but she interprets it as justice or reciprocity, even mutual aid. Wolf believes everyone, not just those with money, deserves access to beautiful, handmade tallitot.

"It is part of the larger goal of making a better world," she said. "You don't do it because you're nice. You do it because it's right."

Her husband is a paraeducator in the St. Johnsbury school system. The couple lives in a yurt in Barnet and is gradually renovating the 1840s-era house on the property. This month Wolf will move her looms into the first finished room, enabling her to weave year-round. She has been weaving in the unheated Peacham barn from roughly late April through November.

Black Cat Judaica customer D'vorah Grenn is a spiritual leader, teacher and founding director of the San Francisco-based Lilith Institute, a center for feminist spirituality. She discovered Wolf's work via Instagram and ordered a tallit katan, a poncho-like form of prayer shawl. Grenn had previously bought tallitot from Israel, where many are made, and was excited to support a woman-owned business in the U.S., she wrote by email.

"Folks weaving these garments on their own looms in this country is, I believe, a rarity," Grenn wrote. "Nelly worked with me on my personal preferences while holding to her own practice with integrity — all of which gives the garment more meaning."

The flexible pricing was also important to Grenn. She said she has been investing heavily in her own business, though she did ultimately pay more than she had budgeted.

"I saw Nelly's devotion to this sacred work and I wanted to honor that," Grenn wrote. "It's all too rare in an automated Amazon economy."