North Hero House to Be Sold to New Owners

Doug Nedde and Heidi Tappan confirmed that they have reached an agreement with Walt Blasberg, owner of the North Hero House and its two associated restaurants, to purchase the property on November 1 for an undisclosed amount.

The 26-room inn and restaurants will continue to run as normal through the end of October, at which point Nedde and Tappan will close the property to undertake renovations and improvements.

Blasberg has owned the inn property since 1997. “It’s time for me to retire. I turn 74 this year,” he said in a phone interview.

The married couple splits their time between Colchester and North Hero, where Tappan’s family has deep roots on both sides. “My grandmother grew up in North Hero on a farm, and the farm is still in the family,” Tappan said. “[She] went to a one-room schoolhouse on a horse sleigh with a bear blanket.”

Nedde and Tappan said they were prompted to investigate buying the North Hero House upon receiving an email Blasberg sent out in the spring announcing that this would be the inn and restaurants’ final season. In the missive, he wrote that he planned to close the property for good in the fall to start converting it into a single family home and lakeside condominiums.

Blasberg had the property on the market during the pandemic before delisting it earlier this year. Regarding the few interested buyers who had approached him, Blasberg said, he was concerned that none had the necessary funds to maintain the property. He decided to move forward with his condominium project, which would have had a price tag of about $5 million.

“We didn’t want that to happen to the island,” Tappan said. “I really do feel [that] the community in the village, in particular, would have forever been changed. Not only does the North Hero House have the history, it’s been a place of community over many generations … You can't ever get something like that back.” 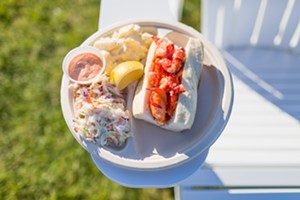 Blasberg knew Nedde and Tappan as regular restaurant customers but never imagined they’d be interested in buying the property until they approached him. “They have the motivation and the capital,” he said. “They’re dream investors.”

The couple said they do not necessarily intend to be hands-on owners but will do what it takes to keep the business going while seeking partners interested in managing day-to-day operations.

“Their motivation is to preserve the North Hero House as an asset for the community,” Blasberg said. “It makes everybody happy.”

Well, not quite everybody, he allowed — “not the eight people who put deposits down on condos.”