On Saturday morning, 97 injera lay stacked on a counter in the O'Brien Community Center kitchen in Winooski. Mulu Tewelde had spent about five hours on Friday making the traditional flatbreads for her sold-out Eritrean/Ethiopian takeout dinner.

To make enough for the 110 meals, many ordered with extra injera, "we need to make about 40 more," she said.

In Tewelde's native Eritrea and neighboring Ethiopia, pieces of the soft, tangy, crêpe-like injera are used to scoop up mouthfuls of food. "We don't use forks. We use injera as our utensil," Tewelde said.

Making injera is time-consuming and can be a little unpredictable. Tewelde uses a sourdough starter to ferment the batter, which is made from teff, barley and wheat flours. (She also makes a gluten-free version.) "Sometimes it turns out well; sometimes it doesn't turn out well," she said. This batch was successful, but "it can make me frustrated," Tewelde admitted with a smile.

Tewelde's cooking is a staple of the multicultural dinner series organized by North End Studios, an arm of the nonprofit Vermont Performing Arts League, which offers cultural and arts events and provides affordable rental spaces to organizations, artists and others.

"The food is connecting people." Mulu Tewelde tweet this

The dinners began as occasional offerings at North End Studios' Burlington location. When the nonprofit expanded to Winooski in 2019, Tewelde was the first to do an on-site dinner there.

After a pandemic pause, the dinners started up again as takeout meals in May and are now a weekly Saturday event.

The menus span the globe and represent culinary traditions in the greater Burlington community that are not commonly found at local restaurants. The meals so far have cost $20 per person.

Recent dinners have featured Somali, Bosnian and Arab cuisine; upcoming ones will have Jamaican, Greek, Filipino and Abenaki menus. Most of the cooks are not full-time food professionals, but they are serious about sharing their cultures through food.

Tewelde came to Vermont in 2006 and lives with her family in South Burlington. In addition to her job at the Champlain Senior Center, she runs a small catering company whose business slowed almost to nothing due to the pandemic.

The dinners have allowed her to keep cooking for the community. "I love cooking and sharing food," Tewelde said. "It gives us the opportunity to introduce our food and our culture. The food is connecting people."

On Saturday, Tewelde had help in the kitchen from Haydee Miranda and Helen Koester. The two young women peeled potatoes and chopped red onions while Tewelde minced ginger and jalapeños to stir by generous spoonfuls into five pots across two stoves for spicy potatoes, lentils and collard greens.

The sauces were tinted deep crimson from berbere, the signature Eritrean and Ethiopian spice blend that contains chiles, coriander, garlic, ginger, black cardamom and fenugreek. Tewelde orders it in 60-pound bags from a woman in Minnesota.

Chicken curry and a beet, carrot and potato salad for vegetarians rounded out the meal. Tewelde had brought a little beef to cover a flurry of last-minute customers she hadn't had the heart to turn down. "It's hard to say no," she said. "I appreciate them so much. I wouldn't be here without them."

Many of the cooks became involved through past participation in the Vermont International Festival, another project of the Vermont Performing Arts League.

The 28th annual festival will take place December 4 through 6 solely online, except for an abundance of takeout food. Over the weekend, people will be able to order three dinners — African, Argentinian and Filipino — as well as a global appetizer sampler ranging from momos to samosas. Sweet options will include a Middle Eastern dessert platter, Austrian apple strudel and pints of gelato.

Faiza Haider of Essex, who came to Vermont from the United Arab Emirates in 2001, will make the dessert platter with the help of friends. In 2019, Haider collaborated with friends she'd met through the local Arab community and mosque to set up a food booth at the Vermont International Festival.

"We get together and say, 'You are good at that thing; you are good at this thing. We can do this!'" Haider said. "The three of us, we love cooking. We laugh. We have fun. We like to have [the] money, too."

When Mediha Goretic cooked her Bosnian meal for the October 10 dinner slot, she had help from her 22-year-old daughter. Goretic was just a couple of years older than her daughter is now when she left Bosnia and came to the U.S. as a refugee in 2000.

She treasures memories of gathering with friends and family for leisurely meals under grape arbors. Food, Goretic said, "is in your blood. It's your cultural identity." It matters to her that her two children understand where they came from: "The food is connection for them to family." 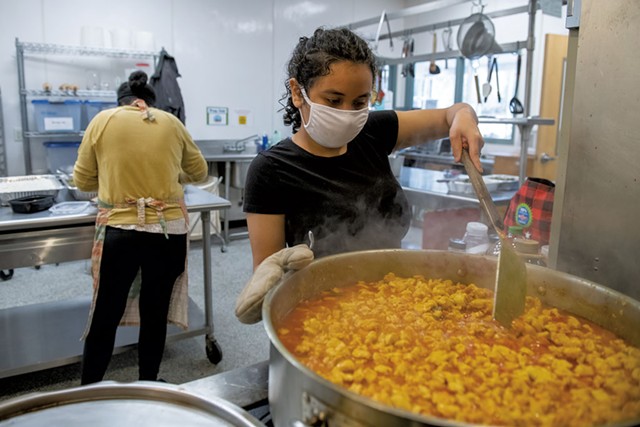 Goretic was excited to find Bosnian peppers from a local farm for her sataraš, a sautéed mix of peppers and onions. She even made the phyllo dough from scratch for her beef-and-onion burek pastries and apple-walnut baklava.

The dinner marked the first time Goretic had cooked for such a crowd, though she recalled watching her mother pull together meals for 30 with ease. Her daughter, she noted, "was so proud of me." Although Goretic has a full-time job, she is using the dinner series as a stepping-stone to launch her own catering operation, Meza.

The chef for Saturday's Halloween menu will be Bilon "Richie" Bailey, owner of the food truck Jamaican Supreme. He launched the truck in 2015, two years after he moved to Vermont, and is gearing up to run it through the winter.

A friend connected Bailey with the North End Studios dinner series opportunity. "I'm always for the multicultural type of thing," he said, noting that Jamaican food comes with multicultural "built in," courtesy of influences ranging from Indian curries to Spanish marinating techniques. "It started everywhere in the world," he said, "and we put it together our way."

Bailey will serve a jerk chicken using his grandfather's rub recipe, featuring ginger, scallions, Scotch bonnet peppers and many spices. Vegetarian options will include callaloo made with chickpeas and sturdy greens washed in saltwater and stewed with lots of onions, garlic, carrots and bell peppers and a little coconut. Both will come with Bailey's signature fried plantains and coconut rice.

The dinner roster continues to diversify. "A couple of days ago, somebody walked into the office and said, 'I want to cook one of these dinners,'" Shohet of North End Studios said. "They were Iraqi."

She believes the variety helps keep customers coming back. About half of them buy tickets every single week.

Deb Ellis and John Mech of Burlington have ordered the dinner more than six times. Like many people over the past few months, they've been cooking more and not going out to eat.

The couple said they miss the socializing part of eating out as much as the food. Besides giving them a break from the kitchen, the North End Studios dinners have added a fun dimension to virtual gatherings. On Saturday nights, they order meals for themselves and Ellis' parents and sister. When Ellis picks them up, she appreciates the chance to connect briefly with the cook of the week. Then the three households commune with each other — plus family around the country — over the same interesting meal.

Tom Avenia of Colchester, another regular, said he likes the dinner series because it is "food that I normally wouldn't make myself, a special kind of thing you can't get everywhere."

Plus, Avenia continued, "I like the fact that I'm supporting these entrepreneurs, many who are immigrants. I look forward to it every week."

The original print version of this article was headlined "Global Tastes"