Norse Course: A Viking exhibit in Montreal suggests America was "discovered" a long time before Columbus 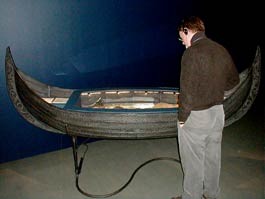 Mathematician John Nash reckoned, “You need just one good idea.” The subject of A Beautiful Mind suggested that exposing people to one original notion can change the way they look at the world. That’s exactly what happened when I dragged my spouse and a friend to the Vikings exhibit at the McCord Museum in Montréal last weekend.

What would you expect at a Vikings exhibit? Helmets with horns, perhaps? Petrified wooden boats? Iron Age tools? That’s what I anticipated. What we saw, however — in addition to cool Iron Age tools — was some old information put together in a brand-new way.

Helge Istad had his own single good idea. The Swedish adventurer took a look at the ancient Norse legends and decided that maybe the tales were instructions on how to reach the farthest outpost of Viking explorations. He built a boat and followed the trail. At the point in the saga when the Vikings finally reached Vinland, the modern Swede rowed his own boat ashore and asked the locals if anyone knew about old ruins, any signs of long-abandoned settlements nearby.

“Sure,” said George Decker, a resident of Anse aux Meadows, on the northern tip of Newfoundland. He led Istad to what proved to be the Vikings’ Vinland settlement. This revelation, and subsequent excavations, displaced pages and pages of history about Columbus that had been hundreds of years in the making. Decker apparently told Istad, with classic Newfie understatement, that lots of locals knew about the ancient ruins, but no one had asked about them before.

An equally amazing new idea occurred to Dr. Robert McGhee, Curator of Arctic Archaeology at the Canadian Museum of Civilization. Having spent his career preserving and interpreting hundreds of thousands of archeological artifacts from the far reaches of the Great North, McGhee knew that even the Norse weren’t the first descendents of the Eastern Hemisphere to reach North America.

The first people came to Newfound-land from the West — the other side of this continent — and before that over the land bridge from Siberia to the Alaskan peninsula, and before that from Asia and Africa. The human journey east from Africa by way of Asia finally hooked up with the human journey west from Africa by way of Europe. At L’Anse aux Meadows, McGhee said, the Vikings completed global human migration in 1000 A.D.

This amazing new way of looking at old facts is the theme of “Full Circle: First Contact — Vikings and Skraelings in Newfoundland and Labrador,” which runs through April 2 at the McCord Museum. It’s a beautiful exhibit, inspiring and chock-full of things to think about. Did you know, for example, that the west coasts of continents are warmer than the east coasts? As a result, farming replaced hunting and gathering much farther north in Europe than is possible in eastern North America. This allowed the Nordic population to grow, prosper and accumulate surplus wealth.

Not everyone had to scratch for subsistence, as did the Skraelings of Labrador. Not everyone had to hunt or fish. Some could build boats and develop other special skills, or design tools to solve new problems. One display case, for example, features artifacts from both Sweden and Labrador, dated 900 A.D. From Sweden the curators have assembled fine jewelry crafted from silver, intricately carved rune stones, iron boat nails and bone harpoon tips. From Labrador, they offer arrowheads chipped from chert and some tiny soapstone carvings of animals.

There’s also a piece of Viking graffiti. A rune carved into a smooth gray stone and placed at the base of a cairn in far northern Greenland is translated thus: “Erling, Bjorn and Enride were here on the Saturday before Rogation Day.”

While the audio guide is not required to appreciate this exceptionally well-organized exhibit, I strongly recommend it. Unlike audio guides for art exhibits, which typically pick out a dozen or so paintings for in-depth review, listening to the Viking exhibit is like sitting in on a brilliant lecture by a first-class historian, ethnographer or archaeologist. Another piece of the story unfolds in each room: human migration, the North Americans, how the Viking settlement came to be, what it represented and why it was abandoned.

The museum offers plenty of places to sit and listen, while maps, murals and world globes trace the journey. At the end of each audio segment, you can switch off the tape player and explore the clever display cases, mounted inside of miniature Viking ships.

The middle of the exhibit includes a huge photomural of the excavated Anse aux Meadows settlement. Lush sod roofs cover the long houses, which sit on a slight rise overlooking a gorgeous bay. This was the southernmost reach of the Vikings’ trans-Atlantic economy. It was abandoned because of the difficult climate, and because such a remote outpost was impossible to defend from relentless attacks by resident Dorset peoples, ancestors of the Innu, Mi’kmaq and other northern tribes.

At the end of the exhibit is a picture of the “modern” town of Anse, with its tumble-down dock, a pile of rotting fishnets, scattered plywood houses and leaning telephone poles. The recent collapse of the cod fishery in the Grand Banks has made life even harder there. The locals are a resilient and resourceful people, though, attached to the rocks of Newfoundland like barnacles. And after all, these descendents can’t just pack up and go back home…