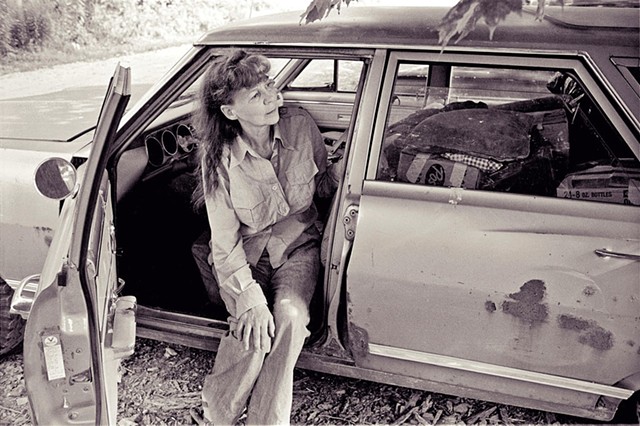 Norwich-based filmmaker Nora Jacobson first met Ruth Stone in 2009. Vermont poet Chard deNiord was working on a collection of interviews with elders of the form. He hired Jacobson to document his meeting with Stone, the poet laureate of Vermont at the time, and to help facilitate the interview. Stone was in her mid-nineties, and macular degeneration had deprived her of the ability to read. Still, surrounded by her three adult granddaughters, Stone could recite some of her poems from memory.

Footage from that interview appears early in Jacobson's new documentary, Ruth Stone's Vast Library of the Female Mind. As Stone recites "Metamorphosis," originally published in 1971, her granddaughters chime in for the poem's opening stanza. Jacobson pans the camera across the room to capture the four women speaking in unison, but, as the younger voices drop out, she zooms in on Stone. The poet's failing eyes peer into the distance as she continues in soliloquy:

I see more now than then; but she who had my eyes

Closed them in happiness, and wrapped the dark

In her arms and stole my life away,

Singing in dreams of what was sure to come.

Speaking with Seven Days earlier this month, Jacobson recalled the day fondly: "I interviewed her, and I just fell in love."

That first meeting was the genesis of Jacobson's documentary. Twelve years in the making, Ruth Stone's Vast Library of the Female Mind premiered last month at the Vermont International Film Festival in Burlington to a standing ovation.

On Saturday, November 20, the film will screen at the Briggs Opera House in White River Junction, presented by White River Indie Films and CATV.

Stone died in 2011, two years after that interview with deNiord. Her body is buried in Goshen, behind the house she bought in 1958 and where she spent much of her life. There, she raised her three daughters when she wasn't ping-ponging across the country from one university to another for short-term teaching residencies.

Stone's home is a fixture in her poetry. The birds that populate its wooded hillsides visit her verses often, and the structure itself is a source of both pleasure and adversity. In "Plumbing," published in 1995, the narrator observes a young man stumbling through the attic over the tucked-away detritus of a long and varied life, including "sleeping bags, the Beatles posters" and "bed springs" in order to "wire up the hot water tank." In gratitude, the narrator muses,

And you admire him

as you would Saint Francis,

for his simple acceptance

of how things are.

Stone's toilet, that retainer of miracles, appears in the film — an emblem of how her work is able to find the sublime even in the quotidian. Standing over it, her grandson-in-law, Ben Pease, tells the story of how Stone gave the poem to the plumber as a gift. The toilet still resides in the house, fully functional.

Given Stone's passing in 2011, Jacobson had limited footage for her film, she said: only the couple of interviews that Stone did with deNiord. Jacobson supplemented those with archival footage from the Poetry Center at Passaic County Community College in New Jersey and from Sidney Wolinsky, a former student of Stone's who had made a short film about her called "The Excuse" in 1973.

But the arc of the film did not become clear to Jacobson until 2016, when Bianca Stone, one of Ruth's granddaughters and a poet and visual artist in her own right, decided to renovate the Goshen home and turn it into a writer's retreat. The nonprofit Ruth Stone House now offers classes, workshops, readings, publications and a letterpress.

The house is both an entry point for understanding Stone's poetry and "the spine of the film," Jacobson said. In the film, Bianca leads the camera through Stone's former home, room by room, before its renovation. From the once-inhabited spaces, the film catapults into interviews with friends and colleagues, archival footage, and even animation provided by Bianca.

During the tour, Bianca finds fragments of poems littered about, evidence of Stone's creative impulse constantly at work. In one instance, Bianca picks an old Post-it Note out of a box of books, and there the beginnings of a poem await. She reads, "Again rejected all night by my dead husband / He's so indifferent." Below a few more lines of poetry is a cousin's phone number.

The "dead husband" of the fragment will be familiar to anyone who has read Stone's writing. Walter Stone, her husband and a promising poet and novelist, committed suicide in 1959. Walter appears in her poetry again and again, not as an apparition, but as an indelible absence — the fact of his death affixed to her as a defining feature of her life and work.

"Walter becomes her muse," said Jacobson. "She wrote about him until the end of her life."

Stone's identification as a widow is an essential aspect of her poetry, but she was able to transform that loss into something unafraid and life-affirming.

"To me," Jacobson said, "her life embodies the alchemical process of turning tragedy into art."

Jacobson's film effectively locates different threads in Stone's life to help the audience better access her poetry, but Jacobson tries not to be too presumptuous with her interpretations. She explained, "I want people to create their own images of her poetry in their minds when they hear her words or read her work."

The purpose of the film, Jacobson said, is to share Stone's life and work with a greater audience — and to share the wonders of poetry itself.

"Poetry is this amazing art form," Jacobson added, "because it's so economical that people can sort of carry a poem with them throughout the day, and it can console them. It can comfort them."

Ruth Stone's Vast Library of the Female Mind, directed by Nora Jacobson, screens on Saturday, November 20, 4 p.m., at the Briggs Opera House in White River Junction. A discussion with Jacobson follows the film and will be livestreamed and broadcast by CATV. Tickets and info at wrif.org.

The original print version of this article was headlined "Homegrown Verse"