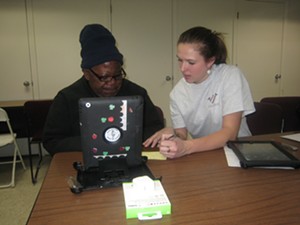 When South Burlington High School started using an online grading system, former student Carly Stine remembers that the transition wasn’t easy for her parents. Instead of just getting Carly's grades through the mail, they had to get used to looking them up online. Today, Stine, 23, is a program manager at Technology 4 Tomorrow (T4T), a non-profit that runs technology training workshops across Vermont.

This week, Stine ran a 90-minute iPad training course for graduates of Parent University — a two-month program started by the Burlington School District last spring to equip parents with the skills and knowledge to become partners in their children’s education and development. Though PU isn’t created specifically for New American or English Language Learner parents, many of them participate in the program because they are new to the school district and its culture, said Ali Dieng, Parent University's program manager. Parents who complete one cycle are allowed to sign up for another to encourage continued learning and self-improvement.

In the meantime, when the Burlington School District donated 23 used iPads to Parent University and its graduates in January, Dieng reached out to T4T to request training for parents in between Parent University sessions. This way, the PU participants and Stine will have the opportunity to get to know each other before the new session starts, Dieng reasoned.

The participants in this week's iPad training classes came from Angola, Burma, Burundi, China, Guinea and Senegal. There were interpreters on-site, including French-speaking Dieng, to help those who aren’t proficient in English. Participants learned how to set up an iCloud account and access the Burlington School District's website.

One parent from Angola, Mambweni Makumba, was so engaged by the class that he promised to attend the next session of Parent University. He had come to the training in place of his wife, Rosa, who had to work.

Another parent, Paw Wah, from Burma, already has a desktop computer and iPad of her own, but her children often use them to play math games. The mother of three wants to use her newly acquired iPad to check her emails, call her parents in Burma on messaging app Viber and fill out her work time sheets. The AmeriCorps member, 36, isn’t sure if she’ll be able to attend the next cycle of Parent University because she’s taking multiple English classes with Vermont Adult Learning.

Though Stine had hoped to help participants download apps and understand internet safety, there wasn’t enough time to do so. Some of the participants had to rush off for work or other classes.

“I want to do it again,” Stine said, adding that she hopes to build on what the parents had learned when Parent University reopens in April.