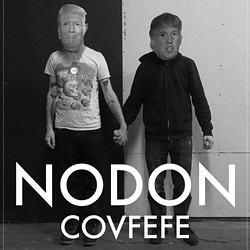 Good punk thrives on bad politics. In 1980, the election of Ronald Reagan awakened a whole generation and made careers for the likes of the Dead Kennedys, among others. Decades later, the invasion of Iraq gave new purpose to groups such as NOFX and Rise Against. So it makes sense that 2017 would be fertile ground for protest rock.

Burlington punk duo NODON were formed in the aftermath of ... well, you already know. President Donald Trump's term has been a long one already. Pour yourself a drink.

NODON consists of Tristan Baribeau on vocals and guitar, backed by drummer Seth Gundersen. Both are full-time members of the BTV rock group Villanelles. Covfefe EP is their second release. The first, President Fuckboi EP, came out mere weeks after the election. They haven't lost any momentum since.

Covfefe is urgent, caustic stuff, committed to Baribeau's "raise some money, raise some hell" mission statement. This time, the duo is even more focused, delivering all original material for its second effort.

The EP's title is a reference to the social-media echo chamber that deranges our national conversation. "Covfefe" is a typo Trump made on Twitter just two weeks ago; now it is an obligatory cultural phenomenon — and the title of a punk album. Republicans have been a reliable source of media gaffes since the salad days of Dan Quayle, but Trump is a whole other animal. Simply keeping up with his latest mistakes is exhausting.

NODON's message is more catharsis than critique. This is punk music, after all. On Blue Heart Attack, the last Villanelles album, Baribeau's songwriting was subtle and careful. NODON songs are more like a caps-lock Facebook rant — but, mercifully, far shorter.

"Alt-wrong, but you think you're right / You racist, sexist, homophobic troglodyte!" as Baribeau hollers on the second cut, "Alt-Wrong," is about as sophisticated as things get. Which is fitting for our current clown world climate. I don't mean to imply that Baribeau has to exert himself in order to mock Trump and his cult of personality.

Unlike their early punk forebears, NODON bring some serious chops into the studio. Baribeau's riffs are flashy and complex, his vocals are in key even when he's just shouting. The production is punchy and full, which goes a long way toward glossing over the fact that this is just guitar, vocals and drums.

While Covfefe EP isn't for everyone, the potential audience is still pretty huge. Though there's nothing catchy enough to constitute an earworm here, it's melodic and engaging material. And the primal scream that NODON pours into every track is shared by millions around the world, every day. It may be preaching to the choir, but there's a lot of demand for that sermon right now.

So give Covfefe EP a spin. The project is pay-what-you-want, and the group donates most of its proceeds to local charities. Until impeachment gets under way, catharsis may be the only consolation we get.

Covfefe EP by NODON is available at nodon.bandcamp.com.