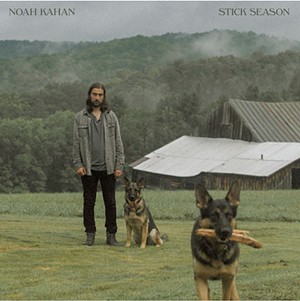 It's ironic how our closest relationships, such as those with our parents, siblings and partners, are the ones that inspire both our harshest criticism and our fiercest loyalty. The same is true of hometowns. I complain about mine, but at the first hint of derision from others I leap to its defense. When I'm home, I am restless, and when I'm far from home, I long to return.

Noah Kahan's latest record, Stick Season, highlights this essential love-hate relationship. He wrote it during the pandemic from his mom's house in Strafford, where the musician spent his early years. His unflinching lyrics pick apart myths and fairy tales about small-town Vermont and the people who live there, including and especially himself in the album's most yellable line — "I'm mean because I grew up in New England" — from the song "Homesick."

While city slickers might view the Vermont countryside as an idyllic escape, Kahan paints it as quicksand in "Homesick." "I got dreams, but I can't make myself believe them / spend the rest of my life with what could have been / and I will die in the house that I grew up in / I'm homesick," he sings. By the time he repeats that last word, the listener understands that Kahan is twisting the standard definition: He's sick of being at home.

But that dissatisfaction is balanced with other emotions, most potently nostalgia, on this album. "All My Love" and "Strawberry Wine" reminisce on loves lost; "Still" captures the difficulty of goodbyes; "Orange Juice" welcomes the return of a newly sober loved one. The album's pop-folk sound feels suited for a casual gathering of close friends who've piled their Blundstones at the door.

The most popular song, the one that catapulted the album to debut at No. 14 on the Billboard charts and Kahan to sell out shows at Higher Ground and nearly every other venue on his U.S. tour, is the title track, "Stick Season." With chords simple enough for a novice guitar player (read: me), it was begging to be covered, and the singer-songwriters of TikTok complied, with Kahan enthusiastically replying to and reposting their interpretations.

But the album's paradoxes are best captured on the final track, "The View Between Villages," which describes Kahan driving a familiar rural road and experiencing wild emotional swings. One moment "It's just me and the curve of the valley / And there is meaning on Earth, I am happy." Then the instrumentation intensifies as Kahan's car rolls into town and he's reminded of all the versions of his past that he lived there. Tension rises: "It's all washin' over me, I'm angry again," he sings. Kahan retreats back onto the road, seeking the peace he had felt. It's a love song, if a brutally honest one. For some, "home" will always be a loaded word.

Stick Season is available on all major streaming services.