No Tiff on TIF — Kiss, Community Leaders Say It's a Win-Win for Downtown Burlington 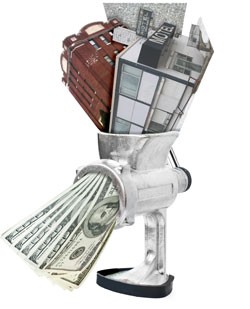 When developer Melinda Moulton and her business partner, Lisa Steele, started their work in the early 1980s, the Burlington waterfront was, as Moulton put it, “an oasis of neglect:” abandoned buildings, barbed wire, rusting fuel tanks and a filthy electric plant that would soon be mothballed. Access to the lake was “limited at best,” and no parents would let their kids play down there.

None of that private development would have occurred, Moulton insisted, were it not for the creation of a tax increment financing (TIF) district to redevelop Burlington’s waterfront. A unique financial tool, the TIF enabled the city to clean up the area and build such major public improvements as the bike path, boathouse, fishing pier and sewage treatment plant.

On Friday, Moulton was one of several community and business leaders who joined Mayor Bob Kiss to encourage Burlingtonians to vote “yes” on the creation of a new TIF for downtown. This one would allow the city to borrow up to $10 million for public infrastructure improvements, encouraging private investments in areas where they wouldn’t otherwise occur.

Kiss, who is not running for reelection, held his press conference against the backdrop of one of the biggest eyesores in downtown: the crumbling parking lot adjacent to the now-defunct Midtown Motel, best known for its sexual trysts, drug deals and brief stays for people down on their luck.

For years, city officials and developers have talked about redeveloping this so-called “super block,” often characterized as the gateway into downtown. But private investors have been wary of building there, in large part because of the massive investment needed to clean up the site and add public amenities such as new parking, water and sewer lines, and public transportation infrastructure.

“It’s time, really, to stop talking … and actually do them,” said Tom Torti, president of the Lake Champlain Regional Chamber of Commerce. “Let’s put our money where our values are and start moving forward with this project.”

A TIF allows a municipality to borrow money on the promise of future tax revenues. For a limited time, the state forgoes its share of the property taxes collected on new developments in the TIF district — retail shops, office spaces, condominiums, etc. — so the city can use the money to pay down the debt incurred from building those improvements. Once it’s paid off, property taxes are split between the city’s general fund and the state’s education fund.

As a financing tool, the TIF enables large-scale investment in future development.

Kiss noted that a “yes” vote on ballot item 5 doesn’t incur any debt for the city, nor does it raise anyone’s taxes. The TIF simply allows the city to participate in the financial program — its last chance for the foreseeable future, unless the legislature changes the law. Any potential projects would still have to be vetted by the Vermont Economic Progress Council and approved by Burlington voters and/or their city council.

Are TIFs controversial? Sometimes. In January, State Auditor Tom Salmon announced that an audit had revealed problems with a Milton TIF created back in 1998. Salmon determined that its administration was “flawed,” which resulted in a back tax bill of $3 million. It’s unclear whether Milton will have to pay the money back.

City Council President Bill Keogh noted there was “some difference” of opinion between city council and the mayor on the timing of the proposed Burlington TIF; some thought it would be prudent to wait for the results of an audit currently under way on the city’s last TIF. Nevertheless, Keogh said he knows of no councilors who oppose this TIF, nor any organized opposition from residents. Keogh has also asked Salmon for an expedited ruling on the pending audit; the results are unlikely to arrive before next week’s election.

Nearly everyone who spoke at the press conference emphasized that the TIF would enable the city to grow its tax base and avoid driving development into Vermont’s countryside.

Yves Bradley, a commercial real estate agent who also serves on the Burlington Planning Commission, noted that the TIF is a nonpartisan issue that encourages smart growth. He said the system in place makes it much easier to build on undeveloped land than to take an urban “embarrassment” like the Midtown Motel and say, “‘OK, what are we going to do with this?’”

Charlie Giannoni, a low-income Burlington resident and member of Ward 2 and 3 neighborhood planning assemblies, said he “strongly supports” this vote as a way to encourage more affordable housing downtown. As he put it, “I’d rather see these development dollars used for this purpose than coming out of the regular pot of money from taxpayers.”

If voters shoot down the TIF next Tuesday, it won’t be as a result of any organized opposition, but because of one of two reasons: either they don’t understand how it works, or they assume that anything that pairs Mayor Kiss and “debt” is a bad idea.

This article has been corrected. Main Street Landing has contributed about $8 million in property taxes and other city revenues total. It does not contribute $8 million annually.