No Showers on Vacation, 'Aquaband' 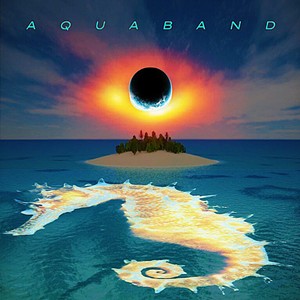 For better or worse, Burlington is known as a beacon for freewheeling, fractal music best classified as "jam." And even though the University of Vermont group No Showers on Vacation pledged allegiance to Phish in a recent email to this publication, their debut album, Aquaband, seems to play by its own rules rather than try to fit some kind of mold.

No Showers on Vacation, with its ridiculously debauched moniker, are relatively new on the local scene. They warmed up with last year's Bath Time: Miami EP, a title that almost contradicts the band's name. It was a dry run, so to speak, for Aquaband, a much grander and tighter cosmic escape.

For me, bad lyrics can tank a jam band — and that seems to happen a lot. It probably has something to do with the genre's emphasis on feeling over thinking. But No Showers on Vacation eschew lyrics entirely on the new outing, sticking with sprawling instrumentals. Not to cast aspersions on the group's lyrical chops, but the two worded tracks on Bath Time: Miami knocked the six-song EP off its axis a bit.

Aquaband is much more focused. The congas and Latin-tinged piano at the outset of opener "Chestnut" signal a predilection for jazz, which turns out to be a major foundational element for the group. (The same could be said about much of their phorefathers' music.) The record is streaked with hints of other stylistic ingredients found in a typical jam stew, namely '70s and '80s funk. Clavinet and other organ sounds appear frequently amid squealing guitars and heavy percussion.

The record is increasingly compelling as it unfolds. Early cuts such as "Space Trash" and "Powdered Milk" play it fairly safe, not rising above low-key grooves. But the record is back-loaded with some fairly staggering work, such as the rollicking "Theme Song." With a sense of easygoing confidence, guitarist Emmett Lurssen and keyboardist Alden Nichols layer scalloped riffs over breezy, swinging beats from drummer Sam Lyons.

"Amtrakk," the penultimate song, puts saxophonist Pat Maley up front. The horn player opens the cut with an urgent melody over Nichols' delirious piano. It drops into half time with Mellotron flutes descending in fluttering waves. The song continues to ramp up its intensity, with Nichols blasting through stuttering, syncopated chords.

Despite its chintzy MIDI horns, "Gold" closes the record with a smash. The song rides a rising tide of electric guitar into a wall of snarling sound.

No Showers on Vacation distinguish themselves with an ear for precision. Yes, they get wild, but they temper their sense of abandon with a clear sense of theory.

Aquaband is available to stream on Spotify.

Speaking of No Showers On Vacation, Aquaband