No Return: Loss of a Redemption Center Complicates 'Canner' Lives

Not long after daybreak on October 11, an elderly Bhutanese woman wearing a black hoodie and rubber gloves walked briskly along Lafountain Street, pulling a dolly-like cart. The temperature hovered just above freezing, and the streets of Burlington's Old North End were nearly deserted. She paused at a curbside blue recycling bin, rummaged through its contents, tossed two tall-boy beer cans into her cart and headed down the street to the next bin.

The woman, who declined to give her name, is one of a loose brigade of "canners" who make a living or supplement their income by gleaning redeemable bottles and cans. Her bottle-collecting rounds used to bring her to the Old North End's only redemption center, where she exchanged her haul for cash — until last month, when the Burlington Beverage Center & Bottle Redemption closed after 38 years in operation.

Neighbors likely won't miss the cacophony of clanking bottles or the stale-beer aroma. But for people who make their living one five-cent can at a time, the closing was akin to losing the only bank within walking distance — the one that cashed their paychecks.

How are canners coping? Through a translator, the Bhutanese woman explained that she has downgraded to a smaller cart and her children now drive her to the next-closest redemption center, two and a half miles away in Winooski.

She knows two people who stopped collecting "because they didn't have a car."

Vermont is one of 10 states with a "bottle bill" that requires customers to pay a deposit on bottles and cans containing carbonated and malt beverages, to cut down on littering. The law led to the creation of redemption centers, where people could return their empties — for cash. In 1978, five years after the bottle bill was enacted, Richard and Georgette Hammond opened theirs on a triangle of land where North Union Street meets North Winooski Avenue.

Burlington made recycling mandatory in 1992 and rolled out a citywide pickup program the following year. Residents began using curbside bins, and many, for convenience's sake, throw in redeemable containers as well, making it easy for people to collect discarded cans. They traverse the streets in the evening or shortly after dawn in advance of the city's recycling trucks, rifling through bins, often while toting gravity-defying loads. Redeemed liquor bottles are worth 15 cents; carbonated beverage containers fetch five.

Centrally located in one of the state's most diverse neighborhoods, Burlington Beverage Center & Bottle Redemption attracted plenty of business. After the Hammonds paid collectors, they'd sell the material back to the manufacturer or a third-party processor. A 2007 survey commissioned by the state Agency of Natural Resources found that redemption centers processed a range of 9,000 to 875,000 containers per month. The revenue they received from returning the material to the manufacturer or a third party ranged from $300 to $30,000 per month.

When Robin Hammond took over for Richard and Georgette in 1998, his wife, Jessica, recalled, people used to stand in line for hours to turn in their cans for cash. Their ranks included longtime Vermonters and New Americans, teens and elderly people.

Seven Days spoke to five city canners for this story, mostly older women with limited English. All were reluctant to give their names, either because they didn't want to embarrass their families or feared being taxed on the income.

One Burlington resident said he's been collecting for 40 years. He does it to supplement his income, but he said others rely on the money to survive.

Jessica said that closing the business has been "bittersweet," but after more than 30 years, they were ready for a change. Robin has already found a full-time trucking job.

Redstone, a real estate and development company, is buying the property and doesn't plan to resurrect the redemption center. "Our goal is to repurpose the existing building," said managing partner Erik Hoekstra. "It's a building that I've always kind of admired." He's looking for commercial tenants; a local architect has expressed interest in opening an office there, he said. 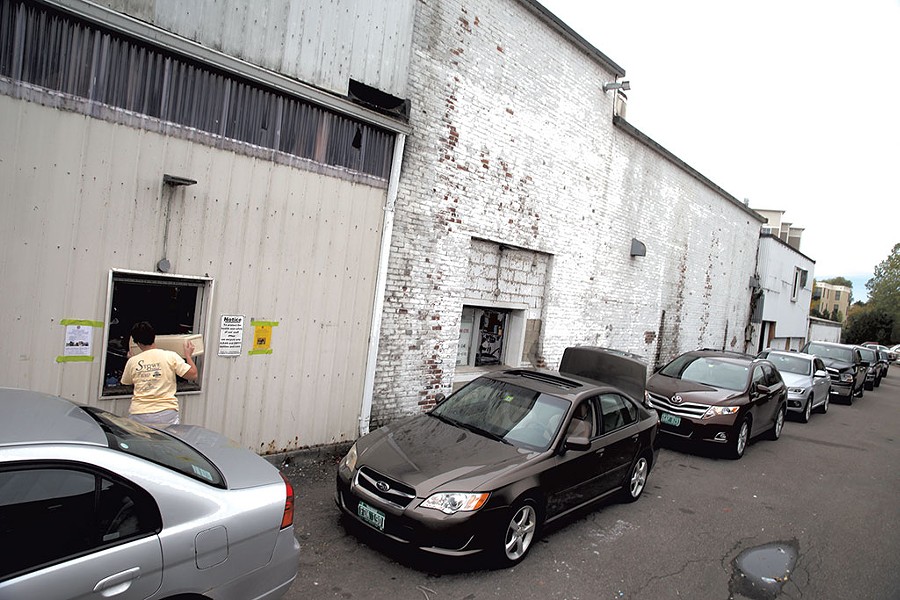 That won't help another Bhutanese woman — this one in a blue knit hat — on nearby Intervale Avenue. On a recent Tuesday, her shopping cart was overflowing, with extra garbage bags slung over the cart. Since the Hammonds' place closed, her son has been driving her load to Winooski's Beverage Warehouse, which has a redemption center out back. A few streets away, another New American canner wearing a conical straw hat said she also relies on her son to drive her bottle bounty to the Onion City.

Not everyone has car-owning kin. A white woman in her sixties said she now pays someone $5 — the equivalent of 100 bottles — to drive her load from Johnson Street to a New North End redemption center. She uses the extra cash to buy diapers and food for her grandchildren. "Right now, we're collecting for Christmas," she added. She said she knows several other people who stopped looking for cans after the redemption center on North Winooski Avenue closed.

A Lilliputian woman wearing a green jacket and a headscarf explained in broken English that she now walks to Winooski — a 4.5-mile round-trip from where she stood on Archibald Street.

The lines are getting longer, and "we have a lot more walkers," confirmed Derrick Guilmette, who mans the customer window at the drive-through redemption center behind Beverage Warehouse. Inside, two men wearing earmuffs and protective eyewear grabbed cans off an enormous wooden lazy Susan and tossed them into bins, organized by material. Guilmette noted that one New American man has been coming with a $60 load — several times a day.

Options are limited for canners who can't get out of downtown Burlington. Pearl Street Beverage accepts only $3 worth of containers at a time. Most grocery stores have reverse vending machines that process cans and bottles, but there aren't any in the Old North End.

A little more than two miles away, the New North End has two redemption centers, one on either side of North Avenue. Employees at Beverages R Us, located in the Ethan Allen Shopping Center, and Spring Discount Beverage, directly across the street, report modest increases in customers, some of whom are walking from the Old North End.

One of them will likely be "Birdman," the Jamaican native known in Burlington for pushing an elaborately adorned shopping cart. He's been "recycling," as he calls it, for about 20 years, and he's proud of his bottle-picking prowess: "I know the tactics and skills to get bottles," said Birdman.

But whether it's to Winooski or North Burlington, his next trip to redeem them will be a long haul. "I don't have no choice. I have to do it," he said. Ideally, he could minimize his trips by waiting until he'd amassed a large collection of cans, but there's no room for them inside his jam-packed apartment. If he leaves them outside, they get stolen, he said.

"It's terrible," said Birdman, but he's more worried about the plight of other canners. "I'm thinking of the other people who don't have the strength and health," he said, noting that some are elderly and disabled.

Wanda Hines is also concerned that canners who can't make the trek could lose their livelihood. Hines is the director of the Joint Urban Ministry Project, a low-income advocacy organization that owes its existence to a $10,000 bequest made by a longtime Queen City can collector named Nathan Johnson.

"For people who are economically oppressed, one of the biggest challenges is transportation," Hines said. For those traveling to redemption centers without cars, "what routinely would amount to several blocks will now be three to five miles round-trip by foot." Winter will make the trips more arduous, she added.

And a more existential threat looms for both canners and redemption centers. As Robin Hammond put it, "They've been trying to do away with the bottle bill ever since they started it." Members of the beverage industry have never been big fans, and changes in recycling practices have bolstered the case that it's too costly.

The state has made recycling mandatory and adopted a "single stream" system so that all materials can be sent to a single processing location. Critics say maintaining a parallel system for bottles and cans is redundant. Environmental groups such as the Vermont Public Interest Research Group defend the bottle bill, pointing out that roughly twice as many redeemable bottles and cans get returned as materials that are simply recyclable.

Canners don't feature prominently in this debate, but if the bottle bill is abolished, they would be collateral damage.

"We wouldn't have our income," said the grandmother collecting for Christmas presents. And, she added, "This place would be a dump."