Wooden Dinosaur settle down in Vermont 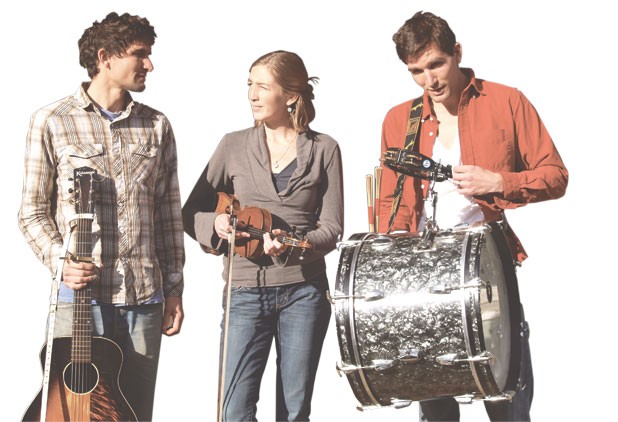 Katie Trautz is sitting at a small table at the Langdon Street Café in Montpelier and explaining some of the unusual inspirations and techniques Wooden Dinosaur are exploring in preparation for recording their next album. Michael Roberts, her longtime friend and cofounder of the eclectic local ensemble, sits across from her. Warm strains of Feist’s The Reminder emanate from the café’s speakers. “There are a lot of diverse influences in our music,” Trautz, 28, is saying.

Indeed. Indie folk is the easiest point of reference for Wooden Dinosaur’s 2010 debut, Nearly Lost Stars. But it’s not an adequate descriptor. That album boasts an array of stylistic touchstones, from rock and psychedelia to folk, old time and country. Every song rebuffs a strict definition.

“When we explore country and folk music, all of the other music we listen to is never really far from mind,” contributes Roberts, also 28 and the band’s primary songwriter. He raves about a recent local performance by Kurt Vile and reveals an affinity for Argentine songwriter Juana Molina. As a child, Roberts’ father introduced him to folk and country icons such as Hank Williams and Bob Dylan. He recalls listening to Pavement, Nirvana and Dinosaur Jr. as a teenager.

“I’ve been listening to a lot of Bob Wills lately,” Roberts says, referring to the late western-swing bandleader. “It’s been inspirational. His band had, like, three fiddle players, a bunch of horns, electric guitars…”

“And yodeling,” echoes Roberts. “It doesn’t seem like it should work. But it does.”

Though few would ever confuse Wooden Dinosaur with a western-swing band, the correlation is a good one. A sextet when at full strength, Wooden Dinosaur employ a unique assortment of guitars, strings, horns and organs to accent Roberts’ esoteric songwriting.

“[Wills’ band] works because it’s this weird orchestra, working together to come up with the right arrangements,” Roberts continues. “That’s sort of my goal: to explore all these different types of music, but make it work because we’re doing [them] together.”

Trautz and Roberts have been playing together since meeting during their first week at Bates College in 2000, even though Roberts admits they didn’t have a lot in common at first. Back then, Trautz primarily played the steel pan (for Wooden Dinosaur, she’s a vocalist and fiddler), while Roberts focused on jazz and classical guitar.

Trautz is a folkie at heart. The Cabot native began learning the fiddle in high school, continued through college and has studied with a number of local fiddlers since. She also performs in the local folk duo Mayfly. Trautz has no classical training, but is a driving force behind Montpelier’s Summit School of Traditional Music and Culture, a community-oriented folk-music academy.

To find common ground with Trautz, Roberts delved deeply into American folk music. But first, he made a slight detour … to Mongolia.

“I just wanted to get really far away from the Northeast,” the New England native says of his postcollege travels. He also wanted to distance himself from music in general for a while. Despite that intention, Roberts soon became immersed in Mongolia’s rich folk heritage.

“Just being around folk musicians in Mongolia and seeing how they approach their own music and musicianship made me look into American music more deeply,” he says.

Michael Roberts’ journeys provided a fundamental theme for the record. “A lot of it is about traveling … feelings of alienation,” he says. “Never really knowing what home is.”

While his songs reflect personal experiences, much of the alienation expressed is rooted in a more profound dichotomy that Roberts observed while in Inner Mongolia. Similar to Tibet, he explains, the region was once independent and has since been colonized by the Han Chinese.

“That’s a really crazy place,” he says. “There is a lot of tension. So, a lot of that alienation comes from friends living in a place that is supposed to be their home, but it’s not anymore.”

At the time, Roberts was also dealing with fallout from an ill-fated, long-distance relationship. “There are some classic breakup songs, too,” he points out.

It’s difficult to divine literal meanings in the songs on Nearly Lost Stars. Roberts’ lyrics are often mysterious even to Trautz, who sings lead on several tracks. “Often, I don’t really know what I’m singing about,” she admits. “I internalize and interpret them in my own way.” Trautz says she was previously unaware of the Mongolia connection, “but I understand the alienation.”

Roberts says his lyrical vagueness is intentional. “[If taken literally], I can’t imagine anyone would understand, or that it would connect with anybody,” he says.

Trautz points to a new song, “The Haunted.” “It has to do with being haunted, in my mind, by love,” she says. “The lyrics are so ambiguous, and there’s so much feeling in them. But I’m not quite sure what the specific theme is. But that allows me to feel the song, even if I’m not really interpreting it as originally written.”

Wooden Dinosaur will begin recording a follow-up record this summer. Trautz notes that Roberts’ new material is more focused, which is perhaps a result of the songwriter’s newfound stability. His wanderlust sated, he’s now settled in Brattleboro and is engaged.

“There’s less of a longing,” Trautz observes. “It’s more about love, home and what’s going on in the world.”

“I take more of a stance, which is a little scary,” Roberts adds, referring to the social and political undercurrents in his new songs. “It’s easy to be ambiguous. But putting yourself out there is kind of frightening.”

That may be true. But, as Trautz notes, there is strength in stability. And they can always count on yodeling.