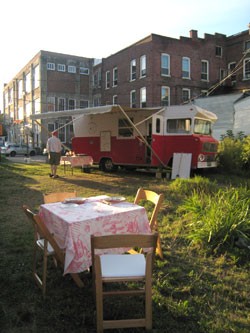 The funky diner-on-wheels is the most recent endeavor of Terry Raphael Murphy, the former general manager of Rustico’s in Essex and a career chef and restaurant consultant.

Murphy found the retired truck for sale in Barton a few months ago and decided to retrofit it as a “guerrilla bistro” with a stove, oven, fridge, grill and Fryolater.

He then spent a few months trying — without success — to land a permit to park the vehicle on Montpelier streets. Finally, he leased the vacant Main Street lot next to Charlie O’s, owned by Jeff Jacobs’ property-management company.

Nonno’s menu is a mashup of antipasto-type specialties and snack-bar fare — bruschetta on Red Hen Bakery bread, fresh-cut potato chips with gorgonzola dip and Vermont cheddar toasties are some of the offerings. Murphy uses as much local produce as he can get his hands on, such as the Maplebrook Farm mozzarella, which appears in both his caprese sandwich (with local tomatoes) and Sienna slippers (cheese wrapped with prosciutto).

“When the cold weather approaches, I’ll do some really fun stuff,” adds Murphy, including soups, mussels steamed in Vermont microbrews, and bacon-wrapped scallops in a bourbon-maple glaze.

For now, Nonno’s (which means “grandfather’s” in Italian) is open Wednesday through Monday for lunch and dinner, at least until the snow arrives. “At night, I light it up with Tiki torches,” says Murphy.