No Escape: Furloughed Inmates Get Jailed Again and Again 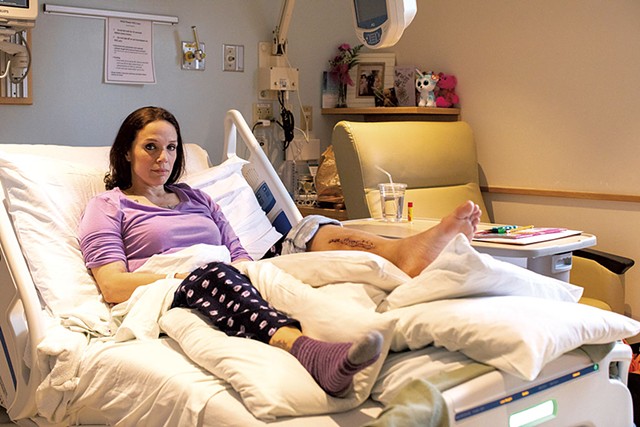 Eleven days after Jennifer Caplin walked out of the Chittenden Regional Correctional Facility, she was transported by ambulance to the University of Vermont Medical Center with a life-threatening blood infection.

The 40-year-old Montpelier native had been part of a small wave of inmates released from the women's prison last month in the aftermath of a Seven Days investigation into alleged abuses at the facility. But like many of those who leave Vermont's prison system, Caplin remained under Department of Corrections supervision and had to comply with the restrictive rules of the state's unique furlough program. Lawmakers are considering an overhaul of the system, arguing that it has failed to help ex-inmates like Caplin break free of Corrections.

As she regained consciousness after emergency surgery on the morning of January 2, Caplin was greeted in the post-op recovery room by a pair of unexpected guests: two probation officers. They told her that the GPS tracking bracelet she was required to wear on her ankle had indicated that she was at the hospital.

Caplin had also just undergone a heart exam, so her gown was partially removed and her chest was exposed. She was still groggy from anesthesia. But the men, she said, insisted on learning what had landed her in the hospital.

"I think they were taking advantage of me in a weak situation," Caplin said. "Using their authority, waving around their flag, like they do."

That night, after Caplin returned to her hospital room, another pair of probation officers showed up and asked her to sign a medical release so that Corrections officials could access her records.

"I was hesitant," said Caplin, who was receiving intravenous medication and said she had not fully regained her faculties. "[One officer] got frustrated and was like, 'Just sign the form, Caplin.' So I ended up signing it." UVM Medical Center spokesperson Annie Mackin declined to comment on the situation, citing patient confidentiality.

Kira Krier, Caplin's clinical social worker, said she believes the Corrections officers were trying to determine whether Caplin, who has struggled with addiction, had violated the terms of her furlough by using drugs. In Krier's view, the way they went about it was entirely inappropriate.

"Someone who is incapacitated cannot consent. We have talked about that as a nation," said Krier, who has worked in the women's prison for years. "The fact that someone of power came into her room as she was incapacitated and asked her to sign her rights away is a basic violation of her human rights. End of story."

Interim Corrections Commissioner Jim Baker declined to comment directly on Caplin's case, but he argued that his probation officers have a responsibility to keep tabs on those they are charged with supervising.

Baker also defended the department's practice of seeking medical releases, calling them essential to understand why a supervisee with a history of drug use might end up in a hospital. But, he added, it's "fair" to ask whether such a person properly consented to such a request.

"Was the person in the right state of mind to sign the waiver? That's a legitimate question," Baker said. "Asking for the waiver is not unusual."

"I expect major changes to the furlough system. It doesn't appear to be working." Sen. Dick Sears tweet this

The officers visited Caplin even as state policy makers were preparing to debate radical changes to Vermont's byzantine system for supervising ex-inmates, which includes a confusing array of statuses. Some legislators and advocates for criminal justice reform are hoping to eliminate furlough altogether, arguing that it has failed to ease the transition from prison to society. In fact, they say, it often serves to trap people like Caplin in a never-ending cycle of revocation and recidivism.

"I expect major changes to the furlough system," said Sen. Dick Sears (D-Bennington), the powerful chair of the Senate Judiciary Committee. "It doesn't appear to be working."

In most prison systems, furlough refers to a temporary break from incarceration, often for those seeking medical treatment or attending a funeral. Vermont's version is far more expansive: At Corrections' discretion, those who have served their minimum sentence, or close to it, can be released into the community before they are granted parole. "Furlough status means that a person is technically still in jail and serving their sentence in the community," Baker explained.

But critics of the system — sometimes referred to as FSU, because it's administered by the department's Field Services Unit — say it requires too much from the recently released and only sets them up to fail. Those on furlough are typically subject to a curfew that could keep them confined at home for 12 hours a day. They often have to rely on limited public transit systems to attend a battery of meetings with parole officers as well as addiction, mental health and employment counselors — all while holding down a job, maintaining approved housing and, in some cases, spending supervised time with their children. Those on furlough also have fewer due process rights than their counterparts on parole, so a minor slipup can quickly land them back in prison. 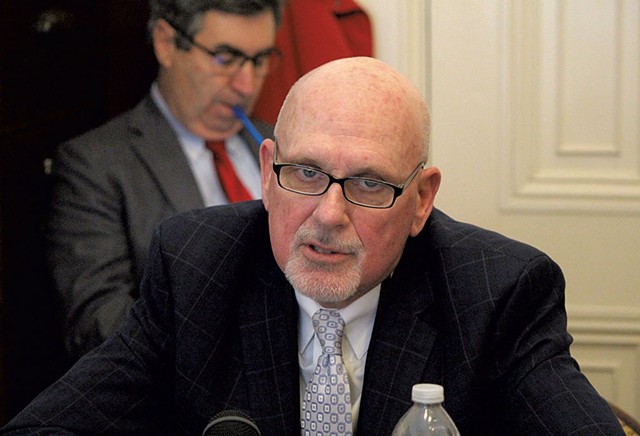 "It makes for an almost impossible system to navigate successfully," said Ashley Messier, a former Chittenden Regional inmate who now serves as Vermont organizer for the National Council for Incarcerated and Formerly Incarcerated Women and Girls. "People in the system refer to FSU as 'fucking set-up.'"

New data collected by a nonpartisan research group bolster the case that Vermont's furlough system isn't working as intended. According to the Council of State Governments' Justice Center, 53 percent of admissions to Vermont prisons in the past three years were the result of furlough violations. Another 25 percent came after probation or parole violations, while only 20 percent constituted new court commitments.

Of those returned to prison for furlough violations during a nine-month period last year, 77 percent committed what's known as a "technical violation" — such as losing a job or housing or using drugs or alcohol — and only 22 percent committed new crimes. According to the Justice Center, Vermont has the highest revocation rate in the country.

For the past six months, the Justice Center has been working with Vermont policy makers and advocates at the request of the legislature and Gov. Phil Scott to collect the data and use it to inform state prison reforms. According to deputy program director Ellen Whelan-Wuest, the Justice Center expects to issue recommendations to its working group of Vermont officials next week. Those will be folded into legislation as soon as possible, Sears said.

The Justice Center has done similar work throughout the country and, in 2007, teamed up with Vermont policy makers for the Justice Reinvestment project. The organization says the resulting changes, including better screening for behavioral health challenges and greater access to substance abuse treatment, reduced the state's prison population and saved money.

Participants in the latest effort, dubbed "Justice Reinvestment II," say its recommendations could include replacing furlough with presumptive parole, a system that automatically releases inmates when they reach their minimum sentence unless there's a reason to keep them confined. The organization may also seek more money for programs to help ex-inmates stay out of trouble. DOC has been level-funded for five years.

"We invest in private prisons out of state. We don't invest in transitional housing in-state," said James Lyall, executive director of the American Civil Liberties Union of Vermont and a participant in Justice Reinvestment II. "That is fundamentally immoral. It leads to bad policies that lead to bad outcomes."

Even Baker is alarmed by the Justice Center's data. "The numbers speak for themselves," he said, adding, "Corrections is very open to changes."

In the meantime, Caplin is doing what she can to avoid returning to Chittenden Regional. If history is any guide, it won't be easy.

Caplin was first sentenced to prison in 2006 for a second DUI, unlawful mischief and other violations, she said. Since 2013, when she was charged with aggravated assault and her fourth DUI, she's been returned to the facility more than 20 times, she estimates, typically for drinking, using drugs or violating curfew.

On December 4, Seven Days published its Chittenden Regional investigation, which quoted Caplin alleging that a corrections officer had twice attempted to buy cocaine from her while she was out on supervision. The story prompted other guards to verbally harass her for speaking to the newspaper, Caplin said.

In the weeks that followed publication, Chittenden County State's Attorney Sarah George secured the release of five inmates from the women's prison. Messier, meanwhile, sought the release of Caplin, who was eligible for furlough but had not been able to obtain housing.

On the afternoon of December 19, Caplin and another Seven Days source, Penny Powers, suddenly learned that they would be leaving prison — early the next morning.

"There was no release plan. We didn't know what we were doing, where we were going. We didn't have food lined up," Caplin said. "We left the facility with the clothes we came in with. Neither one of us were prepared for winter."

Messier, Krier and other advocates sought to provide what the state had not, pooling personal resources to buy the women clothes and other essential supplies. They ended up in what Krier described as "a shady fucking hotel that is gross" and which was far from the services they required to maintain their furlough status.

"There wasn't a whole lot going on day to day because we got out just before Christmas," Caplin said. "A lot of things were closed around the holidays."

Soon, she started experiencing the symptoms of what turned out to be a major blood infection: Her foot started hurting, and then her ankle began to throb. Caplin said she was not sure what caused it, though such conditions can be connected to drug use. "It was just very quickly getting really bad," she said.

On December 30, Caplin called an ambulance to take her to the hospital, she said, but she was quickly dismissed. "As soon as I got home, it blew up a lot bigger," she said. "It was swelling extremely bad. It was pulsating, hot and red."

The next day, Caplin called another ambulance. Doctors told her she was in septic shock and had blood clots in her lungs. In the coming days she would require three surgeries. "I think I was the last person of the decade to have surgery," Caplin said during an interview from her hospital bed. "I got that award out of this."

George, the Chittenden County prosecutor, said she realizes that the women she's managed to release from the women's prison will face serious challenges on the outside — but she believes it's worth the risk.

"I still think, in most cases, they are better in the community than they are in jail," George said. "Jail is not the answer."

Correction, January 18: An earlier version of this story misstated the nature of  Caplin's criminal history.