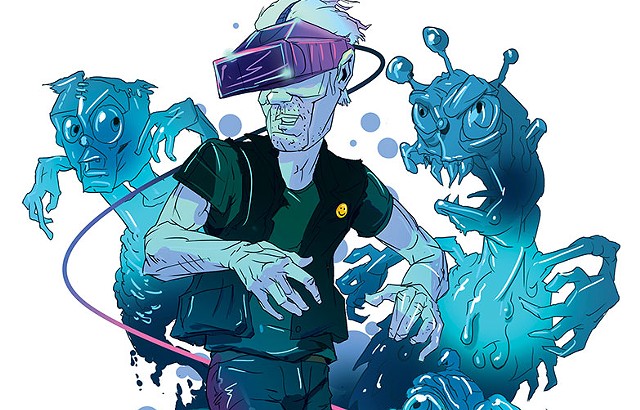 I am a ninja. The blades of my twin katana are a steely, shimmering blur of elegant death. I slice through my adversaries with blinding speed and precision, turning each into little more than pulp as they fly toward me. There goes a pineapple. Whoosh! A few oranges. Whoosh-whoosh! A watermelon. Splat! And finally, a kiwi — at least I think it was a kiwi.

I am a fruit ninja, vanquisher of kiwi.

"Dude, that was almost a record!"

That's Jake Blend, a gaming enthusiast and technician who works as the "pinball wizard" at Burlington bar-arcade the Archives. Presently, he and Kip Steele are introducing a handful of local kids and one thirtysomething journalist to virtual reality through a VR version of the popular mobile game Fruit Ninja. Blend pats me on the back and calls me a "natural" as I remove the HTC Vive goggles — I missed his high score by a mere five points.

I'm pulled from the bright, ancient Japanese dojo where I was just dicing flying strawberries like a Ninja Turtle on a fruit-smoothie diet to the dim environs of the Generator, the cavernous maker space in the basement of Burlington's Memorial Auditorium. It takes a minute for my eyes, and mind, to adjust.

"Pretty cool, right?" says Steele. Still in a bit of a daze, I nod in hazy agreement.

Steele is tall and stands with the posture and alertness of a former Marine, which he is. There is also a pleasantly soft dad-ness about him. Steele, who works as the IT quality assurance and testing program manager at UVM Health Network, is a father of three. Or four, if you count the supercharged gaming computer he built himself to run the Vive and its voluminous suite of games and software. On several occasions during the 90-minute Generator session, he refers to the machine as his "fourth child." It's unclear whether he's joking.

What is clear is Steele's passion for virtual reality and his excitement for the possibilities the technology holds. He is the founder of Vital VR, a startup creative studio that's working to develop a variety of VR technology for use in hospitals. As such, Steele is part of a small but growing community of VR enthusiasts and developers in the Burlington area. Collectively they aim to expand the emerging technology across a wide array of interests and industries — from health care to defense to hacking up flying fruit in feudal Japan.

Virtual reality has been a staple of science fiction for decades. But in real life, the technology is still in its infancy.

"We're at the really early stages of the innovation process," Steele explains. "We liken it to the battle between VHS and Betamax."

In his estimation, the HTC Vive would be VHS and competing VR hardware such as the Oculus Rift would be Betamax. He suggests that the winning format will strike a balance between performance and cost. Much like VCRs in the early 1980s, VR hardware is almost prohibitively expensive. The Vive retails for $800, Oculus Rift for $600. And that doesn't include the powerful (read: pricey) computer required to run VR software. Smartphone VR sets such as Google Cardboard and Samsung's Gear VR are exponentially less expensive options, but they're also technologically limited by comparison.

VCRs profoundly changed home entertainment. Virtual reality has the potential to be just as transformative, if not more so. You need only to slip on a headset to understand why.

Even in a game as simple and silly as Fruit Ninja, VR is a revelatory experience. To don VR goggles is to step into another world. It's a computerized world, sure. But it's an alternate reality just the same. Imagine if you could physically exist inside a video game; that, instead of interacting with a flat, two-dimensional screen, you could immerse yourself in the game completely. You're not playing Fruit Ninja. You are the ninja. That's the essence of virtual reality.

In Fruit Ninja, a series of fruits are lofted into your field of vision. The goal is to slice through as many as you can within an allotted time. You can step forward and backward and from side to side, just as you would if you were, for some reason, to attack the produce department at your local market with swords. And your field of vision is, well, anywhere you choose to look — up, down and all around.

Movement in virtual reality is natural and intuitive — if somewhat deceptive. As I carve my way through fruit after flying fruit, I imagine I'm something close to Uma Thurman's sword-wielding assassin Black Mamba in Kill Bill. And I'm working up a bit of a sweat — it turns out VR can offer a decent cardio workout. I feel smooth and agile, even powerful. But then I see the video Steele has shot of me playing the game.

Unlike the expert swordsman I feel like in the game, the video reveals a jackass flailing around like a drunk. Such is the power of VR: It can transform an uncoordinated journalist into a ninja. Or a space warrior.

The other game we play is called Space Pirate Trainer.* It's essentially a glorified version of the classic arcade game Space Invaders. Aliens appear in the sky, and it's up to you to shoot them down. It's addictive and even more immersive than Fruit Ninja.

While gaming is the sexy draw for VR, the real-world applications of the technology are staggering. For example, using VR, Steele envisions allowing doctors to practice surgeries without the use of cadavers, and other potentially game-changing advances.

"In health care we talk about the 'golden hour,'" he explains, referring to the first hour of critical care that can make the difference between life and death. "What if, using VR and robots, you were able to start that care in the ambulance before the patient even gets to the hospital? This is a gateway."

Ben Throop is the owner and founder of Frame Interactive, a Burlington-based game-design company. His game, Headmaster, was a launch title for Sony's venture into virtual reality, PlayStation VR, which debuted on October 13. Before moving to Vermont, Throop was a game director at an Activision studio in Albany, N.Y., called Vicarious Visions. He says the potential for virtual reality is nearly incomprehensible.

"You can convey experience in a way that wasn't possible before," he explains. "There is no sense of where the front and back are. VR changes the relationship to the thing you're consuming.

Throop reiterates that VR's immersive quality can have implications far beyond the gaming world.

"It's almost too big a question to ask what the possibilities are," he says. "What would you do if you could be virtually anywhere?"

*Correction, October 20, 2016: An earlier version of this story misidentified the other virtual reality game played that day. It was Space Pirate Trainer.