Nightmare Vermont Gets Even Darker 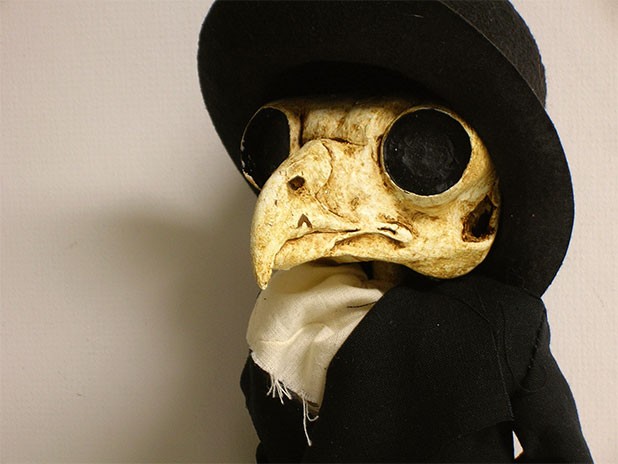 The term “dark arts” may conjure images of cloaked sorcerers casting devious spells, but for Deidre Healy, it’s a great prompt for a gallery exhibit. Healy, former executive director of Vermont State Craft Center at Frog Hollow, is the curator of the Dark Art Gallery, a new exhibit attached to the Nightmare Vermont haunted house in South Burlington.

But don’t think the gallery will be full of cheesy vampire and zombie schlock. This is not a Halloween show, Healy insists. She put out a call to artists, both local and regional, to bring in pieces that could be considered “dark,” however the artist interpreted that. The solicitation brought in 18 works, from a bird-skull doll by Burlington artist Beth Robinson to a site-specific installation by Chris Harvey, a multimedia artist from Troy, N.Y.

While the interactive Nightmare Vermont has been spooking people since 2004, the art gallery is a new addition. Jana Beagley, the director of the haunted house, wanted a fresh element for it and looked to Healy for help. The art gallery concept just seemed to make sense, Healy says.

Rather than turn to familiar Vermont creators, Healy wanted to mine the talents of those who have been quietly making art here without much recognition. They may live and work in the area, but they don’t exhibit here, Healy suggests. To reach such artists, she put up fliers in tattoo studios, comic-book shops and coffee houses, plus she Twittered about the gallery. That effort yielded a good cross-section of artists from around the region.

Healy and Beagley were a little worried that soliciting “dark art” would result in exclusively sci-fi or blood-and-gore-themed submissions. But that didn’t happen. “There’s a sense of everything from the whimsical to pieces that are really dark,” Healy says. “Artists took a lot of liberties.”

Located at the entrance to the Nightmare Vermont show, the gallery has free admission, which is good since some of the haunted-house shows have sold out. Healy guarantees the art won’t be as scary as the show is, but she says not to expect “shiny, happy art.”

Want to get spooked?