Night Spires, 'Whispers From the Grave' 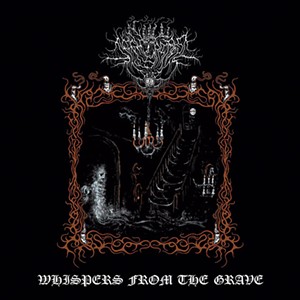 One of these days, I'll finish writing my magnum opus, Confessions of a Child Metalhead. An account of what it's like having older brothers take you to metal shows when you're a tyke, the memoir features everything from being kicked out of the pit at an Anthrax show for being too small to making a homemade video for Metallica's "Harvester of Sorrow." (I proudly flipped off the camera and was subsequently grounded. So metal.)

One of the weirder chapters in that book would definitely be the time I saw the Norwegian band Immortal and first experienced black metal. The shrieking vocals, the punishing riffs interspersed with atmospheric arrangements, those blast-beat drums and the palpable sense of evil permeating the music all left quite an impression — as did seeing a band covered in corpse paint, surrounded by satanic imagery.

Still, black metal never quite won me over. For a teenage wannabe guitar hero, the absence of solos was hard to get past, as was the lack of vocal melodies. Now, many years later, Burlington's Night Spires force me to reevaluate my stance on the genre with their sophomore effort, Whispers From the Grave.

Right from the start, the EP establishes a vibe of impending doom. Opener "Between the Fog" begins with a highly processed voice singing a wordless dirge, like a funeral procession straight out of Mordor. Then the pummeling starts, as walls of distorted guitars and double-bass-heavy drums explode across the mix.

"Between the fog there is nothing / Just the songs of sorrow," vocalist and front person Ovilus (black metal musicians love a pseudonym) growls like something between a demon and Dr. Claw, Inspector Gadget's nemesis. But a surprising sense of melody slithers out of the chords. Beneath all the shrieking, the guitars create dramatic, colorful swaths of movement, keeping the songs from devolving into dissonance.

"Eternal Wax of the Candelabra" takes the sonic concept even further. The band expertly balances spooky, gothic-tinged heaviness with moments of beauty and deceptive stillness. Night Spires excel at establishing an atmosphere shrouded in mystery and unknown horror, not unlike the way an H.P. Lovecraft story gnaws with growing dread. You get taken in by a curiosity for the darkness only to find it suddenly surrounds you.

The epic title track closes the EP and is a study in showcasing power without speed. More than 12 minutes long, the song moves at a glacial pace, full of guitar feedback and a drumbeat more like a series of explosions than a rhythm. The record ends on a note of heavy drama. One can all but see the credits roll after, like an old Hammer horror film.

On Whispers From the Grave, Night Spires fly the black metal flag proudly but offer enough deviation to stand out from their peers. Check it out at nightspires.bandcamp.com.