Nicole Georges on Cartoon School, Her Graphic Memoir and Psychics 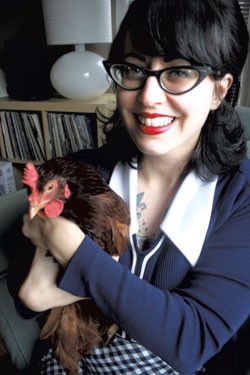 As a kid, cartoonist Nicole Georges was always told her father had died of colon cancer. It was a lie she believed right up until her 23rd birthday, when she was given a session with a psychic as a birthday gift by her girlfriend.

In Georges’ sparse, black-and-white rendering of the scene, which opens her award-winning 2013 graphic memoir Calling Dr. Laura, that psychic informs Georges that her father is definitely alive. The revelation, later confirmed by Georges’ sister, catalyzed a five-year period of truth seeking for the noted cartoonist, who is currently living and working in White River Junction as the 2013-2014 fellow at the Center for Cartoon Studies.

“I tried to tell as many stories as I could, as honestly as I could, so that people could identify with the experience,” says Georges, now 33, of the scenes she drew up from that period and crafted into the book-length memoir.

Like Alison Bechdel’s 2006 graphic memoir Fun Home, Georges’ book is raking in positive reviews across the board. And it’s earned her fans in high places. MSNBC’s Rachel Maddow, for one, says in a book blurb that Calling Dr. Laura is “an engrossing, lovable, smart and ultimately poignant trip through a harrowing emotional bottleneck in family life.”

At the time of her encounter with the psychic, Georges was living in Portland, Ore. She was dating women but closeted with her Midwestern family, and working as a karaoke jockey at a dive bar. The book flashes back to revealing moments from her younger years: her family’s moves, encounters with various stepfathers, absences from school and chronic constipation (perhaps triggered subconsciously by the trauma of the “colon cancer” lie, the book hints). It’s a coming-of-age story that touches on themes of love, honesty and identity far beyond the search for the truth about her father. Georges’ interactions with her pets, her romantic partners and her willful, severe, initially homophobic mother form the backbone of the story.

Parts of Calling Dr. Laura were first published in Georges’ zine (Invincible Summer, launched in 2000), including the titular anecdote, in which Georges calls the raging-conservative talk-show host for advice about calling her mother out over the lie of her father’s death. Georges presented the “Dr. Laura” comic while touring with the lesbian-feminist spoken word collective Sister Spit in 2007. After a reading in Brooklyn, an agent approached her, asking if Georges had enough personal material to make a book-length story.

She did. Making comics about her life had been Georges’ creative and therapeutic outlet of choice since early childhood. “I started making autobiographical zines and stories when I was 13 years old in Kansas,” she says. “I was doing comics about myself and my dog and the things that I did during the day.”

Georges remembers “getting in trouble for running out of paper and drawing on the walls,” occasionally creating inappropriate or risqué material such as “an illustrated poem for my mom, because I had this idea that women liked to be told they had big boobs.” Georges first got the idea to draw for a living when she ordered her first zine online. It cost a dollar, and when it arrived she was initially devastated to find that it was terrible. Then she recognized an opportunity: “Why couldn’t I be the one getting those dollars?”

“I was obsessed with zines that were personal and that dealt with traumas and family relations,” Georges adds. “I took for granted that I was sitting on a giant story that one day I could tell.”

Years later, when creating Calling Dr. Laura, she stayed faithful to that impulse.

“I included a lot of embarrassing things [and] things I wasn’t proud of,” Georges says. “I wanted to have some kind of intimacy with readers that way, so I hope that intimacy and vulnerability helps real people and makes them have stakes in the characters.”

The cartoonist has been in Vermont since receiving the prestigious annual fellowship at the cartoon school. As a fellow, she works with students on individual projects and has a studio and an intern to help with her own. She first heard of CCS from Portland cartoonist friends who had themselves visited, taught or held fellowships at the school and spoken highly of the experience.

“From what I heard — and this has proven true — it’s a hive of cartooning energy and creativity,” Georges says. “Vermont is a great place to hunker down, get snowed in and get some serious writing done.”

So far, she’s completed a 2014 animal calendar, has “met some of her heroes,” is about to launch a community “punk aerobics” (aka “Homorobics”) class, and is working on a second book proposal. The new book, too, will begin with a psychic, Georges reveals — this time, an animal whisperer.