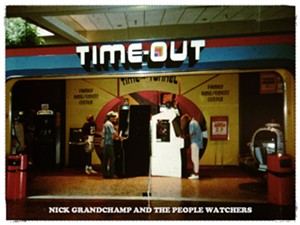 If you know Vermont punk, chances are you're familiar with Nick Grandchamp. The Rutland guitar player and singer made his mark as part of the now-defunct hardcore band Get a Grip and the melodic punk trio Sink or Swim. In September, he released Time-Out, the first album from his solo project, Nick Grandchamp and the People Watchers.

It's an apt name. In many of the album's 10 rapid-fire tracks — the longest clocks in at just under three minutes, the shortest under 30 seconds — Grandchamp's lyrics suggest that the rocker not only observes people but looks out for the underdog. That's a role to which it seems he can relate.

"Standing at the bus stop looking like a fucking freak / No you're not staying home tonight, no you're hanging with me," Grandchamp growls in "Your Own Way," a pop-punk salute to letting one's freak flag fly. If you're feeling like an outsider, Grandchamp is your cheerleader, commanding, "Be who you wanna be!" amid chants of "Whoa, whoa" that invite audience participation, supporting the idea of finding community in otherness.

Though he's the guiding force and sole songwriter behind this project, Grandchamp has a little help from his friends. Vermont folk singer and Grandchamp's former music teacher, Phil Henry, handled engineering, mixing and mastering. The People Watchers also include drummer Ruston Fettig and bassist Matt Kimball, both bandmates from Sink or Swim. Chris Macie plays bass, vocals and drums, and Sarah Wallis — or was that Sherri DuPree Bemis from Eisley? — adds additional vocals.

Time-Out is available at nickgrandchampandthepeoplewatchers.bandcamp.com.