Newport Gets a New Locavore Restaurant and Tasting Center 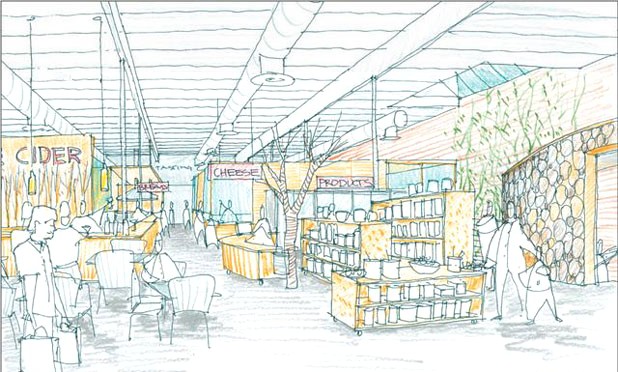 Necessity was indeed the mother of invention in the birth of the Northeast Kingdom Tasting Center.

With only 800 square feet in which to manufacture her Eden Ice Cider, Eleanor Leger had outgrown her basement. Expanding on her own property didn’t seem like a viable option, and Leger was ready for a larger tasting room, too. “When we get calls from tourists, I need to clean my kitchen,” she jokes of her current home-based setup.

But, when Leger conceived the Northeast Kingdom Tasting Center two years ago, she didn’t see it as just a place for her products. “The whole idea was to create a culinary destination for all the fantastic products in the Northeast Kingdom,” she says of the building at 150 Main Street in Newport, which will open next month.

While a large basement space is devoted to manufacturing ice cider, the Center’s main floor will feature Leger’s tasting room and a shop selling NEK-produced cheeses, including ones from the Cellars at Jasper Hill and Lazy Lady Farm. Butternut Mountain Farm and Jocelyn & Cinta’s Bake Shop will offer sweet treats. But perhaps the most visible addition will be Brown Dog Bistro and Butcher Shop, an expansion of Newport Natural Market and Café.

Owner Stephen Breault, who plans to open the locavore restaurant in July, credits Prohibition Pig in Waterbury and Parker Pie Co. in Glover as his inspirations.

Though Breault promises to supply options for gluten-free, vegetarian and vegan diners, he says the attached butcher shop will serve as a source for much of the fare, with Spring Hill Angus in Orleans as the main beef source. Burgers will feature prominently on the menu but not dominate it: Breault says chef Bill Small (previously of Blue Moon Café in Stowe) is currently whittling his menu down from 150 seasonal items to about 40. On the pub side, the bistro will have eight local brews on tap and a big selection of bottles to go with lunch and dinner, served seven days a week.