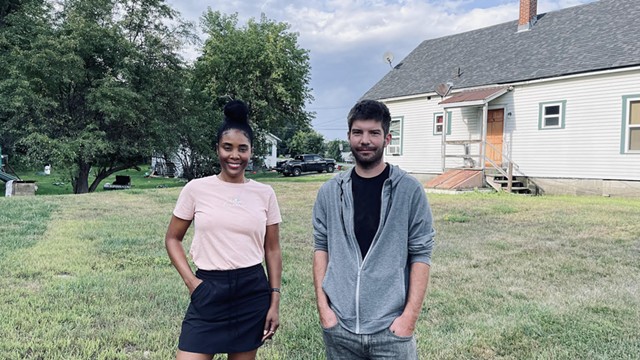 Livable Real Estate Cooperative, a group formed last year to create more housing in the upper Connecticut River Valley, is raising money for its first property, a group of three structures in Thetford.

Livable has signed a contract to buy a mobile home, a single-family home and a three-unit home in the village center, said Nick Clark, who cofounded  the co-op last fall. The properties, listed together at $474,000, are part of a parcel that includes Wings Market & Deli, a grocery store that is also for sale but not part of the purchase. The housing  is all currently leased, Clark said on Tuesday. The co-op's purchase will ensure that the units remain housing.

“If someone wanted to build a Dollar General and take down the triplex to increase parking, these units could be lost,” Clark said, adding that the co-op will also ensure they’re not turned into short-term rentals, which is common in the area.

Upper Valley Employers Pledge Millions to Build New Homes
By Anne Wallace Allen
News
Vermont is experiencing a shortage of affordable housing, and the need is particularly acute in the upper Connecticut River Valley, where prices have risen sharply. Keys to the Valley, a housing initiative organized by regional commissions in New Hampshire and Vermont, estimates that 10,000 new homes will be needed by 2030 to meet the  demand for homes in the area. The rental vacancy rate in the Connecticut River Valley is about 1 percent, said Andrew Winter, executive director of the Twin Pines Housing Trust, which builds and manages affordable housing. The trust is building several rental projects, as well as homes in Woodstock that it will offer for sale.

Clark, 34, a freelance web developer who is president of the Hanover Food Co-op board, created Livable last fall to do something about the housing crisis.  The crisis makes it difficult for families to move to the area and suppresses hiring, he said.

"Long-term, [Livable] has to be financially sustainable, but nobody involved in this thinks we're going to get rich and pass off huge returns to investors," he said.

Clark and his partners initially thought they would focus on creating accessory dwelling units, or ADUs, at existing homes. They still plan to do so, he said, but  he views the purchase as an opportunity to start securing housing.

The deal isn’t expected to be final until November. Meanwhile, Livable  is working to arrange financing from the Cooperative Fund of the Northeast, a Massachusetts lender that works specifically with cooperative enterprises.

To raise a 20 percent down payment, Clark has created a membership drive for the co-op. He's asking community members to invest in return for equity and a right to vote when decisions are made.

He said the co-op’s goal is to create small-scale development.

“We’re trying to leverage the assets that community members already own," he said. “Our focus isn’t commercial development or big apartment buildings.”