Newbies and Stars at the Middlebury New Filmmakers Fest 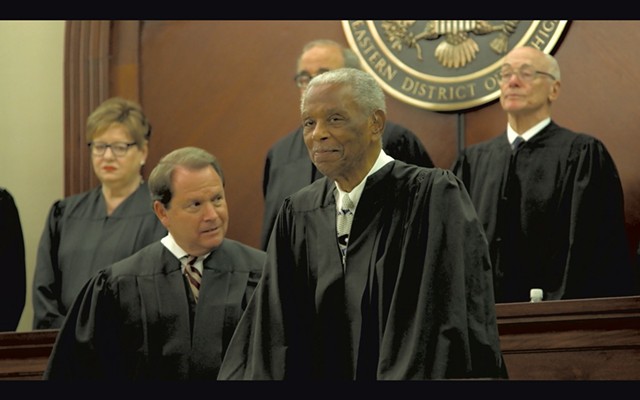 When Jesse Nesser received an email from Jay Craven, artistic director of the Middlebury New Filmmakers Festival, asking if he'd be interested in appearing at the fest with his movie on opening night, he was blown away.

"I remember thinking, Is the sky blue?" Nesser recalls. "I've never had a movie open a festival, so this was such an unexpected honor."

Nesser's second feature film, Walk With Me: The Trials of Damon J. Keith, is distinctive for the age disparity between its director and subject. Nesser, a Marlboro College graduate and former student of Craven, is 26. Damon J. Keith, a pioneering African American federal district judge from Detroit, is 94. Keith is perhaps best known for ruling in 1971 — much to the ire of the Nixon administration — that warrantless wiretaps by the U.S. government were unconstitutional. He still serves as a senior judge on the U.S. Court of Appeals for the Sixth Circuit, and will appear at the festival on August 25 for a Q&A session with Nesser and Craven.

"This is the heart of the festival, when you have someone relatively young able to deliver a film of this scope, polish and interest," says MNFF producer Lloyd Komesar, who suggested to Craven that Nesser's film be selected for opening night. "We had more than one that we could have chosen, but this one stood out for all the reasons that are intrinsic to our festival, which is this continuing celebration of first- and second-time filmmakers and trying to give a platform to their voices as they emerge."

While the second annual MNFF will primarily focus on up-and-coming filmmakers, it will also turn back the clock to pay tribute to Barbara Kopple, the prolific documentarian whose first feature film, Harlan County U.S.A., won the 1976 Oscar for Best Documentary Feature. Kopple will attend the festival and receive a special VTeddy Award — the MNFF's version of an honorary Oscar. In addition to programming a 40th-anniversary screening of Harlan County, MNFF has bestowed closing-night honors on Kopple's latest film, Miss Sharon Jones!, a chronicle of the soul singer's battle with pancreatic cancer.

Kopple's 2015 film Hot Type: 150 Years of the Nation, an inside look at the modern-day newsroom of the United States' oldest weekly magazine, will also be shown, reflecting a fest focus on the interrelationship between film and journalism. It will be complemented by a screening of Andrew Rossi's 2011 documentary Page One: Inside The New York Times, a profile of the venerable newspaper's tentative transition to the online era. The Page One screening will be followed by a panel discussion featuring New York Times senior editor Hamilton Boardman and Lindsay Crouse, coordinating producer of the Times' Op-Docs video channel. The discussion will also include Seven Days publisher and coeditor Paula Routly.

"I think journalism has never been more important," Craven says, "and it's also never been, in some ways, more uncertain of its future."

The special guests don't stop there. Married thespians Maggie Gyllenhaal and Peter Sarsgaard will join Craven for a coffee-fueled conversation about the craft of acting. Author Russell Banks will sit down with writer and Middlebury College professor Jay Parini for a discussion on the nuances of adapting books for the silver screen.

Despite the numerous special events and the inclusion of older films in the curated section of the program, the bulk of the four-day festival stays true to its mission of spotlighting the work of first- and second-time filmmakers. More than 75 short and feature films will be screened at the festival, most of which were submitted by filmmakers for consideration. About 370 films from 27 countries were submitted in 2016, according to Komesar — a 15 percent increase from last year.

A dozen of the selections have some sort of Vermont connection, such as southern Vermont native Jesse Kreitzer's coal-mining tale "Black Canaries" — which has the rare distinction of being shot on Super 35mm film — and the short "Sunday 1287," which was written and directed by Burlington Police Chief Brandon del Pozo.

Craven's directorial career received a boost when his first narrative short, "High Water" (1989), won a Golden Gate Award at the San Francisco International Film Festival. He knows the important role festivals play for new filmmakers, he says. Craven points to a modern irony: Advancements in digital technology have made it easier than ever to make movies, even as changes in film distribution and the decline of art-house cinemas have made it more difficult for filmmakers to get their work seen by audiences in a theatrical setting.

"The challenge is to continue to build a culture of film where people come together for moments of shared community and a shared cinema experience," Craven says. "Because that's how films were created, and that's what I believe they were intended for."