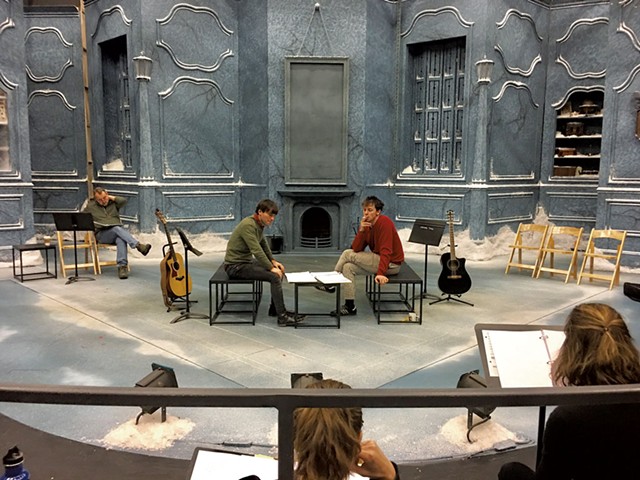 'Tis the season for everyone to put away their Christmas lights and turn on the stage lights. Or something like that. With apologies to the Scrooges and Grinches, most thespians take a break during the holidays, if only to gear up for the new season that starts in January. We've rounded up a few full productions and staged readings that theatergoers can look forward to in coming months.

Interested in the freshest of fresh takes? Northern Stage will present three recently developed plays as part of its New Works Now festival, which runs Friday through Sunday, January 19 through 21, at Barrette Center for the Arts in White River Junction. Now entering its fifth year, the fest features staged readings followed by a post-performance conversation with actors, playwrights and directors.

The 2018 New Works Now includes a one-woman show about modern femme adolescence, a "lush rock fable" about disconnects in our political system, and a drama exploring the intergenerational relationships of three female family members.

There must be something dramatic in that White River water: In March, Thetford-based director Perry Allison will mount a production of 1776, the musical by Sherman Edwards that debuted on Broadway in 1969. The show, to be staged at Briggs Opera House, portrays the founding fathers during the signing of the Declaration of Independence.

Allison's interest in 1776 extends beyond the stage. "I have always loved this play and feel that in our current political climate, it is more relevant than ever," she writes in a release. "It asks us to consider what it means to live in a democracy. It asks us to consider how we can come together, even with disparate points of view, for the good of our country."

To encourage full family participation, the company will admit kids for free. Local politicians, activists and scholars will be invited to participate in discussions with the audience, though none is yet named on the website for what Allison calls the 1776 Project: Creating a Community Conversation.

Like Northern Stage, the Middlebury Actors Workshop will present staged readings this year; they're part of its Cutting Edge series, which launched last year and focuses on newer works. Sex With Strangers by Laura Eason is the first — on February 25 — of four plays curated and directed by Becky Strum. Chronicling the discomfiting sexual relationship between a twentysomething male writer and the object of his affection, a fortysomething female novelist, the 2014 show sounds like a good way to heat things up on a winter evening. Other readings in the series will happen in June, September and November.

The Vermont Shakespeare Festival keeps things old-school but with a contemporary and sometimes boozy twist. On February 11, Vino and the Bard is the first event in VSF's 2018 Salon Series, which presents plays written or inspired by Shakespeare. For Vino, thespians will present scenes from the Bard's works on the ArtsRiot stage, while the audience can sip wines from Shelburne Vineyard.

Three other "inspired-by" salon events are spread throughout the year, while VSF's centerpiece Shakespeare production this summer will be The Taming of the Shrew.

MOXIE Productions' One & Only Series returns for its second year to the Grange Hall Cultural Center in Waterbury. The 2018 run of solo performances opens on January 20 with Ethan Bowen of Bald Mountain Theater performing an adaptation of Tim O'Brien's Vietnam story "Sweetheart of the Song Tra Bong" (from his collection The Things They Carried). It's about a young soldier who flies his high school sweetheart to a Vietnamese outpost, where "the country and the war transform her."

Later installments include a dinosaur-centric performance, a play centered on the wife of philosopher Karl Marx, and a biographical show about film actress and inventor Hedy Lamarr, among others.

In Vermont, it seems, all the state's a stage. This is just a sampling of theater experiences to come.