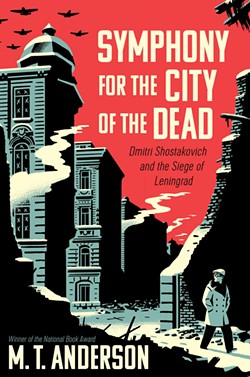 Many composers' music provides uncomplicated listening enjoyment, but the work of Dmitri Shostakovich seems to require that we weigh its intent. The Russian began composing when Lenin was in power and lived through Stalin's murderous regime. He could have been shot for writing a piece that displeased the authorities — the fate of many less internationally acclaimed composers.

So a debate has long raged in music scholarship: Does Shostakovich's music kowtow to Soviet whims or express a veiled dissidence? Or, as M.T. Anderson puts it in his new book Symphony for the City of the Dead: Dmitri Shostakovich and the Siege of Leningrad, "Was he brave or was he a coward?"

Anderson is a National Book Award-winning author of numerous young adult and middle-grade novels and a recent transplant to Plainfield. As he sees it, the debate has generally been settled in favor of an anti-Stalinist Shostakovich. But arguments continue over the intentions of the music, and the author nimbly assesses them in his book about "the power of music and its meanings." That makes the work equally informative for his intended readership — 15 and older — and music enthusiasts of all ages.

Symphony offers a gripping historical narrative of Russia between 1906 and the end of World War II. Anderson focuses on the shy, nervous composer and his Symphony No. 7 in C Major, op. 60 — a work that emerged already fraught with meanings, both intended and perceived. Shostakovich began the symphony in 1941 in his native Leningrad, during the early months of the Nazi siege of that city. That siege lasted nearly two and a half years, through brutal winters, depriving residents of electricity, heat, water and food. Eventually, citizens turned to cannibalism to survive.

Shostakovich was spared the grimmer days. Four months into the siege, the Communist Party flew the already well-known composer to Moscow. From there, he made his way to a city beyond the Wehrmacht's reach, Kuybyshev, where he finished the symphony and dedicated it to his beloved dying hometown.

The Soviet government was keen on exploiting the "Leningrad Symphony," as it was quickly dubbed, to win the hearts, minds and pockets of its former enemies, the Allied forces. The party's leaders clearly viewed the symphony — especially the first movement, in which a charming little military march disintegrates into a crashing portrait of horror — as a narrative of the Nazi advance.

Later, writes Anderson, others would see the symphony as an encoded denunciation of Stalin's ruthless rule. According to the recollections of a friend, Shostakovich himself announced after he completed the work, "This music is about all forms of terror, slavery, the bondage of the spirit."

What first piqued Anderson's imagination, he says during a phone interview, was the story of how the symphony's score made it halfway across a war-torn globe to its American premiere. When he launched into the book's five years of research and writing, Anderson discovered that researchers hadn't yet documented the path of the small box containing a microfilm of the score. Nor did they know who had transported it.

Perhaps Shostakovich experts hadn't looked into that aspect, Anderson suggests with a laugh, because "No one else has my sort of Tintin approach" to the topic.

The author learned that the score had been taken across Russia by train, flown to Iran, trucked through Iraq to Egypt, flown across North Africa to Brazil and, finally, flown to Miami; Washington, D.C.; and New York. Anderson details the participating secret agents and organizations in a forthcoming academic article. In New York, he notes, the microfilm nearly ended up in a cafeteria trash bin — an incident he uses in the prologue to set the tone of his book.

"I wanted to capture that spy-novel feel," explains Anderson, who is best known for his young adult historical series The Astonishing Life of Octavian Nothing: Traitor to the Nation, and the popular early dystopian Feed.

The author's research led him to another surprising discovery: Many key archival documents were right here in Vermont. Edward Clark Carter, who cofounded the Russian War Relief Fund in 1940, donated his papers to the University of Vermont. The RWRF made Shostakovich's Symphony No. 7 a centerpiece of its fundraising activities.

Spy stories weren't Anderson's only impetus to write Symphony. The author, who has also written a middle-grade biography of Handel, is a lifelong Shostakovich enthusiast. At 17, Anderson recalls, "I heard the eighth [string] quartet and was immediately impressed by it. Also, his cello concerto — suddenly the harmony swerved in a way I'd never heard before. I became a fan."

Since then, Anderson has learned that Shostakovich has served many others as a "gateway drug" to classical music.

The eighth quartet was featured at a reading Anderson gave last month at the Vermont College of Fine Arts, where he taught writing for five years and now serves on the board. Four musicians from the Vermont Symphony Orchestra played it, including violinist Sofia Hirsch, who says the event drew 80 people.

Anderson says that knowing the geopolitical context of Shostakovich's work doesn't box in its meanings. He heard and felt the "emotionality" of the Leningrad Symphony for the first time long before he knew its full background; listeners still debate its significance.

"That's the great thing about classical music," Anderson adds. "Each time you can get something new out of it. It can grow with you through the whole of your life."