In January, Nadia Dole relaunched Vergennes Laundry, the 10-year-old Main Street bakery and café she bought in the fall of 2020. She had deep-cleaned, repainted and installed new shelving. She had opened up the work space in front of the floor-to-ceiling wood-fired oven and added a 5-by-6-foot black walnut baking table on wheels.

Dole had also been busy baking. The glass-fronted pastry case held tender-crumbed scones in flavors such as cheddar-French herb and red currant-lemon. Tea-style cakes — pistachio and lime; lemon and poppy seed; banana, chocolate and coconut made without gluten — were scattered with edible flowers or coconut flakes. She had perfected her own version of cardamom buns, a Vergennes Laundry favorite: elegantly twisted like a ballet mistress' chignon, generously spice-flecked, buttery and crunchy with deeply browned undersides.

As Dole worked to establish herself, an early customer put a finger on what the new owner was feeling.

"This woman kind of pointed at me and said, 'You have big shoes to fill,'" Dole recalled with a touch of chagrin. But then, she added gratefully, "Another customer, a guy, turned around and said to her, 'Maybe she wants to wear her own shoes.'"

After the woman left, the man said to Dole encouragingly, "You be you."

Dole has had 49 years to figure out who she is — but, as with most people, each new endeavor requires taking a step back to determine how to apply the best of herself.

The Montréal native currently splits her time between Vergennes and her family's Putney farm. She is an accomplished photographer with a successful business that hosts photography and film workshops around the world in locations from Iceland to Morocco to Vermont. Dole has also cooked and baked professionally, including running the historic Store at Five Corners and its associated Green River Farm in Williamstown, Mass., from 2015 to 2017.

Dole has warm brown eyes and expressive eyebrows and exudes a generosity of spirit. "I'm always checking in on everyone," she said. "It's just who I am."

Her achievements aside, it's a challenge to take over an establishment with the distinctive personality and reputation that Vergennes Laundry founders Julianne and Didier Murat cultivated.

Barely a year after the couple launched their wood-fired bakery in 2010, they earned a Food & Wine magazine feature that lavished descriptors including "superlative," "perfect" and "excellent" on their blistered tarts, naturally leavened bread and intensely caramelized canelé pastries.

Dole was among the original bakery's devoted fans. She had become a regular on trips between her family's home, then in Bennington, and Montréal. "I thought it was perfect: the minimalist approach, the pastries," she said. "It wasn't fussy."

When the Murats put the bakery on the market in 2017, Dole seriously considered buying it, but its price and standard of perfection deterred her.

Local chef Christian Kruse purchased the business and renamed it Vergennes Laundry by CK. He continued to offer some baked goods and added seated brunch and dinners. Kruse, who recently became executive chef at Black Flannel Brewing in Essex Junction, announced in December 2019 that the business was again for sale. This time, Dole made an offer; it was not accepted until May, after several other deals fell through due to COVID-19.

Dole originally planned to rename the bakery, but, she explained, "as I was writing the business plan, between all the published articles, the cult following," it seemed a waste.

With critical help from her initial team of two (now three, and growing), Dole's version of Vergennes Laundry is emerging.

The bakery is currently open for takeout Wednesday through Sunday, offering baked goods, coffee and sandwiches, as well as bread and a selection of homewares and specialty grocery items. Wednesdays and Saturdays are bread-baking days — and Dole will soon add Sundays. The rotating roster includes rye and country loaves, Provençal-style fougasse, and baguettes — all baked in the wood-fired oven.

About 70 percent of Vergennes Laundry's baked offerings are made in the oven. The pastries are mostly European influenced but with Dole's spin. She makes plain brioche and a version filled with pastry cream, peach, hazelnut crumble and poppy seeds. Slices of the rich, soft bread are also layered with almond cream, blueberries and almonds to make bostock.

Dole's husband favors the plain brioche. Her 8-year-old daughter's list includes a lemon, ricotta and white chocolate Basque-style cheesecake, which the baker promises is "barely sweet." Dole herself gravitates toward the cardamom buns and blood orange-cardamom cake. If she were baking just for herself, Dole said with a smile, "The whole case would be cardamom."

Despite its varied and mouthwatering contents, Dole is not quite satisfied. "The pastry case is evolving. It's not yet where I want it to be," she said. Those who crave canelés — including her daughter — will have to wait. "I have to perfect my recipe," Dole said.

"I fill your cup, but mine has to be full, too." Nadia Dole tweet this

Although Dole is a seasoned baker, the wood-fired oven was new to her. It comes with a steep learning curve and high demands on a baker's attention and time. On bread-baking days, Dole wakes at 1 a.m. to tend to the fire. "We call it the beast," she said with a rueful laugh. "I call it my master."

The pandemic has hampered Dole's wood-fired-baking education. If not for COVID-19, she said, "I would have been on a plane going to learn how to make pizza dough," among other global specialties.

The normally frequent traveler also misses the inspiration she finds in faraway places. "I fill your cup, but mine has to be full, too," Dole said. For now, her focus is necessarily close to home.

On a recent spring Saturday, the bakery door opened to a tapestry of scents. Butter mingled with citrus; toast swirled with coffee. The glass case displayed more than half a dozen sweet and savory pastries, while a cubby behind the counter held baguettes from the morning's bake. A staff member pulled meticulous shots of espresso.

The coffee is on theme, all wood-fire-roasted by Coffee Lab International in Waterbury, a sister business to Vermont Artisan Coffee & Tea. The beans are single-origin and sourced mostly from organic and female-run farms. Dole received certification to do her own roasting at Coffee Lab, but that is on hold during the pandemic.

Dole's aesthetic is immediately evident in the casually elegant bucket of tulips on the floor, the nature-toned linen aprons hanging on wall hooks, and a richly hued oil painting of giant pomegranates gracing the white beadboard wall. (When she first fell in love with the pricey piece of art 30 years ago, Dole recalled, "My husband said, 'You want a house, or you want a painting?'")

The built-in benches that once seated guests are now scattered with an eclectic selection of home goods and pantry items: blocks of pastel soap, slender beeswax candle tapers, bottles of wine and bars of chocolate.

Dole's épicerie, as she calls it, is named for the French word for grocery. She stocks many of her favorite foodstuffs: squat ceramic jars of Pommery mustard; olive oil from Portugal, Italy and Tunisia; and fancifully illustrated boxes holding tins of preserved seafood. There are also glass jars of dried hibiscus petals her mother brings back from Egypt and the black currant tea favored by Montréal university students. 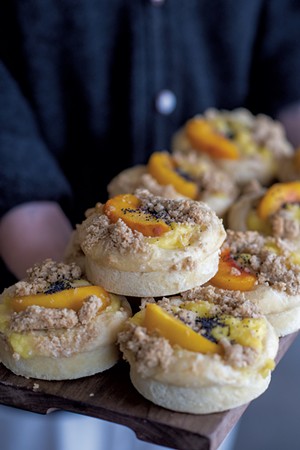 During the afternoon, the team has fun with le goûter. "In France, [that means] an afternoon treat or pick-me-up," Dole explained. It might be a drink like a recently offered Yemeni-spiced mocha coffee, or a velvety dark chocolate and hazelnut-caramel tartlet with a perfectly crisp buttery crust.

In June, Dole said, Vergennes Laundry will start offering dinners a few nights a week. She will be partnering with chef Justin Wright, an alum of the Inn at Shelburne Farms, Hen of the Wood and Sister restaurant in Oakland, Calif. He most recently served as opening chef for the now-paused C'est Ça in Burlington and hosted Caspian Oyster Depot pop-ups in Bristol.

What might dinner guests expect? "The unexpected!" Dole replied with a laugh. "There are incredible things being grown here, and we have this gorgeous wood fire."

Dole has to continually remind herself that it will take time to become established in her own shoes, harking back to that early supportive customer. "I'm still trying to get there, but I'm on that path," she said.

About five weeks ago, Dole lost her beloved rescue horse, a 32-year-old Percheron named Tolstoy. Though devastating, his death helped her take a step back. Most days after the bakery closes, Dole said, she makes time to pack a picnic for her family and they drive around Addison County looking for a farm to buy.

"Even though I'm still working 19 hours a day, it's much different. I'm more peaceful," she said. "He just reminded me to breathe."