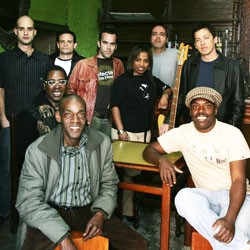 If you follow world music, it’s a familiar narrative: A once proud musical tradition is in danger of disappearing from its native land in the face of modernization and/or social or political strife. Then, an artist comes along and resuscitates the genre, usually by recording a star-studded album that honors the music of his or her homeland. Typically, those projects — such as Wátina by the late Garifuna singer Andy Palacio, or Zebu Nation by Madagascar’s Razia Said — favor a traditional aesthetic with light modern accents such as electric guitar. For American-centric readers, it’s a similar phenomenon to the resurgence of interest in American-roots music that followed the release of the Coen brothers’ film, O Brother, Where Art Thou? and that movie’s chart-topping soundtrack. But there is another way to go.

Novalima have helped spark a renewed interest in the Afro-Peruvian music native to their home country of Peru. But rather than remain strictly faithful to the traditions of their source material, the band melds their music with a decidedly modern, and wholly unlikely, genre: electronica. This Thursday, June 30, they’ll bring that danceable fusion of old and new to the Higher Ground Showcase Lounge, kicking off the Global Music Voyage series curated by Charlotte-based world-music label Cumbancha.

Before they became Novalima, the members of the band began playing together as teenagers in the 1990s. Drummer Grimaldo del Solar describes the music scene in their hometown of Lima as reflective of the social and political strife in Peru at the time.

“Those were difficult times in Peru,” he says. “There was a lot of terrorism and violence. It was hard.” He adds that there was a strong underground punk scene in Lima in those days. “It was powerful music.”

Under president Alberto Fujimori in the 1990s, the country began a slow recovery. Following his resignation in 2000, Peru continued to prosper under president Alan García. Del Solar says that as the country’s fortunes improved, so did the arts and music scene in Lima. More venues began to appear, and with them more bands, including Novalima.

“Before that, the scene almost died,” he recalls. Now, he says Lima’s rock scene rivals that of many of his South American neighbors, such as Brazil and Argentina, both of which are known for vibrant pop cultures. “There are a lot of bands releasing music now,” del Solar says. “They play rock, or reggae, hip-hop. There is a good mix.”

At the forefront of Lima’s musical renaissance is Novalima, one of a handful of bands that emerged from the ashes of Peru’s political instability and kept the capital’s rock scene on life support — albeit from abroad.

Novalima released their self-titled debut in 2003 while each of the band’s members lived in far-flung corners of the world, including Barcelona, London and Hong Kong. They would write material independently, composing on computers, and then email ideas to each other. The result of those pan-global collaborations was a provocative fusion of Afro-Peruvian music and, of all things, electronica.

“It was an experiment,” says del Solar. “And we liked what came out of it.”

That’s an understatement. The band came away with more than 50 tracks, enough for four or five full-length records heavily rooted in electronic dance music. On their next effort, Afro, released in 2006 with the band members reunited in Lima, Novalima took those leftover ideas and expanded upon them, further highlighting traditional native rhythms within the context of modern dance music.

The band’s most recent album, Coba Coba, was released on Cumbancha in 2009. Just as Afro represented an evolution from the band’s first offering, Coba Coba finds Novalima delving even deeper into the indigenous music of Peru. Where Novalima, the album, was essentially a house record with Afro-Peruvian flourishes, Coba Coba reverses the equation, with the band relying even more on live instruments and traditional influences. But it’s still one grooving little record, and del Solar says that the melding of those superficially disparate styles is less unlikely than it may seem. In fact, he says he finds electronica and Afro-Peruvian music quite complementary.

“The cool thing about Afro-Peruvian music is that it is very percussive,” he says. “It’s very rhythmic by nature, so it goes really good with electronica.”

Del Solar says he expected some degree of backlash from Afro-Peruvian traditionalists for his band’s boundary-pushing experiments. Purists of all stripes — whether they be American folkies, jazz aficionados or world-music junkies — tend to guard the integrity of their genres fiercely. However, the band’s reception both at home and abroad has been almost universally positive.

“They actually seem to like what we do,” del Solar says. Novalima’s updated version has inspired younger generations to discover the band’s source material and helped spark a resurgence of interest in traditional Afro-Peruvian music.

“It was almost lost to time,” says del Solar. “Kids would never take an interest in it before. But now they go to concerts, they buy the music. They are interested in the tradition.”

And, of course, dancing.