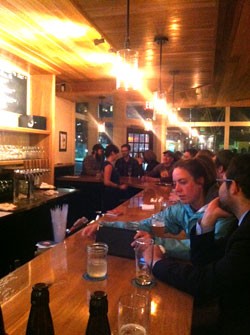 Warm weather has a way of hatching new restaurants and bars. No matter where you live in the state, chances are there’s a new place in your ’hood — or at least on the horizon.

In nearby Colchester, a sports bar named the Penalty Box will open in June inside the former Venue Nightclub space. The new spot is the brainchild of Colchester resident Marko Jurenvic, who envisions a neighborhood watering hole with big-screen televisions and an accessible beer lineup that includes both Switchback Brewing Company and Bud Light.

Also a music booking agent, Jurenvic is painting the pub walls with murals of Elvis Presley and Frank Sinatra to set the mood for live music and karaoke. “I like music, I like food, I like a good time,” he says of his impetus for opening the spot at 127 Porters Point Road.

As reported here last week, Penny Cluse Café co-owner Charles Reeves and his wife, Holly Cluse, are in the process of purchasing the building next door to their 15-year-old eatery for a new venture to be called, aptly, Lucky Next Door.

The spot at Burlington’s 163 Cherry Street will open by September and be devoted to “espresso, smoothies, beer and wine, with limited food service,” Reeves says.

Sounds a little bit like the new Café Verde in Rutland. The fast-casual spot opened in April at 136 Strongs Avenue with a menu of smoothies, wraps and burritos. Owner Gary Maravalli owned and operated Rutland’s Vermont Bagel Café until it closed a decade ago.

The Whammy Bar in Calais has been open for a while — since last October — and it’s a great example of rural diversification. Nancy and Artie Toulis have owned the Maple Corner Store, which also houses the post office, for seven years. In anticipation of mail delivery changes, now it’s a local gathering spot after hours, too. The Toulises busted through two storage-room walls to create a cozy, brightly hued bar.

At 31 West County Road, the Whammy Bar serves up six tap beers, a raft of wines and spirits, and a menu of Mediterranean-inspired fare such as antipasto, pizza, dolmades, crostini and wings. It hosts live music acts weekly.

Turns out Artie Toulis hails from a family of restaurateurs.

The original print version of this article was headlined "Entrées, No Exits"