Vermont is warming faster and getting more rainfall than previously estimated, according to a sweeping new climate report published on Tuesday.

More than that, the 2021 Vermont Climate Assessment, only the second of its kind, offers vivid details of how the climate crisis will continue to reshape life in the Green Mountain State over the coming decades. The more detailed portrait can aid Vermonters as they search for ways to adapt, the authors said.

"I hope that this information is empowering in making those decisions on those more local scales," said Gillian Galford. She's a University of Vermont climate scientist and lead author of the report, which was prepared by the school's Gund Institute for Environment.

Winter is warming faster than twice the overall annual rate, leading to fewer below-zero nights and earlier thaws. tweet this

The prognosis is not catastrophic for humans, but the effects will be profound and wide-ranging. Dozens of bird species, including the iconic common loon and hermit thrush, are likely to disappear from Vermont within 25 years. Shifting weather patterns will require massive investments to manage water and cope with floods. Recreational industries such as skiing will be forced to adapt, as will farmers.

Vermont is warmer by 2 degrees Fahrenheit, on average, than in 1900, researchers found, and may warm by another 5 to 9 degrees by 2100. The state is significantly wetter, too: Average annual rainfall is up by 21 percent since 1900. 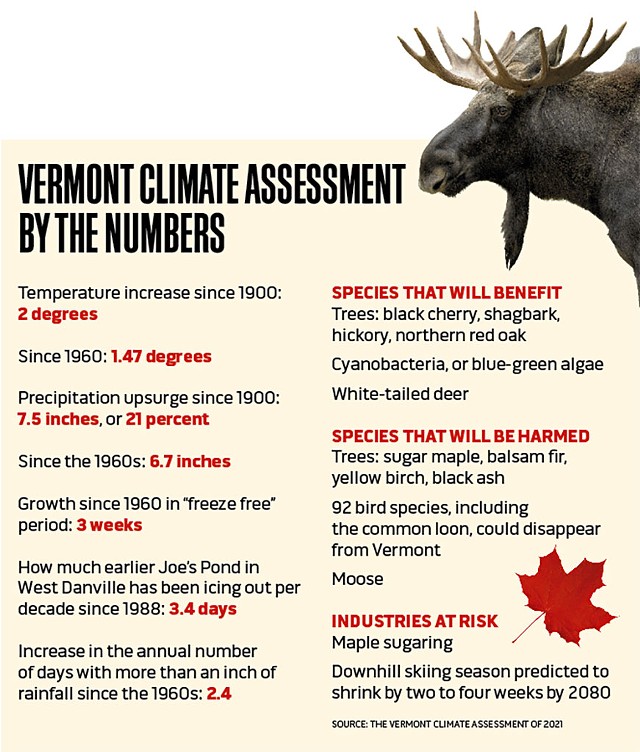 Crucially, the warmer-and-wetter trend does not play out uniformly across all seasons. Winter is warming faster than twice the overall annual rate, leading to fewer below-zero nights and earlier thaws. The growing season will continue to lengthen — currently by a rate of nearly one day per year — but with more erratic conditions, including drought.

Researchers documented the changing conditions by analyzing data from 18 weather stations across the state. They also interviewed more than 150 people and incorporated less scientific forms of data, such as community ice-out records at six lakes and ponds, in an effort to capture local effects. The report incorporates the same set of global emissions scenarios as those used in prevailing international climate research.

The Vermont Climate Assessment is a follow-up to a 2014 Gund Institute study that was the first in the United States to examine climate change at a state level, according to UVM. One of its lead authors, state climatologist Lesley-Ann Dupigny-Giroux, is also an author on the latest National Climate Assessment commissioned by Congress. Many of the key findings in the 2021 report are not new to those who have been following the climate crisis. But it compiles them in a way that serves as a "reality check" for Vermont, said Ben Edgerly Walsh, climate and energy program director at the Vermont Public Interest Research Group.

"While perhaps Vermont is, in some ways, in a better position than other places," he said, "we are also going to be seeing significant and increasingly severe effects."

The report's release comes just as the Vermont Climate Council, a 23-member state panel of which coauthor Dupigny-Giroux is a member, is putting together an action plan that will serve as a road map to reducing emissions and preparing for climate impacts. The council must adopt a plan by December 1.

"We're not just talking about... something that might happen in the future anymore." Gillian Galford tweet this

Researchers have already shared their findings with other members of the climate council to inform their work, the Gund Institute's director of policy, Stephen Posner, said.

The state's climate planning was mandated by the Global Warming Solutions Act that the Vermont legislature adopted last year. The act also sets a legally binding requirement for Vermont to reduce greenhouse gas pollution to 26 percent below 2005 levels by 2025. The emissions targets become more stringent through 2050.

More frequent and severe flooding is among the chief challenges the report identifies. Wetter winters, earlier spring thaws and more intense storms are likely to lead to more events such as Tropical Storm Irene, which caused widespread damage across the state a decade ago.

"The flooding events of 2011 may serve as a warning for what is to come and emphasize the need for action," the report states.

Global models have projected that the Northeast's biggest jumps in precipitation will be in winter and spring. So far, that has not been the case in Vermont, where the increased rain has fallen in summertime, the study found. The authors suggest that the difference might be due to the prevalence of small thunderstorms that dump heavy rain but aren't captured in more regional analyses.

The concentration of rain into more intense storms is increasingly countered by longer dry spells in between, Galford said, noting the drought that hit Vermont last year.

Vermont farmers will need to invest in irrigation and water conservation methods to withstand the less predictable rainfall, the report states.

Less snow will fall, though the authors predict that downhill skiing may remain viable over the next half century. Warmer winters will be a boon to the state's white-tailed deer population, creating a potential management challenge, as the popularity of hunting has steadily waned. Summers may remain milder in Vermont than in many other states, but they will be affected. Cyanobacteria, the blue-green algae whose blooms close beaches and have caused concerns about public health, will continue to thrive, as will disease-carrying ticks and mosquitoes. Hiking trails may wear out more quickly due to longer seasonal use and soil erosion.

Some aspects of Vermont's climate future remain difficult to predict, the report notes, as various changes are likely to compound in complex ways. There are already notable differences among regions of the state. In southern Vermont, Galford said, "climate change is already progressing more rapidly."

Vermont is increasingly viewed as a potential haven for people looking to flee parts of the country that are experiencing even more extreme effects of a warming globe, such as dangerous forest fires, coastal flooding and extreme heat. The assessment's authors found a dearth of evidence to support that prediction. But they took note of how Vermont's real estate market surged during the pandemic, driven by urban flight.

The original print version of this article was headlined "Shorter Winters, Hotter Summers"