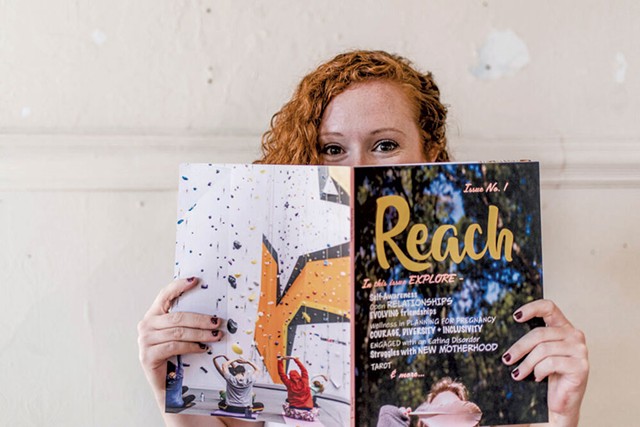 The past few years have not been great for print magazines. The list of glossies that have dramatically reduced or ceased print publication since 2017 includes Nylon, SELF, Teen Vogue, Redbook, Glamour, Seventeen, Mad, Brides, Ebony, Money, ESPN the Magazine and Pacific Standard. In September, the nonprofit feminist quarterly Bitch took to social media with a campaign called Keep Bitch in Print and fundraised the $150,000 it needed to print its next issue.

But some publications are still thriving in print (ahem), and many readers are loyal to the medium, such as Burlington resident Sara Clark. She's the cofounder of Reach, a new women's quarterly magazine that launched last week.

While Clark took nine months off work to stay home with her newborn daughter, she devoured magazines. But, she said, she couldn't find any content that felt relevant to what she was going through as a new mother.

"These magazines, they weren't touching on the everyday struggles," Clark, 28, said. "I guess I just felt like, I love reading so much. I love magazines, and I love the feel of books. But there's not one out there that's giving me what I need and what I want right now. So, why don't we create one?"

"There's a lot of content out there that's super aspirational," agreed Clark's friend and magazine cofounder, Abigail Henderson, 29. She lives in Portland, Maine, and joined in on a recent interview via speakerphone.

Clark and Henderson have been friends since attending St. Lawrence University, where they were roommates and "always collaborating," as Clark put it. For instance, Clark performed in an original show written by Henderson about her experience with an eating disorder. But it wasn't until this year — on March 8, International Women's Day — that Clark texted Henderson with an idea: What if they started a magazine to share women's voices?

"We love sharing women's stories, and we love the idea of creating that and creating a community," Henderson said. "When [Sara] texted me that, I was like, 'Hell yes.' I didn't take a moment to consider it."

Fast-forward six months. At 72 pages, the inaugural issue of Reach includes a poem about polyamory, advice on fertility planning, an essay on using tarot as a tool for healing and other real-life stories and essays. Clark will celebrate the launch with a party and open-mic story and poetry night on Thursday, October 3, at Soapbox Arts in Burlington. The event, loosely based on the Moth story slams, will also feature performances by local comedians Tina Friml and Josie Leavitt.

"I really wanted to do an event, a live event, to go along with this," Clark said. "This is a magazine, but I also want it to be almost like a community and create a space where the people who read [Reach] can come together."

Clark is an office manager and mom of an 18-month-old; Henderson works in marketing and just went through the process of selling a house and buying another. Though busy, the women were motivated by their vision to self-fund the first issue of Reach. Clark did the layout and design in intermittent scraps of free time.

"As I'm sure any artist or side hustler knows, it takes a lot of commitment," Clark said. "It would be so easy to say, 'No, I'm tired, I'm not going to work on this' ... which I wanted to do many times. But we've just been so driven by this mission and getting this out there."

Next steps include distributing the $10 magazine to Burlington-area shops. The two are already planning the next issue, which they hope to release in early 2020. They're planning to self-fund that issue, too, but hope revenue from sales of the first issue will help. They're also reaching out to advertisers, mostly in Vermont. And while the first issue was mostly filled with content from women Clark and Henderson know personally, they hope to get more submissions from people they don't know in the future, including fiction submissions that fit the magazine's theme. Contributors are paid, usually between $25 and $50, which Clark said is important to them despite their small budget.

Clark and Henderson, who call themselves Reach's "curators," worked with contributors to develop ideas and prompts for the writing and art that fill the magazine's pages, but most of that content is unedited beyond proofreading. It was important to them to capture the authentic voices of the contributors, they said, who include many from Vermont but also women from as far away as Salt Lake City, Chicago and Los Angeles.

"What we really wanted to do is just share a story, as if you went to a great TED Talk or something. Or you had coffee with someone who told you about their experience that really helped you and stuck with you," Henderson said. "Community building is about sharing stories and experiences to help people grow. And that's really, I feel like, what's missing from a lot of magazines — that sense of community, that sense of shared experience. Instead of just a look at what you could be, this is a look at who we are."