New Pressure on Old Buildings in the Queen City 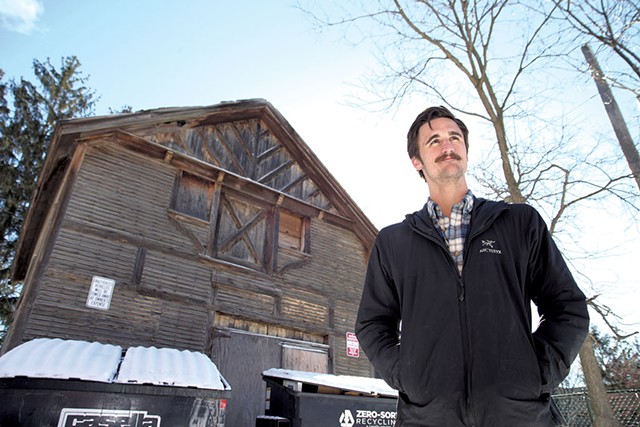 It survived fire, pigeon infestation and the 1960s-era urban renewal program that razed a whole section of downtown Burlington. But last month, the now-sagging carriage barn near the corner of Pearl and Pine streets faced its biggest existential threat: an official application to tear it down.

The distinctive two-story barn, which is listed on Vermont's State Register of Historic Places, sits behind the Pearl Street Diner, near a red-brick apartment house and the Cathedral of the Immaculate Conception.

Hinsdale Properties, one of the largest landlords in Burlington, sought the city's permission to tear down the circa-1890 barn and create two additional parking spots for its apartment house on Pine.

Burlington Department of Planning and Zoning staff recommended against the demolition. They argued that the charred, weathered-wood structure, with its still-handsome Tudor stickwork, was an important remnant of Burlington's Little Italy neighborhood — which was mostly obliterated during a 27-acre "urban renewal" in the heart of the city in the 1960s.

It's one of a few structures that escaped by "their chinny chin chin," said Mary O'Neil, principal city planner, in an interview with Seven Days. "This little block of Pine Street is really a tangible reminder of what that neighborhood looked like until about 1964. You get down to, maybe it's not the last survivor, but it's close," she said.

After resistance from city planners, Hinsdale Properties has abandoned the demolition bid, according to Jacob Hinsdale. "We shifted our plan when we found out no one was on our side."

The zoning kerfuffle is an example of steady development pressure on Burlington's old barns, garages and other outbuildings, as well as aging houses. In a city with little open space, parking problems and a housing crunch, developers are eyeing old structures — more specifically, the land on which they sit.

Being listed on the state or national registers of historic places does not prevent a property from being torn down, but local ordinances can use that status to require a more thorough review, as Burlington does. That "doesn't mean at the end of the day it can't be demolished, but it puts in place a process for really looking at the whole scenario," said Devin Colman, the Vermont state architectural historian.

The Sara Holbrook Community Center, a nonprofit that offers preschool and other youth programs, is currently seeking permits to demolish two aging duplexes at 56 and 58 North Avenue to allow for a 5,334 square-foot expansion and a dozen new parking spaces. Neither of the properties is listed on historic registers.

South of Main Street, local developer Erik Hoekstra is proposing to demolish several structures: a 19th-century single-family home at 202 South Champlain Street; and the rear addition on a former schoolhouse from the same era at 194 South Champlain Street. He also wants to lose that property's long, low garage.

He has carefully restored the front of the old schoolhouse but wants to put a duplex behind it.

Hoekstra claims there's little value in the structures he wants to take down, both of which are on the National Register of Historic Places. He said that the foundation of the house at 202 Champlain is failing, the roof is shot, and ceilings and stairwells do not meet code. "It is a modest house covered in vinyl siding that has no significant historic features," he said in an email.

Hoekstra would replace the teardown with a modern house that he says would complement the block. He wrote: "Some of the best urban historic neighborhoods have a blend of historic and modern. In Europe contemporary buildings are boldly placed in historic contexts all the time ... highlighting the old, showing how contemporary incursions can function harmoniously in historic contexts, keeping historic districts relevant and vibrant."

The permit review is in early stages, but the city's O'Neil has already raised concerns about the demolition — especially about the house, built between 1853 and 1869. She is focused to a lesser degree on the addition, which was built before 1889, according to fire insurance maps, and the 1920s-era garage.

"As neighborhood character is established by a collection of buildings that have a contextual relationship to each other, the Battery King Street Historic District is a record of those buildings; few of which were singularly notable examples. It was the cohesiveness and relationship between the buildings that gave credibility to the significance of the district," O'Neil wrote in a memorandum to the Burlington Development Review Board.

O'Neil added that with past teardowns in the same area, "the fabric of the historic district is fraying with the proposed additional loss."

Such projects have occasionally led to fights in Burlington. One of the more notable examples was in the 1970s, when the Medical Center Hospital of Vermont, as it was then called, sought to demolish the Bishop DeGoesbriand house at 52 South Williams Street. A community group filed an injunction to stop the wrecking ball, but lost in court. The site became and remains a parking lot.

Some residents also unsuccessfully fought the urban renewal that cleared entire streets and made way for parking garages, new office buildings, apartments and the Burlington Town Center. Today, the mall is viewed as outdated, and its owner is pursuing a $200 million renovation. 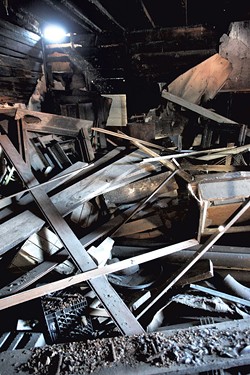 This year, the National Historic Preservation Act turns 50. The U.S. Congress passed it after a wave of post-World War II construction led to the demolition of many important historic structures, including New York City's landmark Penn Station.

The demise of that architectural gem is now widely viewed as a terrible mistake. But five decades after the Preservation Act, there's still uncertainty about how to strike the right balance between preservation and progress. The Burlington carriage barn illustrates the challenge on a micro level.

During the past 10 years, Hinsdale Properties has, with city approval, torn down at least three aging garages behind rentals it owns at 14 North Winooski, 10 Hungerford Terrace and, last summer, at 99-101 North Union. "We were on a roll, and, from my perspective, the last one to be done was the garage at Pine Street," Hinsdale said. The other three outbuildings were not listed on the state registry, though, and did not have the historic character of the carriage barn.

"This one is just a different case, is what it comes down to," said Hinsdale. "Now we found out that everyone else likes it and wants to keep it standing, so we're going with that." His late father founded the Hinsdale Properties rental empire, which includes 156 units. His mother, Irene Hinsdale, heads the company.

Jacob Hinsdale opened the carriage barn for Seven Days last Friday morning. Shafts of sun streamed through a hole in the slate roof, revealing an old cast-iron bathtub in one corner. Pigeon feathers and guano piled up over mounds of wood planking and debris. A charred section marked the spot where a fire some years ago nearly took the building. Graffiti on the exterior had been painted over, and the windows had been boarded up in an effort to keep out vandals and drug users who sometimes break in.

The company will spend $15,000 to shore up the building and contemplate options. Demolition would have cost less than half that — $6,000. Hinsdale said the building would be used for storage in the short term, and the company would consider other uses down the line — but he has no specific plan.

Adapting such a structure for modern use is a challenge. There are numerous examples of barns and outbuildings that have been converted to apartments, studios and home office space in Burlington — but at a cost.

"Unless you have access to a lot of financial means, it's hard enough just to maintain the house you live in, let alone a second building in your backyard that may or may not be of great use," Colman said.

Burlington has incentives to help. If the Hinsdales wanted to turn their carriage barn into a residential space, the city would waive requirements to provide additional parking — a big win in downtown Burlington, where spots are prized. There's also a federal grant program to help with renovations on this type of historic structure.

Still, renovation dollars can add up, and in some cases, it's easier for property owners to seek approval to tear down a structure or to do "demolition by neglect" — as in, let a building cave in.

One of the saddest scenarios is when a historically significant building comes down to accommodate cars, Colman said: "You end up with acres of surface parking which really isn't that hospitable or attractive, and you lose the character of the city, the places that kind of anchor you. They tell you where you are." As he noted: "A parking lot in Burlington looks the same as a parking lot in Kansas or California. It's asphalt."

Colman, a Burlington resident, is happy the barn is staying put stand. He says the building has often caught his eye. "It's one of those hidden gems, and it's so unexpected in downtown Burlington to have a carriage barn like this still standing," Colman said. "It's just really a nice little piece of Burlington history that has survived."