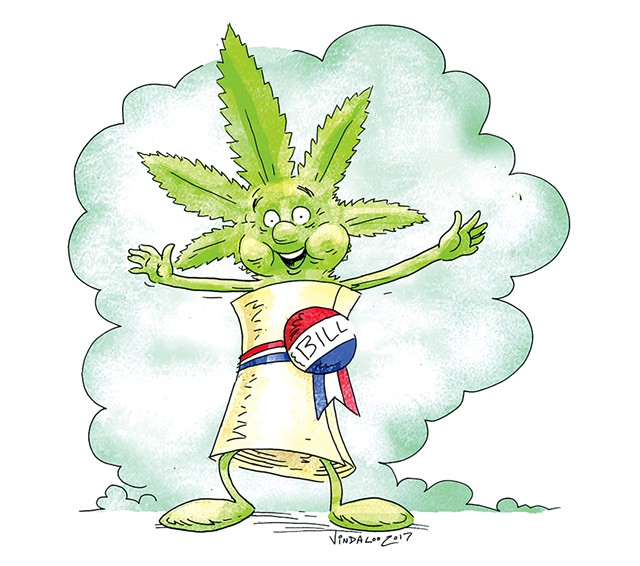 On the day of Donald Trump's presidential inauguration, members of a marijuana advocacy group stood on Dupont Circle in Washington, D.C., handing out free joints. Hundreds lined up. The gifts were perfectly legal.

In D.C., marijuana has been legal since 2015 — sort of. Adults can possess, consume and share up to two ounces and grow up to six plants. But they can't buy or sell cannabis, and there are no marijuana lounges like the ones in Colorado.

Now, a version of D.C.'s marijuana law has been introduced in the Vermont legislature. It comes a year after House members refused to agree to a Senate bill that would have fully legalized the drug and allowed taxed, regulated sales.

All indications are that both the House and Senate are prepared to pass the compromise, although it is unclear whether Gov. Phil Scott would sign such a bill.

The proposal is timely because Massachusetts voted to legalize pot last year. If the marijuana compromise were to pass, Vermonters would be able to buy small amounts in the Bay State and bring it home for personal use without fear of arrest.

Last year, House Judiciary Committee chair Maxine Grad (D-Moretown) stood on the House floor and declared that legalization would open the door to corporate pot shops, which was "not the Vermont way."

This year, Grad's name is atop the revised bill that she argues would give Vermonters the stay-out-of-jail card they seek without creating corporate weed.

"Adults have a right to make an adult decision as long as it doesn't affect anybody else," said Burditt, who personally supports legalization but voted against it last year because his constituents so firmly opposed it. Now he's telling them that a new law is likely no matter how he votes, so he might as well have some say over the details.

Still, Burditt said, he represents the most conservative district in Rutland County. "I'm going to get a lot of pushback."

Under this year's bill, adults would be able to grow, consume and share marijuana, but they wouldn't be able to buy or sell it. They could possess up to two ounces of marijuana, as well as two mature and seven immature plants.

Grad said the bill borrows heavily from D.C.'s law. "We're hearing that it has been working there," she said.

There are pros and cons to the system, said David Grasso, a D.C. city councilor who would prefer full legalization but considers the current law better than nothing.

"People are no longer getting arrested for possession of marijuana," he said in a telephone interview. On the other hand, "It's still not simple to get ahold of. You have to grow it or buy it illegally."

People try creative ways of obtaining and distributing the quasi-legal plant. Enterprising "sellers" have thrown parties with an entry fee that provides attendees free marijuana. One company offered a juice-delivery service, and the juice came with a free side of "love" — aka pot.

Those efforts turned out not to be legal, Grasso said. Vermont should expect boundary-pushing enterprises if it adopts a similar law, he said: "You'll have that, for sure."

Fans of legalization say the new Vermont bill, H.170, doesn't go as far as they would like but is welcome nevertheless.

"We completely applaud it," said Matt Simon, New England political director for the Marijuana Policy Project. "Adults should not be punished for using a substance that is objectively less harmful than alcohol."

Dave Silberman, a Middlebury lawyer who has been advocating for marijuana legalization, said the D.C.-style law would go a long way toward eliminating unnecessary arrests. But full legalization, he argued, would shift a Wild West, black-market industry to a safer, taxed and regulated market.

Grad said the tone of the House debate over pot has shifted because of the extensive discussion in Vermont, and because voters in both Massachusetts and Maine legalized it. Those states are likely to have marijuana stores by mid-2018.

"Retail stores opening would be a real game-changer because any Vermonter could just go over the border and get it," Simon said.

Grad agreed that those states' initiatives mean Vermont will have to deal with legal marijuana no matter what the state does on its own. But, she said, watching Maine and Massachusetts officials scramble to create systems to regulate retail sales has reinforced for her that Vermont's not ready for full legalization. "I think we are doing it the right way," she said.

The prospects for passing a D.C.-style bill also improved because Grad's committee this year has fewer members who are adamantly opposed to legalization.

"The dynamic has changed. Therefore, it'll be much easier to get this through," said committee member Rep. Gary Viens (R-Newport).

The former U.S. Border Patrol agent voted against legalization last year but might go along with this year's proposal if lawmakers also take steps to keep marijuana-impaired drivers off the road. A separate bill, also sponsored by Grad, would make it a crime to drive with both a 0.05 percent blood alcohol count and any detectable tetrahydrocannabinol, or THC, from marijuana. Another bill would allow the use of roadside saliva tests for marijuana.

"If those things pass, she has my vote," Viens said.

The Senate supported full legalization last year and thus is expected to support H.170. "I would still prefer a regulated system, but it is a step forward," said Senate Judiciary Committee chair Dick Sears (D-Bennington).

But does this bicameral support mean legalization will make it into law? That's less clear. A year ago, Democratic governor Peter Shumlin was a strong supporter. Scott, a Republican, is not, but he also hasn't shut the door.

"I didn't say, 'Never.' I said, 'Not now,'" Scott said Thursday at a press conference. "I still believe we should be focused on economic issues."

He avoided answering questions about whether he finds D.C.-style legalization more palatable than a full tax-and-regulate system. "We'll take a look at whatever they pass," he said, indicating that the impact on highway safety and teenage use remain concerns.

Scott's newly appointed Department of Public Safety commissioner, Tom Anderson, a former federal prosecutor, is among those scheduled to testify Thursday when Grad's committee starts work on the bill.

Scott is not alone in raising objections. Vergennes Police Chief George Merkel, president of the Vermont Police Association, will be lobbying against passage. Two ounces is a lot of pot, he argued.

"You've got that much marijuana, the prospects of trading and selling it is great," he said.

Merkel also said too few police officers are trained to detect drivers impaired by drug use. "We're seeing more and more prevalence of marijuana on the roads," he said.

The proposed legislation would do nothing to add to police training, nor would it generate revenue to pay for more drug-recognition officers, as the full tax-and-regulate legalization would have.

Lawmakers have another bill to contemplate: proposed changes to the state's medical marijuana program. Sears and Grad have been meeting regularly — something they didn't do last year — to coordinate the two pieces of legislation.

Sears said the proposed medical marijuana legislation addresses complaints that Vermonters have trouble getting access both to the registry and the drug.

Last Thursday, David Crowley, a 70-year-old glaucoma patient from Bennington, told Sears' committee that it took him two months to get his eye doctor to sign the form allowing him onto the medical marijuana registry. Glaucoma is one of the qualifying conditions.

He then drove an hour and a half to buy five marijuana plants at the nearest medical dispensary, in Brattleboro. It'll be three months before those plants yield usable marijuana, he said.

"Now I'm three months driven to the black market," Crowley said. "I'm not a bad guy. I deliver Meals on Wheels ... I happen to smoke pot."

State law doesn't allow those on the registry to both grow their own and buy ready-to-use marijuana from a dispensary. Sears' committee is considering removing that provision.

The bill would also double the number of licensed medical marijuana dispensaries from four to eight, allow them to advertise and to transition from nonprofit to for-profit status, expand the number of medical conditions that qualify Vermonters for medical marijuana, and require training for doctors on the topic.

But senators heard mixed messages about the wisdom of those steps.

"The more it's visible, the more people see it, the more it creates a mixed message for our youth," Chen said.

"My concern is just the market size," he said, noting that only 2,800 Vermonters are on the medical marijuana registry. Maine has eight dispensaries serving 20,000 potential customers, he said.

A better choice, she argued, would be to allow existing dispensaries to open satellite offices and compete with each other. She was denied a request in 2015 to move her dispensary to Williston, where she would have competed with Lynn's shop.

As Sears' committee listened to the arguments, witnesses warned them that stores in Massachusetts and Maine will alter the dynamics not only for recreational use, but also for the medicinal market.

Crowley, the glaucoma patient, urged the committee to legalize marijuana for all adults in Vermont. "Any 21-year-old can walk into a 7-Eleven and buy a pack of cigarettes," he said.

Silberman chimed in: "I urge you and your colleagues in the House to proceed with full legalization."