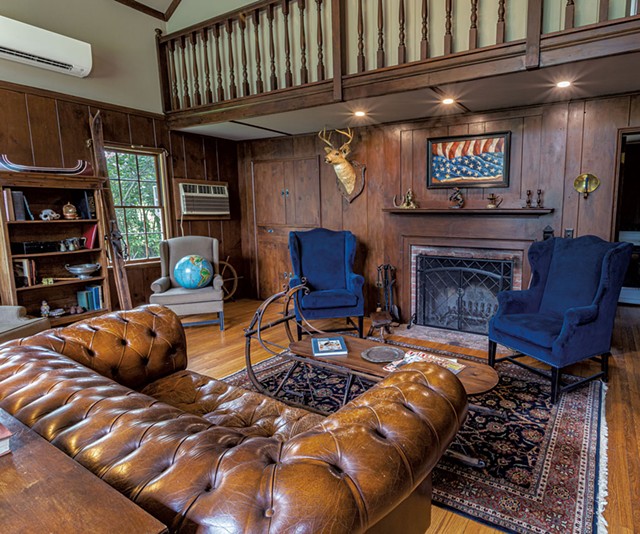 Some historic buildings, including Vermont inns, come with ghosts. But the new owners of a colonial-era inn in Arlington inherited a different set of visitors from the past: corporeal and always friendly.

"The place itself had really strong bones. It just needed a lot of love." Kevin Harter tweet this

In late fall 2019, Kevin and Sue Harter moved from northern Connecticut to buy what was then called the Norman Rockwell Studio and Inn, since renamed Rockwell's Retreat. As the names indicate, the property has a strong connection to one of America's most beloved painters and illustrators, whose depictions of everyday life graced the covers of the Saturday Evening Post for almost half a century. 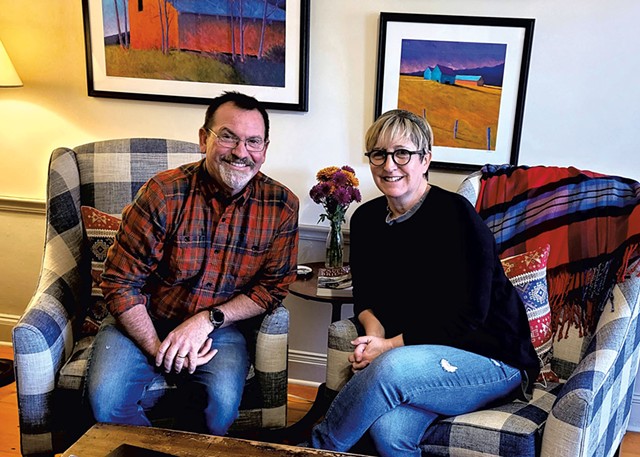 Rockwell resided in Arlington from 1939 to 1953. For a decade, he lived in the main house that is now the inn's central building and painted in the larger of two studios in which guests can now book a stay. 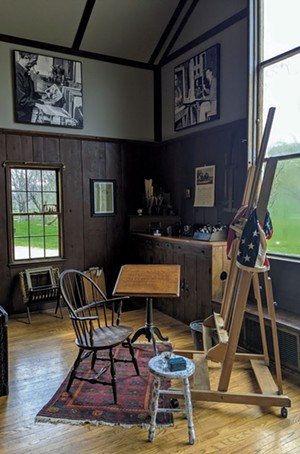 The Harters knew that along with the original structure dating back to 1792, they were also becoming stewards of a slice of treasured Americana. Kevin noted that Rockwell's Vermont tenure was especially prolific and included his famous wartime series, "Four Freedoms." What the couple did not realize was how many Vermonters retained a deep fondness for the artist's former home through their experience of modeling for his work.

Last November, the Harters had barely closed on the business when the first of Rockwell's former models dropped by.

"I was in the little studio in the crawl space draining the pipes," Kevin recalled. "It was muddy and cold and wet, and I'm feeling sorry for myself thinking, What the heck did we just do? And then this car pulled up and an older guy gets out of the car, and he introduces himself as Buddy Edgerton." 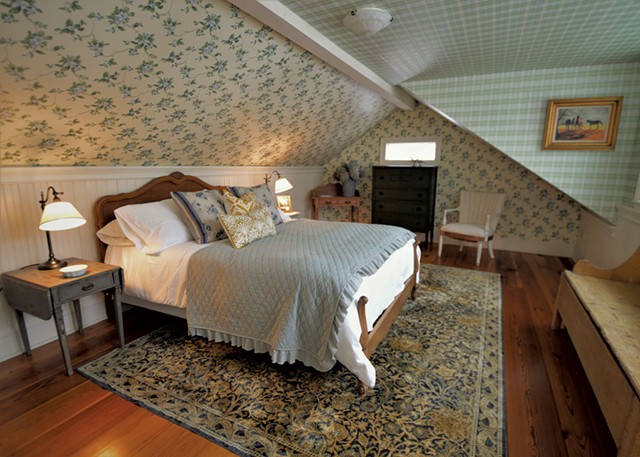 Edgerton, it turned out, grew up in Arlington, and he and members of his family modeled for Rockwell for years, even after the artist moved to Massachusetts. Edgerton also wrote a memoir, The Unknown Rockwell, about the friendship between the families; the Harters now give the book to guests.

Since that warm welcome from Edgerton, several other former models and associates of Rockwell's have generously shared memories and photographs to help the Harters restore the artist's studio, which is a big draw for guests. 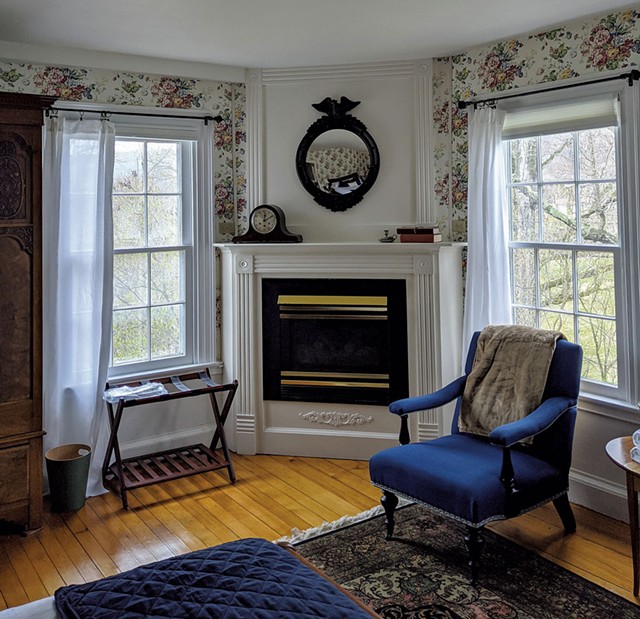 The most recent surprise visitor was Jarvis Rockwell, the artist's oldest son. This time it was a beautiful November day.

"There was a knock on the door," Kevin recounted, "and this guy said, 'Hi, I'm Jarvis.'" The 89-year-old was especially gratified to see the work done to accurately replicate his father's studio, Kevin said. 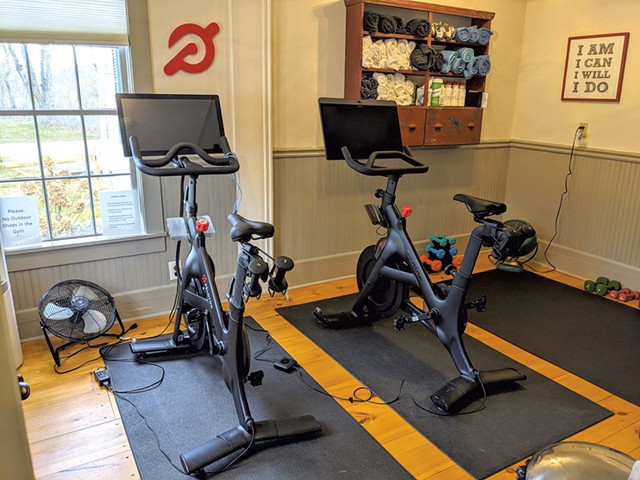 This steady stream of unexpected visitors from the past has been both a wonderful surprise and a gentle reminder of the responsibility of stewardship. "They're just so full of positive energy," Kevin said. "That makes it all worthwhile." 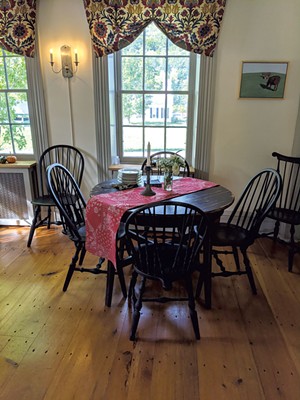 Innkeeping was a career and lifestyle shift for the Harters, who are in their mid-fifties. For years, they dreamed of owning a Vermont inn or bed-and-breakfast, casually looking during many Green Mountain State vacations. When their son was well into his college career, they decided to take the leap.

The couple was not familiar with the Battenkill River area, but Kevin described their encounter with the inn as love at first sight: "You drive over to the covered bridge. To your right, there's an old white church. To the left is an old white single-room schoolhouse. And then straight ahead is the inn. All of it just seems kind of ridiculously quintessential Vermont. We were pretty awestruck."

Between the beautiful location and the manageable size of the seven-room inn, it was already a strong contender. "To have the Rockwell piece was kind of a bonus," Kevin said. 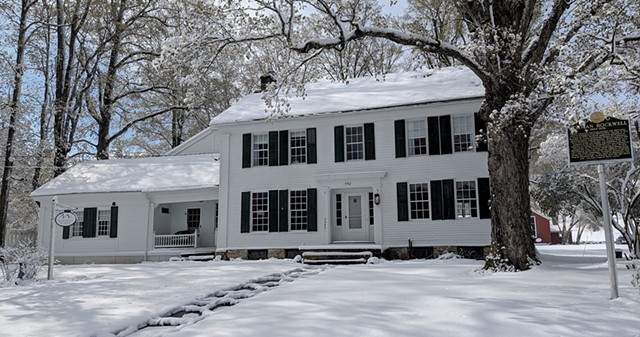 The couple embarked on a significant upgrade and renovation project, totaling about $400,000. "The place itself had really strong bones," Kevin said. "It just needed a lot of love."

Nearly all the cozy bedrooms have a fireplace, and the Harters invested in a new heating and cooling system with control by room. The inn rooms all offer picture-perfect views, while the two studio suites provide the most privacy. The completely redone post-and-beam Half Pint Studio is even dog friendly.

Local designer Mary Sargent guided redecoration of the main inn building to recall the colonial era in an elegant, updated style. Creative touches include a table made from blacksmith bellows and a mirror framed by a horse driving harness collar. While Rockwell's studio has been restored, the rest of the property is not overly crammed with memorabilia. 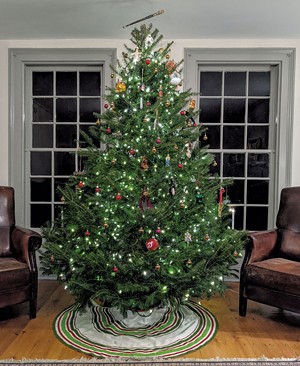 The Harters have also updated the facilities with a workout space equipped with Peloton bikes and a stretching area. A new media/game room is complete with a freezer full of ice cream from the Chocolate Barn in nearby Shaftsbury; guests can help themselves. (Kevin favors the maple-pecan.)

Due to the coronavirus pandemic, their inaugural year as innkeepers has not been exactly as envisioned. But, Kevin allowed, it gave them more time to ramp up gradually. Sue has continued to work remotely in benefits technology while her husband takes the lead innkeeping role.

Kevin is always happy to chat about Rockwell's life and work. He can also guide guests to the best spots to enjoy abundant local outdoor activities, from fly-fishing and tubing on the Battenkill to biking, hiking, snowshoeing and cross-country skiing. For downhill snow sports, it's a 30-minute drive to Bromley Mountain.

Whatever they choose to do, guests will be amply fueled by Kevin's hot breakfasts. His signature frittatas might be filled with sweet potatoes, leeks, sausage, peppers and Vermont feta; inspiration comes from a community-supported agriculture share from Shaftsbury's Clear Brook Farm.

The eggs in those frittatas are local, too. In fact, they are raised by a neighbor whose family modeled for Rockwell.