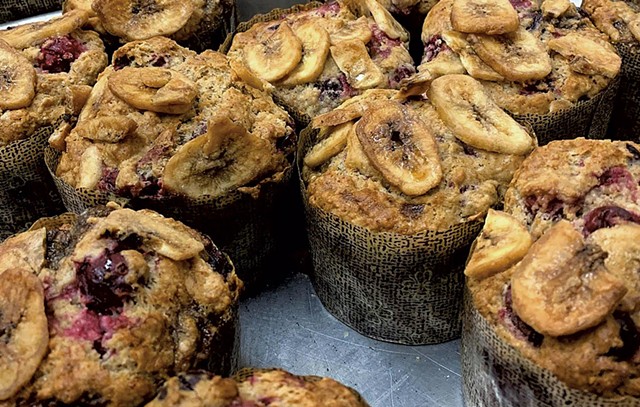 Sarah and Ben Wood, founders and longtime owners of Otter Creek Bakery in Middlebury, sold their business to a Nashville-based entrepreneur at the start of 2020.

The new owner of the bakery and café at 14 College Street is Ned Horton, 59, a Vermont native and graduate of Middlebury Union High School. Horton, who owns property in Addison County, said he was looking for local real estate investments when he learned the bakery was for sale. "I started conversations with Ben and Sarah, and one thing led to another," he said.

"I was looking for the next move in my career, the next big step, and it felt like a good fit," Sato said.

Otter Creek Bakery, open daily, prepares a variety of baked goods and savory offerings such as sandwiches, salads, soups and daily specials. The menu will stay the same, Sato said, with the addition of more vegan items and gluten-free and dairy-free baked goods.

The Woods launched their bakery in 1986 in the Stone Mill, at the current site of the Mad Taco's Middlebury location. For a few years, they operated two businesses, the original one on Otter Creek and the one on Middlebury's College Street, former site of Emilio's Delicatessen.

In 1991, the Woods consolidated into their current space, where Ben ran the savory side of the café and Sarah managed the bakery. They're both working at Otter Creek during the ownership transition.

"We're hiring a baker," Sarah, 57, told Seven Days late Monday morning, after her early-morning baking shift. "I have to find my replacement. We worked hard for this, and we want it to succeed."

Noting the benefits of change, Sarah went on: "We wanted it to have new wings. It's sort of like a baby bird. We're ready to boot it out of the nest, and it can grow up now. We're excited for it."

The original print version of this article was headlined "Changing Hands"